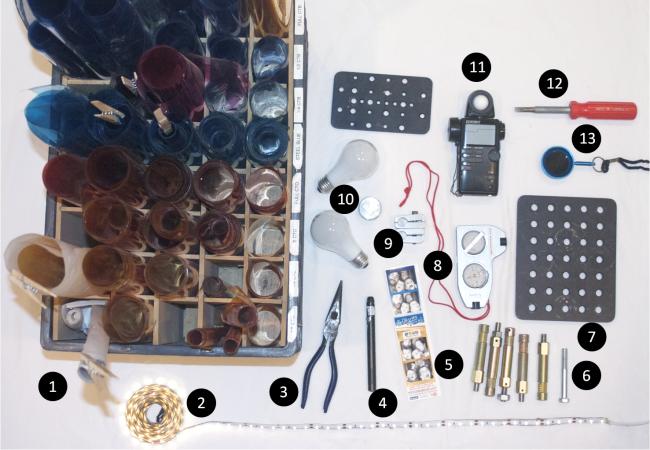 Joe Passarelli was the director of photography on Charlie Kaufman and Duke Johnson’s Anomalisa, the stop-motion marvel that’s in the running for Best Animated Feature at this weekend’s Academy Awards. Before that feature, Passarelli had previously collaborated with Johnson on the latter’s Cartoon Network series Mary Shelley’s Frankenhole and assorted short films.

1. My Gel Crate
Always changing but good to have, so that I can use color to add to the story.

2. LiteGear VHO Pro LED LiteRibbon
Balanced at 3200K, with a dimmer, this is a great tool for hiding lights in small places.

4. Laser Pointer
Extremely helpful when planning out where lights are going with the gaffer and key grip.

5. Photo-Booth Photo of My Wife, Kids and Me
We try to take one at every opportunity. The hardest thing about shooting out of town is not seeing them.

I purchase most of these items, as well as (7) and (9), at Modern Studio Equipment. They’re great to have in order to rig any cameras or lights in places.

Good to know where and when the sun is going to be.

10. A Couple of Low-Watt Light Bulbs
For lamps or any practices that end up in the shot.

The light meter never lies. With so many camera choices with extreme latitude now, and the ease of color grading in post, it’s good to know the lighting ratio you shot at.

Against the Mass Production of Cinema: an Interview with Cinematographer Christopher Doyle
Basic Training as a Wake-Up Call: Tom Antos’ 2Day Cine School