Andrew Garfield Revisits Gwen Stacy’s Sad Fate in Amazing Spider-Man 2: ‘She Had a Hand in Her Own Destiny’ 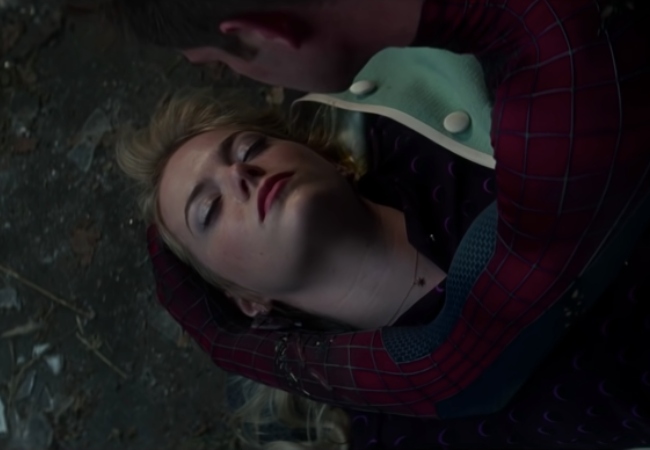 Warning: Spoilers follow for Spider-Man: No Way Home and The Amazing Spider-Man 2. Don’t read on if you don’t want them spoiled.

By now, it’s no secret that Andrew Garfield and Tobey Maguire return to suit up once more as their versions of Spider-Man in Spider-Man: No Way Home. Now that the cat is out of the bag, Garfield is looking back on his time as the web-shooting hero — and the terrible fate of his on-screen love interest, Gwen Stacy, played by Emma Stone.

In an interview with Variety, Garfield said he enjoyed being able to revisit the character of Spider-Man — and getting “a second chance at saving Gwen.”

“We were shooting for two weeks, Tobey [Maguire] and I, but I think we managed to achieve something that is not just showing up and going, ‘Hi! Bye!'” Garfield said. “My Spider-Man got to save his younger brother’s romantic relationship, potentially. And to heal the most traumatic moment of his own life through doing it for his younger brother. Making sure that he didn’t have the same fate, there’s something cosmically beautiful about that. It meant getting a second chance at saving Gwen.”

For those who need a refresher, in 2014’s The Amazing Spider-Man 2, Garfield’s Spider-Man tries to save Gwen from falling to her death after she is knocked off the side of a building during a scuffle with the Green Goblin (Dan DeHaan). But although he shoots a web down to her, it’s too late — the web reaches her just as she hits the ground. It’s a heartbreaking scene.

Variety‘s Matt Donnelly asked Garfield what he would have liked to see for he and Stone’s characters if the screenwriters had decided to bring back Gwen and Kirsten Dunst’s MJ.

“Oh my god, I don’t even know where to start with that. It’s too big,” Garfield said. “Gwen had agency. In our film, on her final day, she shows up. I tried to restrain her from showing up to that scene with Electro [Jamie Foxx]. I knew that it was too dangerous, but she chose to be there. She had a hand in her own destiny in that way, and the movie is about fate.”

However, No Way Home gave Garfield’s Peter Parker a chance at redemption.

“I will say the image of my catching [Zendaya’s] MJ — that was really beautiful and it kind of sold me on the whole thing,” he said.

Watch the dramatic scene from The Amazing Spider-Man 2 below.

Spider-Man: No Way Home is now in theaters. Main Image: Emma Stone as Gwen Stacy and Andrew Garfield as Peter Parker in The Amazing Spider-Man 2. Photo Credit: Sony and Marvel.

In 1967, Sidney Poitier Launched Three Sub-Genres of Film
What If This Isn’t the End of the World?