The Pinch-Hitting Playbook: When Misfortune Claimed Its DP Mid-Shoot, An American in Texas Bounced Back

The indie moviemaker’s mindset can be almost masochistic in its privation; it lives and dies by that ringmaster’s mantra “the show must go on.” But even that spirit has its limits.

Ten days into shooting his upcoming film An American in Texas, Anthony Pedone lost his right arm. Not literally, mind you, but considering he’d been working on the film, his feature directorial debut, since 2010, he might have been open to losing an appendage over losing his DP and creative partner, Bianca Butti.

Having a crew member, especially one as essential as Butti was to An American in Texas, drop out of a production can send even the most ardent of artistic hearts reeling. When disaster strikes, how do you cope?

Pedone and Butti met at Slamdance in 2013. He invited her to screen two of her shorts, “The Proprietor” (which she directed) and “BUNNi” (which she shot), at the Victoria Texas Independent Film Festival, which he’d started the year prior. By that time, Pedone and his childhood friend Stephen Floyd were working on a script. Set in Victoria and loosely based on Pedone and Floyd’s youthful exploits as fringe-dwellers in conservative rural Texas during the outbreak of the First Gulf War, An American in Texas follows a group of disenchanted teens (played by James Paxton, J.R. Villarreal, Charlotte Best, Sam Dillon and Tony Cavalero) through the drug-fueled alienation of inky Texas nights.

It’s a dark film, and in Butti was just the person Pedone needed to externalize that darkness. The look she engineered behind the camera is paramount to the film’s ominous themes. “Without Bianca’s ability conceptualize a visual style for us, it could have still just been a script about stuff we did while we were tripping in 1990,” says Pedone. “We didn’t make a shot list. She did. I just rambled like a crazy person.”

DP Bianca Butti (forefront) with director Anthony Pedone (right) on the set of An American in Texas. Photograph by Stuart Allister

Butti, for her part, characterizes their working relationship as “telepathic.” “I’ll set up a shot, or I’ll start lighting, and he’ll look at it and be like, ‘Yes, that’s exactly what I was thinking.’ We don’t even have to talk to each other, and that doesn’t often happen between DP and director.” Yet the project had its share of touch-and-go. “A lot of our locations came in the last minute, so we couldn’t block. Besides, we didn’t get the actors until they were ready to shoot because we didn’t have the money to bring them out and do rehearsals.”

Butti pushed the right buttons and pulled the right strings. She brought in gaffer Carlos Benavides, fresh from the set of From Dusk Till Dawn: The Series, who in turn brought along camera operator Julian Quiambao, his Red in tow. Working with a SAG ultra low budget of under $250,000, they managed to secure a Red Scarlett and a Red Epic-X, fitted them with Prime CP.2s on camera A and Zeiss Zooms on B, plus an eclectic assortment of wide lenses. They scraped together a small lighting package: some Mole-Richardsons, two Arri kits, a couple of Kinos—“whatever the hell B&H is selling these days,” Pedone chuckles. Together, they made it work.

Then, as preproduction logistics gave way to actual shooting in November 2015, Butti received some life-altering news. “Before preproduction, I had felt a lump in my breast,” she says. “I had a packed work schedule, so I was pushing off looking at what was going on. I told Anthony about it and he freaked out and was like, ‘You need to take care of this.’”

Amidst the throes of production, Butti scheduled doctors’ appointments and lab tests. “We would get home at two in the morning, and I would get up early and go to the hospital. Then I would drive the camera car full of equipment with my first AC, and then shoot all day.”

Ten days into shooting, Butti’s phone rang. “It was the day before Thanksgiving, and we were shooting at Anthony’s father’s house. I got a call from the doctor, who said, ‘I have some bad news. You have cancer.’

“It was a pretty difficult pill to swallow. I was like, ‘I’m in the middle of shooting this movie. I can’t leave. I’ve worked so hard, put all my energy into this project.’” Pedone, though, told her to put herself first.

Butti’s sudden departure could have been the end for the film. “She was the one calling the shots, so everyone lost their boss,” says Pedone. Determined to keep shooting, Pedone and Butti called upon Quiambao, then second camera operator, to step into the DP chair.

Quiambao vividly remembers Butti taking him aside. “She asked if I was willing to lens the rest of the project. She said, ‘You have a great eye and I trust you.’ I realized instantly that I had to go over Bianca’s notes, wed them in my mind, keep with her style. She didn’t give me any specific instructions, which was great, but also nerve-wracking.” After taking over, he texted Butti a single production question, “on how black she liked her blacks.” 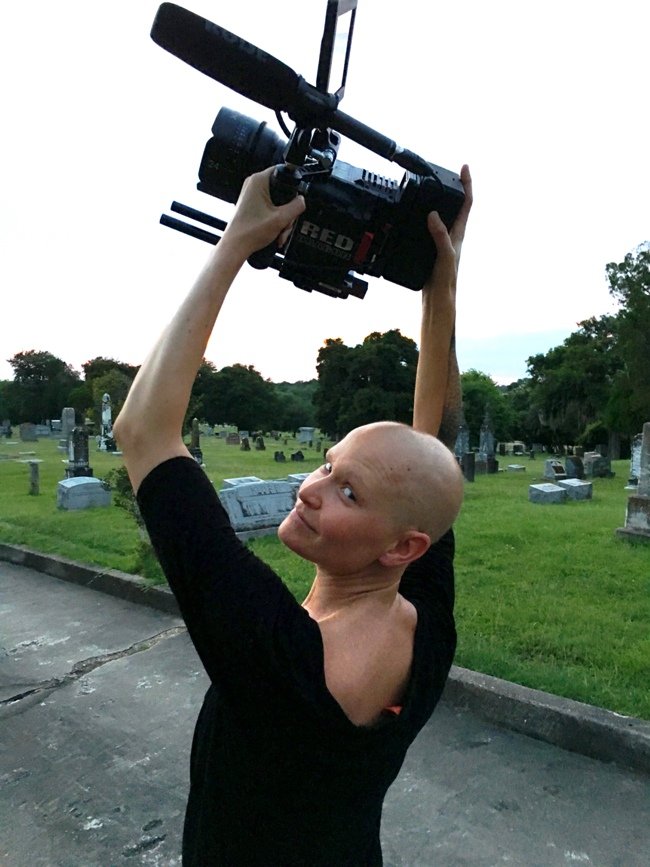 While undergoing treatment, Butti returned to Victoria in June 2016 to shoot pick-ups. Photograph by Anthony Pedone

Not that Butti allowed herself to completely let go. “Bianca was there by phone,” says Pedone. “We’d take screenshots on the monitor and ask her, ‘Is this what you’re thinking here?’ She had the schedule with her and would follow along and give her input. Just because she was gone didn’t mean she was out of the picture.” In June of this year, Butti returned to Victoria for pick-ups; with the project currently in post, she’s involved in the editing as well, as she continues treatment.

The shoot lasted 40 days; Pedone proudly describes it as “balls to the wall.” He feels that the turmoil led to a deeper emotional investment from his cast and crew—who, he says, never balked despite some risky situations. “People were having lamps thrown at them. Actors were climbing flagpoles with no stunt people. We were smashing through walls in an abandoned apartment complex at three in the morning. But nobody bailed. Everybody pulled together.”

The lesson? When the worst happens—as it bound to do—place faith in those who placed faith in you. “Believing in a project and trusting in a complete fucking stranger for $100 a day; that’s a lot to ask of somebody,” says Pedone. “And the spirit that fuels people to do that? Man, bow down to that spirit.”

An American in Texas next screens October 26-29, 2016, at the US in Progress program at the American Film Festival in Wroclaw, Poland. This article appears in MovieMaker‘s Fall 2016 issue; in that version of the article, Julian Quiambao is mistakenly described as a 19-year-old Norwegian. The 19-year-old Norwegian in the crew was named Jens.

Breaking Down the News: In Antonio Campos’ Christine, Rebecca Hall Find the Darkness That She’s Been Looking For
Pot, Hooky and Acts of God: Your Stories of Losing and Replacing Cast or Crew in an Emergency