Everyone makes mistakes. As a moviemaker, you can learn from your own, but it’ll be cheaper and less painful to learn from someone else’s. Luckily, the latest episode of StudioFest’s Demystified offers some advice for indie filmmakers that includes a list of four things you should never do — and you can watch above.

Demystified, narrated by filmmaker Jake Bowen and featuring StudioFest founders Jess Jacklin and Charles Beale, follows them as they try to sell their first feature, Souvenirs, as they work on their second film.

This is the second episode of Demystified, and like the first, it follows Jess, Charles and Jake to the American Film Market, where they get plenty of good advice for indie filmmakers.

Watch the First Episode of Demystified

Their final meeting is with Starz and Lionsgate veteran Kristen Stanisz-Bedno, director of domestic distribution for Vision Films. She gives some honest but tough advice about four things not to do.

The number one thing to avoid? “Making a passion project and expecting it to make millions, not thinking about your audience when you write the script, when you shoot the script,” Stanisz-Bedno says.

Sometimes you’ll consider the potential audience and decide it’s vast, she adds: “If it’s something you’re interested in, take a look at the segment of the population that would also be interested in it. And if the answer is everybody would like to see this film, then make that film and you can make money.”

But other times — especially if you don’t have an internationally recognizable actor in the lead — you may find yourself stuck with what she calls “a $200,000 family album.”

The rest of the video explains how to avoid that scenario. There’s tons of real-world, hands-on advice about everything from how much your budget should be to what kind of camera to use for a cool 35 mm look that tends to be globally marketable.

Stanisz-Bedno also lays down the law: Story and cinematography alone will probably not sell your movie.

As the first episode of Demystified explained, Jacklin and Beale launched StudioFest in 2018 with the goal of finding a writer and director to collaborate on a $50,000 film. Writer Matthew Sorvillo and director Anna Mikami won, and collaborated on Souvenirs.

You can not only watch episodes on YouTube, above, but in podcast form, wherever you listen to podcasts.

You may be wondering: How do I submit to StudioFest? It so happens that applications are open now. The festival is seeking both writers and directors, and one writer and one director are paired up each year.

StudioFest started in the Catskills region of New York before moving to Ojai last year, and this year travels to Austin.

The winners of last year’s StudioFest, director Ryan Oksenberg and writer Lowam Eyasu, are in preproduction on their feature alongside festival founders/producers Jacklin and Beale.

Oksenberg’s winning film was a darkly comic twist on the typical zombie movie. Eyasu won with a scene from a script about a complicated family dynamic. 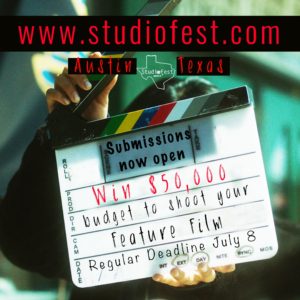