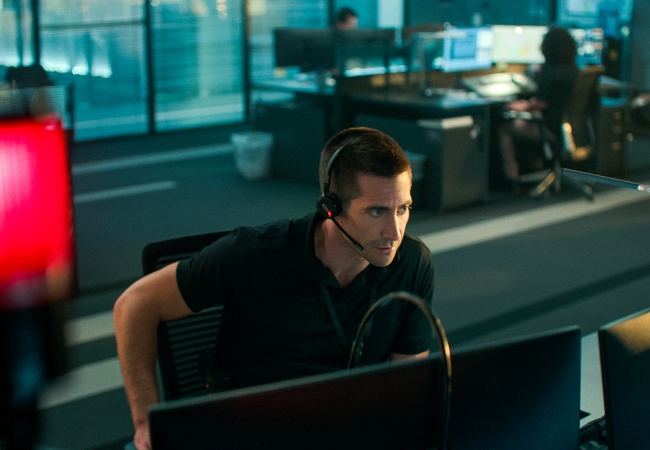 Jake Gyllenhaal stars as a 911 call operator named Joe Baylor in The Guilty, a new thriller movie from Netflix packed with twists, turns, and suspense. Though the film is stacked with big-name actors, we never see the faces of the majority of the cast. Instead, we get to know them by their voices as they speak on the phone with Joe.

As Gyllenhaal explained in an interview with Jimmy Fallon last week, a lot of that has to do with the fact that The Guilty was made mid-pandemic. The whole film was shot in just 11 days, and Antoine Fuqua actually directed the movie from a van parked on the street outside of the soundstage because he’d been exposed to COVID-19 shortly before filming started. Gyllenhaal also added that some of the actors filmed their scenes over the phone in real-time from different countries.

So who played all the characters whose faces we never see?

Netflix’s official Twitter account showcased the core cast in a thread on Monday, noting that the role of Emily Lighton, the young mother who calls 911 and tells Joe she’s been kidnapped, was played by American Honey and The Devil All the Time actress Riley Keough.

Peter Sarsgaard, the actor known for films including Garden State, Shattered Glass, and Jarhead, voices Henrey Fisher, the man who is driving the car with Emily inside, and who she accuses of kidnapping her.

As Joe desperately tries to track down Henry’s car in order to save Emily, he makes multiple calls of an increasingly emotional nature to a California Highway Patrol dispatcher. She’s voiced by Da’Vine Joy Randolph, known for Eddie Murphy’s Dolemite Is My Name and Hulu’s murder mystery series Only Murders in the Building.

Little Miss Sunshine and Escape at Dannemora star Paul Dano voices Matthew Fontenot, the man who calls 911 complaining of being robbed in his car. Another caller named Dru Nashe who says he’s frightened and disoriented is voiced by The Good Lord Bird and Destroyer actor Beau Knapp. Stand-up comedian and actor Bill Burr voices a man who calls 911 outside of a nightclub.

Ethan Hawke, the actor known for The Good Lord Bird and Boyhood among many other films, voices Sgt. Bill Miller, who worked with Joe before he became a 911 operator.

Joe’s ex-wife Jess Baylor, who gets woken up at 2 a.m. by Joe’s attempt to say goodnight to their daughter, is voiced by 90210 actress Gillian Zinser. Better Things and Modern Family actor Dillon Lane voices a 911 caller who gets hurt in a motorcycle accident.

David Castañeda from The Umbrella Academy and Standing Up, Falling Down voices Tim Gerachi, a police officer who does a welfare check on Abby and her little brother, Oliver.

Eli Goree from The CW’s Riverdale and The 100 voices Joe’s former partner from when he was a police officer. Then there’s the fictional Los Angeles Times reporter, Katherine Harbor, who calls Joe repeatedly trying to get a quote from him for a story — she’s played by Knives Out and The Righteous Gemstones actress Edi Patterson.

Of course, there are a handful of other actors besides Jake Gyllenhaal whose faces we do see on screen. Christina Vidal (United We Fall, Sneaky Pete) plays Sgt. Denise Wade, who keeps a watchful eye on Joe and often reminds him to use an inside voice during his frequent, angry outbursts. Adrian Martinez (The Secret Life of Walter Mitty, Stumptown) plays Manny, a fellow 911 operator who sits at the desk next to Joe.

Joe spends the film trying to help Emily Lighton, a young mother who says she’s been kidnapped. She is played by Riley Keough. pic.twitter.com/3SO7Af4DTX

Henry Fischer is the man behind the wheel of the car that Emily is trapped in. He is played by Peter Sarsgaard. pic.twitter.com/FRcJ0z3TOj

Throughout Emily’s ordeal, Joe works — and spars — with a CHP dispatcher. She is played by Da'Vine Joy Randolph. pic.twitter.com/RhFkePne5v

The Guilty is now streaming on Netflix. Main Image: Jake Gyllenhaal as Joe Baylor in The Guilty, courtesy of Netflix.

Heartland International Film Festival Celebrates 30th Anniversary With a Lineup for the Ages
In Honor of 10 Years of AHS, Here Are 10 Things You Probably Didn’t Know About the Real-Life ‘Murder House’