In Honor of 10 Years of AHS, Here Are 10 Things You Probably Didn’t Know About the Real-Life ‘Murder House’ 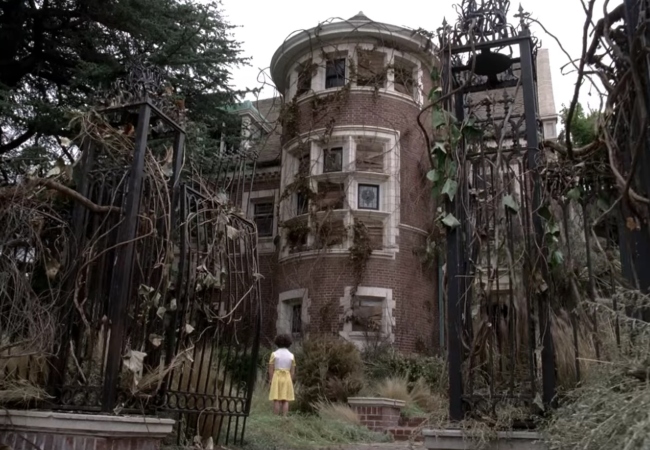 Oct. 5 marks the 10 year anniversary of the 2011 premiere of American Horror Story: Murder House — the very first season of the wildly popular Ryan Murphy FX series. And if you’ve seen Murder House, then you’ll likely recognize the Los Angeles landmark that’s so closely associated with the show that it continues to attract tons of tourists every year. It’s called the Rosenheim Mansion, and in honor of one decade of the beloved Ryan Murphy series, here are 10 things you didn’t know about the real-life “Murder House.”

The Rosenheim mansion, located at 1120 Westchester Place in Los Angeles, gets its name from the architect who built it in 1908. His name is Alfred F. Rosenheim, and the St. Louis, Missouri native was considered a notable architect of his time, having built many other Los Angeles landmarks including the Hellman Building in Downtown, the Hamburgers/May Company Department Store, The North Broadway Bridge, the Cameo Theater, and the Eugene W. Britt House.

The house is a Los Angeles historic landmark

The house was made Los Angeles’ Historic and Cultural Monument #660 in 1999, earning this distinction because of its Tudor-Revival-style architecture and because it’s a “notable work of a master builder, designer, or architect,” according to Historic Places LA.

It has some unique features

In addition to boasting six bedrooms and six bathrooms, the house is also home to a recording studio and a cathedral ballroom which was once a chapel, according to Newsweek. But you won’t see the chapel in American Horror Story: Murder House  — the outlet also notes that the chapel add-on was digitally removed from exterior shots of the house in the show.

The house has changed hands many times

The chapel was added on during the time when the home was owned by nuns and used as a convent, according to the real estate blog Captivating Houses. The blog adds that the Rosenheim family were the home’s first residents. After them, it was occupied by a wealthy mining magnate named A.J. McQuatters, and that after him, it then became a convent until the nuns sold the house for $3 million in 1994 after it was damaged in an earthquake. If you want a better look at the house, Captivating Houses also has a great gallery of photos.

Not all episodes of Murder House were filmed there

According to Newsweek, the pilot of American Horror Story: Murder House was shot on location at the home, but the rest of the first season was shot on a replica set.

Also Read: Here Are the Actors Who Lent Their Voices to Jake Gyllenhaal and Antoine Fuqua’s The Guilty

It’s been on more shows than just AHS

AHS may have earned the house most of its fame, but it’s far from the only Hollywood production that’s been shot there. It’s also also been featured in Spider-Man, Seabiscuit, The X-Files, The Twilight Zone, Six Feet Under, Dexter, and Buffy the Vampire Slayer, according to Newsweek.

It most recently sold for $3.2 million

According to the Los Angeles culture blog WeLikeLA, the house was purchased by its current owners, Dr. Ernst von Schwarz and Angela Oakenfold, for $3.2 million in 2015.

The current owners sued the brokers who sold it to them

In 2018, the couple sued their real estate brokers for not disclosing just how many tourists routinely stop by to gawk at the house, according to Buzzfeed, which notes that the suit called the house a “macabre tourist attraction for fans of the TV Show,” and that “hundreds of fans would come to the property, trespass, attempt to break in, and created significant nuisance not only for the Seller, but for the neighbors as well.”

Now, the owners use the home’s spook-factor in their favor

The owners have since changed their tune. They decided to stay in the house, and in October 2020, Oakenfold explained why they turned their spooktastic abode into a business, charging fans a fee in order to attend online live streams of seances taking place inside the house in the days leading up to Halloween. They even offered a chance for a few fans to spend the night in the home’s creepy basement. “In the end, I think it was just lemons, lemonade,” Oakenfold told WeLikeLA. “I thought if we could do an event and show them the inside of the house, which is what they want, then maybe there’d be some sort of peace,” she added. “So, people can come in remotely, and then we can donate a portion of the proceeds to charity.”

The house is said to be haunted in real life

American Horror Story viewers will recall that the plot of the first season was all about the ghosts who inhabit the “Murder House”— and torment its human occupants. But is the Rosenheim Mansion actually haunted in real life? Oakenfold thinks it is. She told WeLikeLA that a friend visiting the home reported seeing an apparition of a butler going up and down the stairs, and that the daughter of a previous owner had confirmed seeing a butler spirit as well. Oakenfold said she had also spoken to a former nun who lived in the house when it was a convent, and that the sister said she’d seen the spirit of a fellow nun who had passed away rocking back and forth in a rocking chair. Um… yeah.

So anyway, all that is to say, it might be time to go back and rewatch American Horror Story: Murder House again. Don’t worry — it’s still streaming on Netflix, along with eight out of nine of the subsequent seasons.

Here Are the Actors Who Lent Their Voices to Jake Gyllenhaal and Antoine Fuqua’s The Guilty
Yes, That’s Brett Kavanaugh in Impeachment: American Crime Story