Ted Lasso: Zach Braff Tells Us the Directing Advice He Got From Alexander Payne (Video)

Zach Braff has a lot of experience with single-camera comedies. But before he directed the second episode of Apple TV+’s Ted Lasso, he got some really good advice from Sideways director Alexander Payne.

“Alexander Payne… gave me a note on something and I really, really look up to him,” Braff told MovieMaker‘s Micah Khan in a video interview you can watch above.

“He said ‘tousle its hair’ about a scene. Meaning, yeah, I get what you’re doing, and it’s good — he goes, ‘But what does it mean to you if I tell you to tousle its hair?'” Braff says.

“I always think of that when I’m writing. Okay, this is the clean, well, by-the-book version of this — what is the specificity that you as a filmmaker are bringing to the scene? If it’s a scene in a coffee shop between two old friends and they’re catching up, and one of them reveals something, okay, we’ve seen that nine zillion times. What is the specificity and the uniqueness of your storytelling? It’s only going to come out of your brain,” he adds.

“That’s a way to tell the story without upstaging the scene, because if you get to show me, oh, my thing is I’m going to spin around the camera and then I’m going to cut to a bird’s eye down, well then I’m not paying attention to the fucking scene.”

Braff used Payne’s advice when directing his episode of Ted Lasso, which stars Jason Sudeikis and was created by Brendan Hunt, Joe Kelly, and Bill Lawrence. You can watch our full interview with Zach Braff above.

“I’m sure there’s a handful of shots that I shot for this show that were really cool shots,” he says, but  adds that they didn’t all end up making it into the show.

“Jason and Bill probably saved me from myself, because they went, ‘Yeah, that’s a really fucking cool shot, but that’s upstaging the moment a bit.’ And I think you’ve got to be careful about that as a filmmaker,” Braff says. “Depending on what kind of story you’re telling, does the cool shot make the story better, or does it upstage it?” 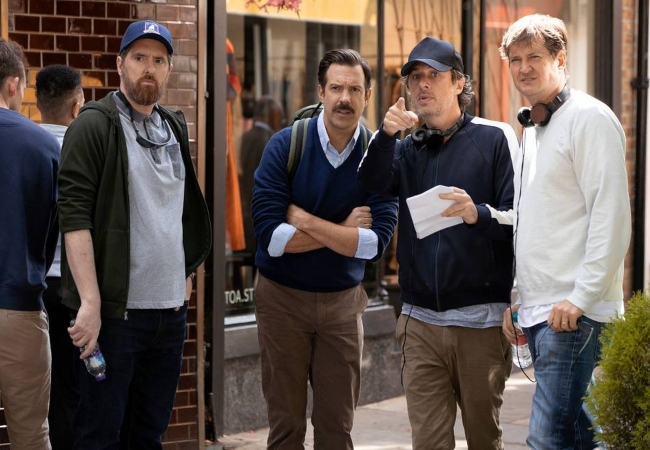 Braff also got some timeless advice from his late father, Harold Irwin Braff, who was a trial attorney by trade but always loved to take part in community theater.

“There’s so many phrases that he would say that stick with me all the time, and one of them was, ‘Never be afraid to pick up a broom.’ Meaning, when I was starting out being a PA, don’t be the guy who’s doing the minimal amount of work. Be the guy who picks up the broom when no one asked him to, and is showing… you’re going to be the hardest worker,” he said.

His father also encouraged him not to be afraid to ask questions, which gave him the courage to reach out to Payne for advice.

“I mentioned Alexander Payne — I’m a big fan of his. I thought of my father. Like, let me reach out to Alexander Payne and see if he’ll read my scripts and give me thoughts. Of course, he said yes, which was awesome — but it’s still happening to this day, me thinking of my dad,” he said. “I think of him all the time, and thinking about not being fearful of putting yourself out there, and not being afraid to get a no from someone because you’ll get lots of no’s, but often, you’ll get a yes.”

This story was previously published on Aug. 13 and has been updated.