Wine Country Rendezvous: The Making of You Can’t Say No, Starring Peter Fonda and Friends 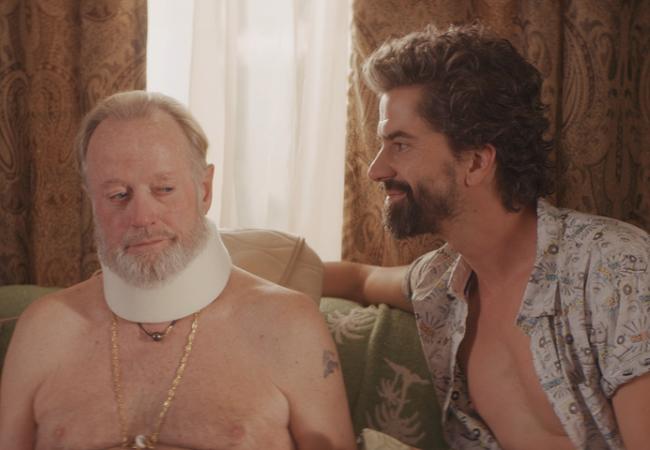 Roman philosopher Seneca famously said that luck is what occurs when the crossroads of preparation and opportunity meet.

By that standard one would think that the majority of independent filmmakers would be “lucky.” After all, we’re notoriously hard workers, and when we do indeed reach that hallowed ground called principal photography, then the gods have obviously granted us opportunity. And yet, for decades the pages of MovieMaker have been filled with interviews of indie directors and producers who tell interesting but almost exclusively bloody production “war stories.” The trenches are filled with accounts of lost financing, DPs who quit for more lucrative jobs at the last moment, bricks thrown through the wrong car windows that almost kill actresses (yes, I saw that happen) and the like.

This is not one of those articles. Lady luck smiled on Paul Kramer and Hus Miller’s You Can’t Say No virtually from the moment Hus finished the script. The story follows a couple, Hank and Alex Murphy, who are on the verge of divorce who decide to play a “game” designed to either bring them closer through better communication and trust—or to provide a more graceful, humane break than most couples in their situation allow themselves. The rules of the game are simple—no matter what one of them asks the other to do, the other must not refuse.

While YCSN is a romantic comedy, its origins were serious and close to the heart for screenwriter, producer and star Miller, who had himself gone through a rough patch personally just prior to writing the script. As in the movies, Miller’s personal story had a happy ending, but it was the writing that provided a real catharsis.

“The concept came about because I’d been thinking of how to re-energize my own relationship,” he says. “As soon as I came up with the idea, I knew I had to write it. It was something I needed to get out.” Miller stresses that while the story is not an exact account of his own 14-year marriage, he was writing about things that were very personal for him and his wife.

Marguerite Moreau and Hus Miller play Alex and Hank Murphy in You Can’t Say No. Photograph by Ian Fisher

“And was she good with that?” I asked.

“To an extent. But when I started sharing it with her she’d say, ‘Well, it didn’t happen like that,’ and I’d say, ‘Yeah, because it’s a story.’”

Some of the comedic situations did indeed happen to Miller and his wife, some happened to friends of his who were going through similar periods in their marriages. When he thought about it becoming a movie and he was able to nail down the very specific location where it takes place (a 46-acre Sonoma area winery whose owner became an executive producer on the film) it all came together very quickly.

“I was about two months into the writing when I knew it was going to be a movie.” Talk about motivation.

Miller says he didn’t initially have himself in mind to play the lead, even though he’s been acting since he was four years old.

“It definitely didn’t start out as a vehicle for me. But later I I realized that this is my life, I put so much of myself into it, nobody else is going to play this role.”

Though eventually he wants to direct, too, he had no desire to do it this time around. Writing, acting, and producing were plenty. So he enlisted his longtime colleague Paul Kramer to helm. Hus previously made nine shorts with Kramer, an American Zoetrope alum who worked alongside Francis Ford Coppola. This is the first feature for both of them, and though they envisioned it as a tiny film, the scope continued to grow from its initial budget of $500K to almost $1.2m. The shoot took 18 days, with five days of pickups.

Marguerite Moreau, who plays Alex Murphy, is still amazed that a first-time producer like Miller could keep it together while playing a character that’s so close to himself. “It’s super hard to play a character that’s so close to the bone. You can talk yourself into circles sometimes and get confused… Like, ‘Am I doing enough?’ It’s not even like, ‘This happened to me and maybe I’m doing something psychologically damaging to myself, it’s more like literally talking yourself out of any connection to it, because it’s too close.’”

“There were definitely moments when it was very weird,” Miller says. “I needed to separate the character from my life and remind myself that this is not me. Which was sometimes difficult.”

Moreau said there were unique aspects of the story which helped. “This movie has a sense of humor and play about it which you don’t necessarily think about when you’re in a such a vulnerable place in your relationship. I think that’s what attracted me to the script. This couple has a sense of humor about the mistakes they’ve made that could end their relationship and they decide to close it out on a high note with this crazy weekend. I thought there were a lot of comedic and dramatic touching possibilities within that to explore.”

“It’s also about forgiveness,” Moreau continued. “If someone steps out of the relationship, it’s unfair. How are you ever going to gain trust back? Is it even possible to get it back?”

Miller knows how lucky he was to have the trust of his financier, who was so supportive of the process.

“I knew he wanted to make a movie and once I told him about the idea he thought it was great. I said I’m also writing this thing with your property in mind and right away he was like, ‘OK, let’s do it.’ The script was by no means in any kind of shooting shape, though… It was a year before we went into production from the time I started writing the script.”

Also “unheard of” is the fact that the casting came about so quickly and seamlessly. Besides, Moreau, who was the model for Alex from the start, Peter Fonda came aboard immediately. “We made an offer knowing it was not very likely to happen, but two days later we found out he would do it.”

Did Moreau, a veteran actor with more than two decades of experience, have any trepidation about working with the neophyte team of Kramer and Miller?

“Sure,” she says. “I wanted to meet him because you can really get a sense of a person… But I loved the script. You really wanted to know what was going to happen to these people. I was excited, but I wanted to meet him face to face. I had just had a baby and I’d be bringing him and I needed to know are these people gonna be cra-cra… because I might not have the bandwidth. But I could immediately tell these were solid folks. And it turned out to be a magical month. We forgot we had real lives to go back to… we were all depressed when we had to go home.”

The sexually ambiguous character of Miles, who provided a lot of comic relief as well as tension (the “gel,” Miller says) was perfectly played by Hamish Linklater.

“I had never understood the whole part of the Miles character that was threatening to the Hank character until I saw Hamish in the role. All the sudden it just blew me away and took the whole story to the next level,” says Moreau.

For director Kramer and his young crew, capturing the story was a challenge. “We only had 18 days of principal photography, which forced me to eliminate shots I initially intended to capture. The ‘one-r’ was quite possibly my Assistant Director’s favorite term, as a one-er only requires one lighting setup and one camera setup for an entire scene.  Shooting a scene in a single shot allows you to steer away from a standard ‘master-medium-close-up’ shot structure.  What ends up happening is those scenes and moments become even more special. So, while I wish we had more time, not having enough of it did have its benefits.”

Kramer said that for the whole cast and crew, one of the highlights was working with Peter Fonda.

“Peter has lived a long, interesting life full of stories he’s always eager to share,” Kramer says. “In the same breath, he’ll tell you about hanging out with Pablo Picasso, Salvador Dali and Hunter S. Thompson. ‘Goddamn Warren Beatty!’ That’s what Peter yelled out every time a plane flew overhead and ruined our audio, as though Mr. Beatty himself was in the cockpit. Peter always kept the crew entertained up until I called ‘action,’ and feels it’s a crucial part of the process.

“Peter’s favorite place to be is on set. He told me he didn’t much care for days off, and just wanted to be with us on set. When Peter wrapped, he did not want it to end. It was emotional for him, as well as for me and a lot of other people.”

Kramer likes to say that this film “isn’t just a love story. I like to call it a “rediscovering love” story. I think the best thing that could happen after couples see our film, is they put more adventure into their relationships. That they find ways to keep things fresh and fall in love with each other all over again.” MM

You Can’t Say No will have its festival premiere in the spring. This film was cast by Julia Kim.