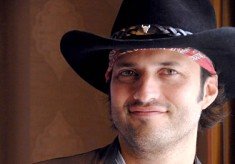 https://www.moviemaker.com/wisdom-wednesday-robert-rodriguezs-things-ive-learned/"> by Robert Rodriguez
&BODY=I found this article interesting and thought of sharing it with you. Check it out: https://www.moviemaker.com/wisdom-wednesday-robert-rodriguezs-things-ive-learned/">

Already in the moviemaking industry for more than two decades, Robert Rodriguez knows the business and he knows it well.

His 1996 memoir-come-how-to, Rebel Without a Crew: Or How a 23-Year-Old Filmmaker With $7,000 Became a Hollywood Player, is a bona-fide classic of independent moviemaking: a step-by-step explanation of how he made his first feature El Mariachi for pittance and eventually sold it to Columbia for many times its budget. Sure, things have changed a little since 1992, but the book is still an inventive (and heartwarming) tale of a little indie-that-could. A modern-day cowboy, Rodriguez has gained notoriety for his flare for Texan and Mexican backdrops. Hits like Desperado, Once Upon a Time in Mexico, Sin City and Machete are rife with his loyalty to his Southern roots and his taste for in-your-face violence and vengeful protagonists. And Rodriguez’s unique filmmaking style— abrupt cuts, fast-paced camera movements and intense zooms—are as signature to him as his hyper-vivid landscapes.

2. You can get a much better perspective on the business by being outside of it. George Lucas told me the same thing. He said, “Just because you live outside of Hollywood, you’re going to come up with ideas and techniques they’ll never think of in Hollywood.”

3. I tell people making DV movies at home, use it for practice. Don’t even try to get it distributed unless it’s fucking fantastic. If not, just keep cranking them out. Get better; get better at storytelling. It allows you to do what I did when I started out, which is make a ton of movies for nothing. And you get so much better at it after a while, you can write them and direct them and you know the structure. You just need to learn how to do it and you learn by doing.

4. Film is horrible, so most definitely HD changes shooting style because it’s not horrible. Then you stop shooting film and you go, ‘Well, why aren’t they doing things this way?’

5. I’m all about freedom in art. [the guilds] want to control it. I’m from Texas, so when someone tells you which way to ride your horse, you think ‘I’ll just go to a different ranch. You guys are riding it backwards anyway.’