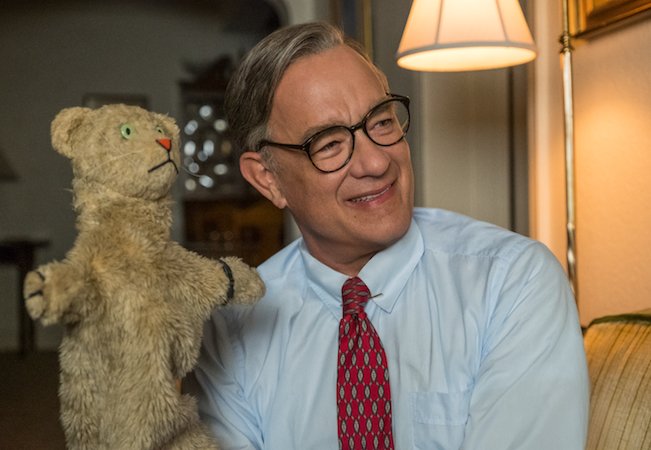 Mr. Rogers couldn’t be the lead character in a A Beautiful Day in The Neighborhood, in which Tom Hanks stars as the Mister’ Rogers Neighborhood host, for a simple reason, according to the film’s screenwriters: Fred Rogers was just too good.

“We quickly concluded that Fred Rogers wasn’t a good protagonist for a biopic by any reasonable definition, because he was unwaveringly awesome for 73 years and then died,” said Micah Fitzerman-Blue-Blue, who co-wrote the script with Noah Harpster. “There seemed to be no peaks and valleys in his story. He really did live an amazing life, almost intentionally. We knew that if we were going to write about him, we would have to find another way into the story and write a character with an arc.”

So they turned to Tom Junod’s beautiful 1998 Esquire magazine profile of Rogers. Then Harpster and Fitzerman-Blue created a new character, Lloyd Vogel, who is played by Matthew Rhys and is similar to Junod, but not identical.

Also Read: Why Fred Rogers Always Weighed 143 Pounds In the film, Vogel reluctantly agrees to profile the Mister Rogers’ Neighborhood host—who in turn tries to help Vogel work through his cynicism and anger. You can read Harpster and Fitzerman-Blue’s discussion of how they crafted the Beautiful Day in the Neighborhood screenplay here. Harpster and Fitzerman-Blue also sat down with the MovieMaker Interviews podcast, which you can listen on your favorite podcasting platform (see links below) or right here:

The latest MovieMaker Interviews podcast includes not only our interview with Harpster, Fitzerman-Blue and Junod, but also Daniel Kaluuya, star of the new Queen & Slim. You can find it on:

16:05: Interview with “A Beautiful Day in the Neighborhood” screenwriters Noah Harpster and Micah Fitzerman-Blue, and Tom Junod, whose Esquire article “Can You Say… Hero?” helped inspire the film. 17:15: Let’s talk about anger.

Clint Eastwood Gets Standing Ovation at Richard Jewell Premiere
Mickey and the Bear’s Camila Morrone, James Badge Dale and Annabelle Attanasio on the Power of Persistence