Why I Love Star Wars, by Rise of Skywalker’s Victoria Mahoney 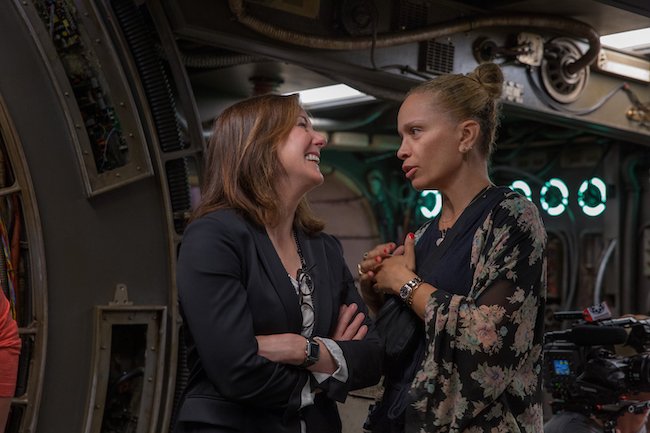 Victoria Mahoney, the second unit director of Star Wars: The Rise of Skywalker, is, remarkably, the first female director in the 42-year history of the saga. Mahoney, pictured above with Lucasfilm president Kathleen Kennedy, spoke to us about discovering Star Wars while growing up in New York City. This is what she had to say:

Star Wars was a way for me to dream as big and full and strong as I wanted to. It was limitless. It told me the world was limitless. The galaxy was limitless. I was around 12 when I first saw it, and I needed that message right at 12. It was a conduit toward dreaming, a portal, a doorway, an entrance into some part of my brain and my heart that had, up until the moment, gone untapped.

Also Read: How Does Baby Yoda Already Have Jedi Powers?

I wouldn’t have been able to break down light vs. dark and Joseph Campbell or the undercurrents of mythology with you when I was 12. But I knew there was something about deciding to be good or deciding to be bad. I was very tuned in, based on events that were happening in the world, in my life around me, in school, my family, and my neighborhood. I knew there was an invitation to be as good as I wanted to be or as bad as I wanted to be. This was going to be my challenge. It’s everybody’s challenge. And I thought George Lucas was speaking just to me, but everyone thinks they’re the one person Star Wars was made for!

I grew up in New York, and it was a fun time to see movies. New York was a place full of vibrancy, and commentary and bigness. You’d go see a movie in New York and people would yell at the screen. I’m going to a particular theater Thursday night, with everyday movie lovers, and I’m going to sneak in and listen to the entire movie with them because I ache and long to hear passionate audiences talking to the screen, the oohing and the ahhing, all of it.

The character that I most identified with was Han Solo. Without a doubt. There was no separation. None. You couldn’t tell me I wasn’t Han Solo. I adopted his walk, I tried to do his smile. I just thought he was the cat’s meow.

My favorite film in the Star Wars universe is Star Wars: A New Hope. This past weekend I spent time with young film students and enthusiasts at the Ghetto Film School, and they all shared their favorite one. It’s so beautiful because they’re teenagers, and it’s interesting to learn which film impacted them the most, as it depended on when they could go to the movie theater and which particular film was playing on the big screen during that timeframe. It wasn’t just about watching it online.

But New Hope was it for me. I’m so grateful it was playing in theaters when I was a kid, and I wasn’t seeing it in hindsight after watching other ones. I’m so happy that I saw it when everyone was cracked open with wonderment—and all of that beautiful madness, how it just took over. How at Halloween, everyone would dress up as the characters. It was everywhere. And the jargon. My friends at school and I would imitate the different words and phrases that were said, and sneak them into any sentence we could, all throughout our day.

In truth, we still do.—Victoria Mahoney

Star Wars: The Rise of Skywalker is in theaters now.

Queen and Slim: A Friendly Debate (Podcast)
Star Wars Is More Than a Hero’s Journey—Harness the Power of ‘The Force’ in Your Next Screenplay