Who Was Jimmy Hoffa?: Things To Know Before You See The Irishman 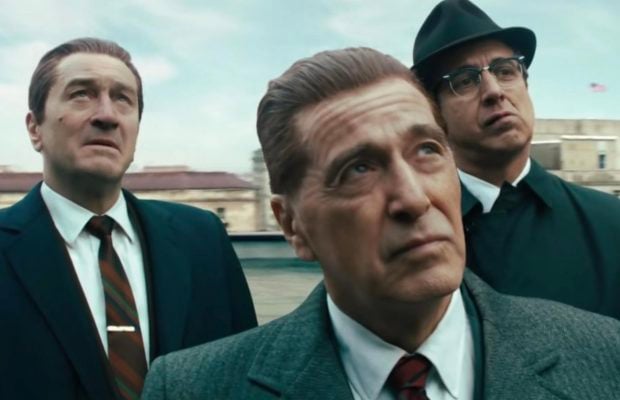 Who was Jimmy Hoffa, the key figure in The Irishman? We get it: You’ve avoided the film this long because you’ve never heard of Jimmy Hoffa and aren’t sure why someone made a movie about him. But now you want to see it because you want to watch as many Oscar-nominated films as possible. So let us explain who Jimmy Hoffa was, but also why you don’t really need to know before you see The Irishman.

The Irishman, nominated for 10 Oscar nominations, including Best Picture, sets out to solve the mystery of who killed Hoffa (Al Pacino) while examining his close relationship with mobster Frank “The Irishman” Sheeran (Robert De Niro).

As Sheeran notes in the film, not everyone remembers Hoffa today. I only knew of Hoffa because, growing up in the ’80s, he came up a lot as a punchline in Mad Magazine reprints—a punchline I needed my dad to explain. In 1992, Jack Nicholson starred in a biopic, Hoffa, directed by and co-starring Danny De Vito. And Hoffa is the focus of Sheeran’s book I Heard You Paint Houses, the source material for The Irishman.

So if you got here by Googling “Who was Jimmy Hoffa,” here’s the short answer. He was a labor leader who was mixed up with the mob and disappeared in 1975. His disappearance has never been solved—except, perhaps, by I Heard You Paint Houses and The Irishman.

Here’s the longer answer. In the early 1980s, about one in five American workers was in a union. Today it’s one in 10. Unions use collective bargaining—in which all workers negotiate as a group for wages and benefits, instead of individually—in hopes of extracting the best possible terms from management. If they don’t get what they want from the management, they can respond as a group, for example, by going on strike.

Unions gained tremendous power after World War II, thanks in large part to leaders like Hoffa, who became president of one powerful union, the International Brotherhood of Teamsters, in 1957.

“Back then, there was no one in this country who didn’t know who Jimmy Hoffa was,” Sheeran’s De Niro says in the trailer for The Irishman.

In I Heard You Paint Houses, Sheeran elaborated:

As unions have faded in influence, so have their leaders. But here’s some more background from I Heard You Paint Houses: In the two years after World War II, when Hoffa was just starting to take control of the Teamsters union, there were 8,000 labor strikes in 48 states. That’s more than 160 separate strikes per year per state. Strikes were a very public way for unions to flex their muscle.

As The Irishman notes, the ability to call strikes gave unions tremendous power, power that most workers can’t imagine today.

But at the Teamsters’ peak, workers had other options. The union could have told unionized drivers to halt deliveries of food, medicine and other essentials, costing the management millions and forcing them to the negotiating table. A man who could cajole, persuade and threaten could be a great union negotiator. Pacino, with his gifts for playing characters who love to both charm people and scream at them, couldn’t be better cast as Hoffa.

One of the best things Hoffa did for his union members was get management to agree to pay into a pension fund. For pretty much anyone under 40, let me explain: a pension fund is a fund, usually financed by employers, that ensures regular payments to retired employees. If you have one, you should probably thank your union. (Full disclosure: I was part of a union as an Associated Press employee from 1997 to 2008, and am probably still eligible for a small pension payment when I someday retire, if the world still exists.)

That led to some problems. But you’ll see that in The Irishman, now streaming on Netflix.

Ava DuVernay v. Stephen King: How Much Should Diversity Matter in Oscars Voting? (Podcast)
Spirit Awards Nominees Tell Us What They Learned While Making Their Films