Who Is Frank Sheeran Talking to in The Irishman? 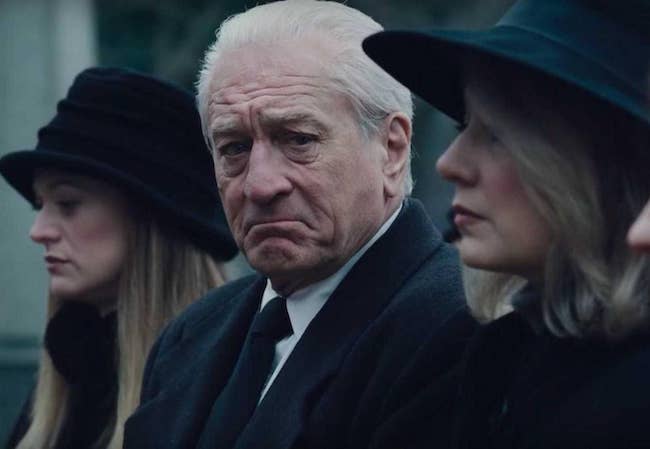 The Irishman is framed by Robert De Niro’s character, Frank Sheeran, talking directly to the camera, confessing a life’s worth of sins. But who is Frank Sheeran talking to in The Irishman? It’s debatable, but we think he’s talking to Charles Brandt, whose book I Heard You Paint Houses, provides the basis for the film.

The Irishman is getting lots of renewed attention lately because of its 10 Academy Award nominations—including for Best Picture—and a lot of people finally watching it because of those nominations. Everyone wants to have seen as many of the nominees as possible.

The question of who Sheeran is addressing—both in voiceovers and talks directly to the camera, and us—has intrigued many admirers of the film, especially on their second or third viewing on Netflix. (There’s so much to process about the film that the question of who Frank Sheeran is talking to might not be your first question.)

The Irishman shows us that many people—including FBI agents—pleaded with Sheeran, near the end of his life, to tell them what he knew about the death of Jimmy Hoffa. That did indeed happen, as recounted in I Heard You Paint Houses.

Also read: Is The Irishman a True Story? Does It Matter?

But what the movie omits is that Sheeran ultimately did talk to someone—Brandt—which is why I Heard You Paint Houses and its film adaptation, The Irishman, exist.

Brandt has said that six weeks before Sheeran died in 2003, at the age of 83, he held up a copy of I Heard You Paint Houses and stood by everything that appears in the book, including his account of what happened to Hoffa (played by Al Pacino in The Irishman.)

If you believe the interpretation that Sheeran is spilling his guts to Brandt, then the point of view that is watching Old Frank Sheeran confess in the retirement home belongs to Brandt: We are seeing and hearing the story from his perspective, as he listens to long stretches of Sheeran’s stories without interrupting.

There are other theories, of course. One is that Sheeran is speaking to the priest (Jonathan Morris) who attempts to take his confession near the end of the film. I don’t think so, because the priest appears briefly in the long tracking shot through the nursing home that provides the opening of The Irishman. The tracking shot implies that the person whose POV we’re seeing is a visitor to the nursing home, and one who knows the way to Sheeran.

If the POV that first leads us to Sheeran is the same as the one from which we see Sheeran in the nursing home for the rest of the film, it of course wouldn’t make sense for the priest to see himself, off to the side. Martin Scorsese has a better grasp of the language of cinema than, well, anyone, and it seems unlikely he would do something so confusing. (Of course, there are other scenes at the nursing home—notably his intimate talks with the priest—in which Sheeran does not seem to be aware of “us,” or Brandt, or the point-of-view of the camera.)

Also Read: 5 I Heard You Paint Houses Stories That the Movie Leaves Out

Of course it’s possible that Scorsese doesn’t want us to worry about who Sheeran is talking to, other than us. Perhaps Sheeran, like the leads of the past Scorsese gangster films Goodfellas and Casino, is simply talking to an unseen person, you. Or me. Or anyone watching and listening.

Or perhaps Sheeran is just talking to himself, thinking out loud. Because the film does acknowledge, in another way, that Brandt may someday enter Sheeran’s life:

It ends with an open door.

I initially saw the open door as Sheeran being desperate for a connection, as well as a call-back to the way that his friend Jimmy Hoffa slept with an open door—a willingness to be open and vulnerable to the world. (Hoffa, the film suggests, was too willing to be vulnerable.)

But like many things in The Irishman, the open door can be taken many ways, and serves several purposes at once.

As we said, the question, like much of the film, is an open door to interpretation. Other theories abound, including some in this Twitter thread started by the always thoughtful author and critic Matt Zoller Seitz.

The Irishman is now streaming on Netflix.

From After Lucia to Young and Wild: Watch Highlights of Some of the Decade’s Best Latin American Cinema
How Is Emperor Palpatine Alive in Star Wars: The Rise of Skywalker?