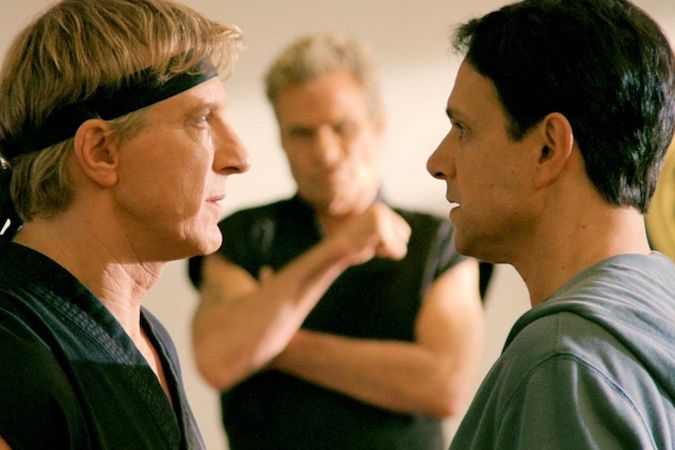 A Sopranos star joins White Lotus; a hilariously dirty song pops up on family-friendly Cobra Kai; a Swedish film festival wants to hypnotize us; the fantastic trailer for the chillingly titled A Banquet. All in today’s Movie News Rundown.

But First: Everyone saw that the Sundance Film Festival has canceled all in-person events, right?

Also: Can you sign up to have the Rundown sent to your inbox? It takes 10 seconds and you will also get invitations to cool events and screenings, in-person and online.

Succession: As you enjoy your Succession withdrawal, check out Margeaux Sippell’s look at the excellent visual effects on the show that doesn’t want you to notice its visual effects.

White Lotus: It’s nice to have things to look forward to, and I’m pretty thrilled that the Sopranos’ Christofuh, Michael Imperioli, is the first actor to sign up for the second season of Mike White’s magnificent The White Lotus. According to Deadline, he will play “Dominic Di Grasso, a man traveling with his elderly father and recent college-graduate son.” The new season will be set at a new White Lotus resort, not the one in Hawaii.

Imperioli: As much as I like The Sopranos, I really became an Imperioli fan listening to his Talking Sopranos podcast with fellow Sopranos vet Steve Schirripa. Their interviews and episode recaps are great, but even better are their long, beautiful riffs on subjects like their favorite restaurants and actors who got their big break later in love. They also talk about behind-the-scenes things many of us have always wondered about, like whether the music playing during club scenes is the same as the music played on-set. I’ve said it already but I’m also really liking their book, Woke Up This Morning, culled from the podcast interviews. There are a lot of Sopranos books, but you aren’t going to do better than the one written by guys who were actually on The Sopranos.

Feast or Famine: Here’s the stunning new trailer for the upcoming IFC Midnight film A Banquet, about a girl who won’t eat. Scottish director Ruth Paxton said when the film premiered at the Toronto International Film Festival that it is about the “ferocity of maternal love, the psychology of food, and power, the importance of one’s sense of purpose, the depiction of female madness, and the question of faith.” I’m in.

Need a Deadline? Are you a writer who needs a deadline as motivation? I am. Here’s a manageable one: The Monte-Carlo Television Festival has issued a call for entries for its Golden Nymph Awards, to be presented during its 61st edition June 17-21. Submissions close March 24. Previous winners include Borgen, The Killing, Modern Family, Breaking Bad, It’s A Sin, Money Heist, The Marvellous Mrs. Maisel, Das Boot, Escape at Dannemora and My Brilliant Friend.

Here’s How Paul Walter Houser Ended Up on Cobra Kai: Per The Hollywood Reporter.

Speaking of Cobra Kai: Am I the only one to notice that Season 4, Episode 3, “Then Learn Fly,” opens with a rocking but shockingly gross song about two brothers having sex with the same lady? “Two Heads Are Better Than One” (possibly a double entendre?) is by Power Tool (possibly a double entendre?), aka blonde twin rockers Matthew and Gunnar Nelson, aka Nelson, who wrote the song with their friend Dweezil Zappa. It was originally on the Bill and Ted’s Excellent Adventure soundtrack, and Nelson’s label told them they couldn’t do it under their own name for contractual reasons — not because it’s about two brothers having sex with the same lady. If y0u don’t think that’s what “Two Heads Are Better Than One” is about, that’s your prerogative, but here are the actual words. I’m not at all mad at my favorite show, Cobra Kai — just amused that such a wholesome series snuck in such a dirty, dirty song. Here you go.

Mass Hypnosis: The Göteborg Film Festival, which last year sent a film fan to an isolated lighthouse, has another bold, headline-friendly idea for this year’s event: mass hypnosis. The festival plans to subject attendees to the daring experiment at screenings for three films: Land of Dreams (Jan. 30), Memoria (Feb. 2) and Speak No Evil (Feb. 6). If you’re planning to fly to Sweden in the next month — that’s a thing we’re all doing, right? — sign up now. If not, enjoy counting the cinematic references in the fun trailer below. (The easy ones are Twin Peaks, The Shining, and Donnie Darko.