Lensing and re-lensing Oregonian terrain through fresh eyes has become something of a cottage industry for cinematographer Christopher Blauvelt.

His cameras have traversed the Oregon trail in Kelly Reichardt’s Meek’s Cutoff, as well as the lush greens and dirt browns of the perennially Northwestern director’s other in-state productions, such as Old Joy, Wendy and Lucy, and Night Moves. Now he’s returned to Portland to capture the city’s 1970s and ‘80s-era essence in native moviemaker Gus Van Sant’s Don’t Worry, He Won’t Get Far on Foot. To style the biopic on the life and times of cartoonist John Callahan, Blauvelt kept his set of tools lean and efficient and his shot scheme relatively pared down, favoring the zoom lenses characteristic of the kind of cinema often churned out during that period. He recently talked to MovieMaker about the go-to gadgets and intimate items he kept with him on-set. —Max Weinstein 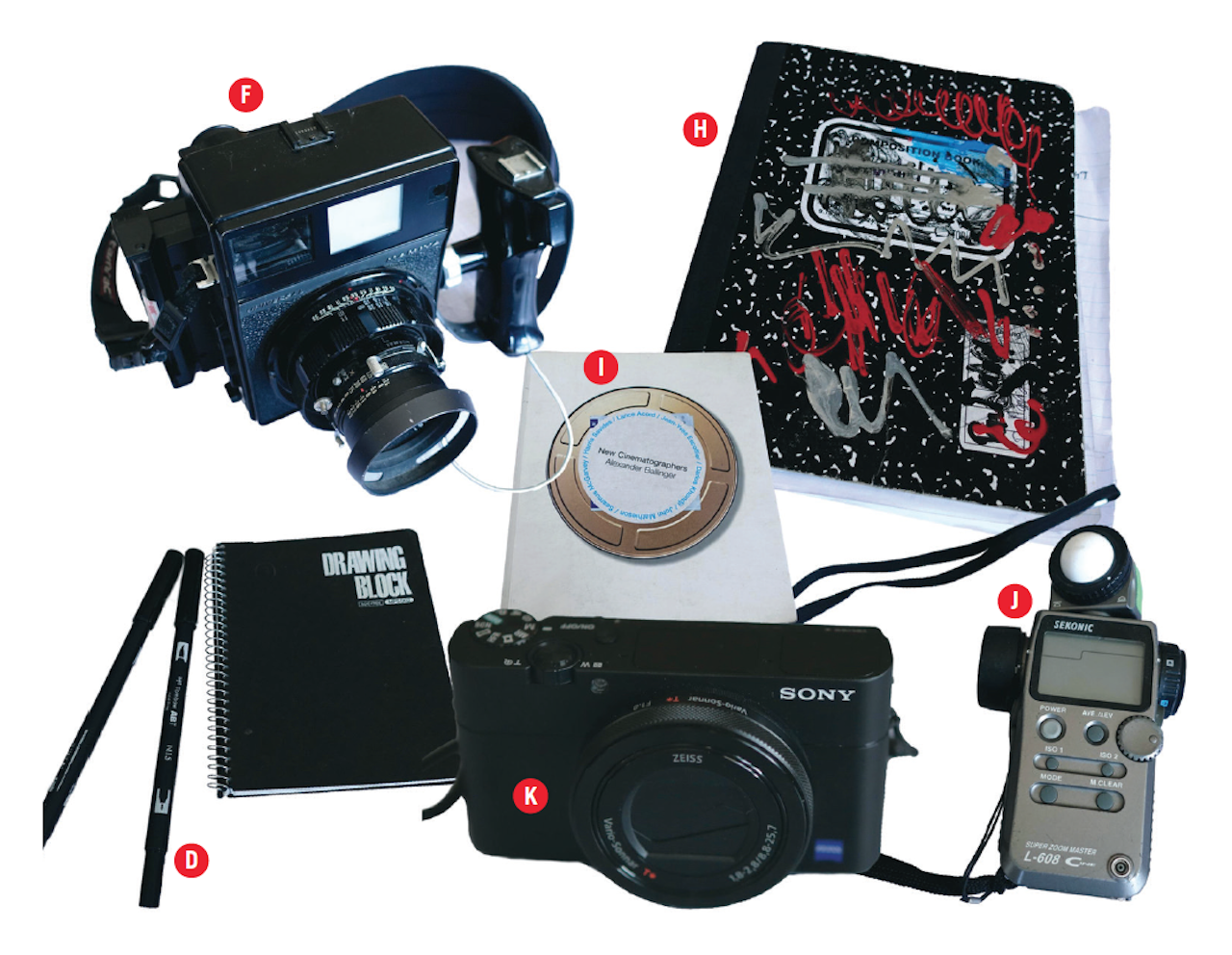 My Canon 5D is what I use mostly for scouting, and occasionally to shoot video sequences.

Ah, so good. I keep this little guy in my pocket.

I still have some of this instant film. It’s a great way to check exposures when shooting on film. .

For when you want to add some style and grace to your ideas..

We do lighting diagrams as much as possible for future reference.

I’ve used many of these cameras, but this particular one is the fastest (T3.5) and closest focus (3’5”). The Mamiya medium format lens has the most beautiful glass.

My favorite light meter. Fits perfectly in your hand and pocket.

I’ve been carrying this book around with me for a long time. It has interviews and conversations with some of my favorite DPs. There’s something about the thoughtful approach and technical savvy that these people convey with their style and work ethic. It’s an amazing guide for anyone interested in moviemaking..

This meter has an incident and sort meter all in one. It’s a bit more sensitive than the Minolta, so I have to pull it out in extreme low light. It’s also both water- and beer-proof.

This is my new toy, and it takes great images. I love it because it’s small and has a ton of resolution. The Zeiss lens makes it stand up to anything around.

I have sensitive eyes.

M. Photo of My Wife

I usually have a Polaroid or two of my wife Jaime. She always makes me smile.

Gear I’d Love to Have:

I’ve just changed the camera that I scout with to a much smaller Sony RX100, and I like it a lot. Ultimately I would love to own an ARRI Director’s Viewfinder and a small zoom to take with me instead of having to keep renting one. It’s really nice to look through an actual movie lens for scouts and when lining up shots on set.

What Item Can’t I Live Without?

The item I use the absolute most is a simple notebook and a pen. It’s of course the best way to write down ideas for any particular scene or shot so that I can expand on later. I am a horrible artist, but some of the crude things I sketch out on paper are what actually become the spirit behind some of the shots we’ve done. Maybe these tools and the method behind them are too minimal, but I just don’t like a lot of stuff. I’d rather have my hands free to explore the sets and chat about what we want to do on when we’re there and write it all down to carry on the discussion during the course of prep.

What Do I Consider an Indulgence?

“Indulgence” isn’t a word used on my films too often. Every tool and resource is so meticulously debated over in prep, so there’s not much that would be considered a luxury. However, I will say that we usually have a few days where we’ve planned to have fancier tools to make a shot or a scene work the way we intended. This might be a steadicam, remote head, technocrane, arm car, or process trailer. But most of the time, my idea of indulgence is when we feel like we’ve scheduled the right amount of time to find things, as opposed to racing against the clock. MM

Stealing the Shot: Ocean’s 8 Cinematographer Eigil Bryld on the Style and Influences of a Scenic Career
Eye Piece: DP Shabier Kirchner Lensed Skate Kitchen on Wheels, But Didn’t Skate Through His Demanding Shoot