What Cinema Is For; Malice at the Palace; Titane Comes to NYC 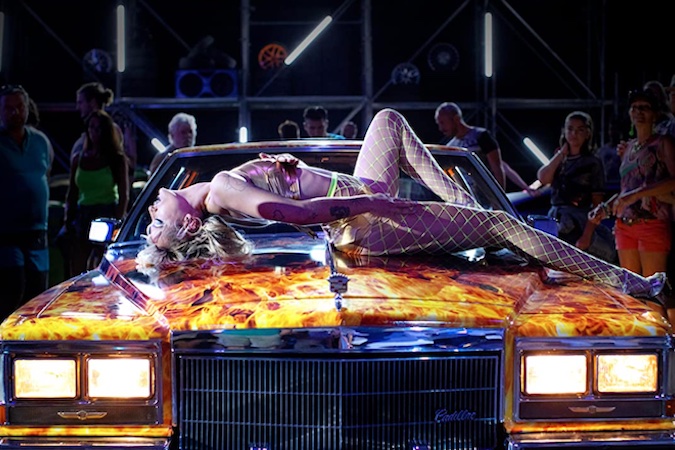 Dissecting the legendary “Malice at the Palace” brawl; the eye-popping Cannes winner Titane steers its way to New York; some thoughts on the merging big- and small-screen experience. Plus: Great festival news from BlackStar and Slamdance. All in today’s Movie News Rundown.

“Malice at the Palace”: Margeaux Sippell tells the story of the cup-thrower who set off a lot of chaos at a 1994 Indiana Pacers-Detroit Pistons game in 1994. The brawl is chronicled in Netflix’s new sports series Untold. My favorite twist in the saga: Cup-thrower John Green and cup target Ron Artest, aka Metta World Peace, aka Metta Sandiford-Artest, became friends.

More White Lotus: The Mike White HBO Max series has already been renewed for a second season, with new characters and a new location. The Hollywood Reporter has details.

Jennifer Hudson as Aretha Franklin: Here’s a snippet of Hudson singing “Think” in character as Aretha Franklin in Respect, out Friday — as well as a few thoughts on her performance. We have an interview with the film’s director, Liesl Tommy, coming very soon.

Don’t Want to Miss a Damn Thing? Sign Up for This Newsletter.

New York Film Festival: The Cannes Palme d’Or winner Titane and the Sundance darling Passing are among the films coming to the 59th New York Film Festival, which will also include the premiere of Joel Coen’s solo directing debut, The Tragedy of Macbeth, starring Denzel Washington and Frances McDormand. Screenings will be held in-person for those with proof of vaccination, and there will be some outdoor and virtual events as well.

Titane Trailer: Here’s the wild trailer for Titane, a body-horror thriller that also involves a car. It’s written and directed by Julia Ducournau, whose previous film was the carnivorous coming-of-age story Raw.

Thoughts on Film: I haven’t seen Titane, but as our big-screen and small-screen experiences blend together, I find myself increasingly drawn to movies that just go for it — movies like Titane. (Also Mandy, Promising Young Woman, The Father, among others.) You don’t need a big screen to go big. What differentiates cinema from TV for me, lately, is boldness, risk-taking, experimentation, and a filmmaker who embraces the idea of telling a story that isn’t for everyone, as opposed to trying to capture the fleeting attention of the widest possible audience skittering through streaming options. We have enough TV scenes in which one character conveys big reveals to another. Cinema is for nightmare colors and outsized performances and puzzling juxtaposition and trouble. You may not have the captive audience of a movie theater (at least for the next few months) but you can captivate us by making movies we can’t emotionally escape.

Letter From Your Far-Off Country: Here is the extremely intriguing trailer for the BlackStar winner.

Maisel Goes West: The Marvelous Mrs. Maisel starRachel Brosnahan has joined the cast of the upcoming Walter Hill Western Dead for a Dollar, starring Christoph Waltz as a bounty hunter who runs into his sworn enemy, played by Willem Dafoe, while searching for Brosnahan’s character, the missing wife of a successful businessman. The film is a big step forward for Quiver Distribution, which helped arrange the film’s financing and packaged the project alongside Canadian-based production company CHAOS a Film Company. “We are thrilled to be working with Rachel and this best-in-class cast,” said Quiver Distribution co-presidents Berry Meyerowitz and Jeff Sackman.

Slamdance in the Desert: After going all virtual in February, the Slamdance Film Festival will hold a new outdoor experience for its 2021 award winners and fan favorites Sept. 24-26 in Joshua Tree, California.  The 12-film line-up will includes Grand Jury winner Taipei Suicide Story by KEFF, Audience Award winner Holy Frit by Justin Monroe, Workhorse Queen by Angela Wasko, End of the Line: The Women of Standing Rock by Shannon Kring, and short works from Slamdance’s inaugural Unstoppable program, created by filmmakers with disabilities. “Our filmmakers this year benefited greatly from Slamdance’s new virtual platform but we continue to believe the future of film involves people sharing the joy of cinema projected larger than life. We hope our new desert showcase comprising a next generation of award winning and diverse filmmakers supports and encourages cinema in the local community and for film fans seeking a new destination experience in southern California,” says Slamdance co-founder and filmmaker Peter Baxter. You can buy single-day and weekend passes at Slamdance.com for $35 or $90.

Comment of the Day: “I enjoyed the article because although I had seen and enjoyed TP as Zorro a long time ago, I had forgotten about the films. I’ll have to get hold of them,” writes Doug Mayfield, in response to this article headlined The Mark of Zorro Unmasked: Analyzing the Irony and Disguises of Tyrone Power’s Swashbuckling 1940s Hero.

Hell Yes: That Dead for a Dollar reference is a shout out to Fievel.