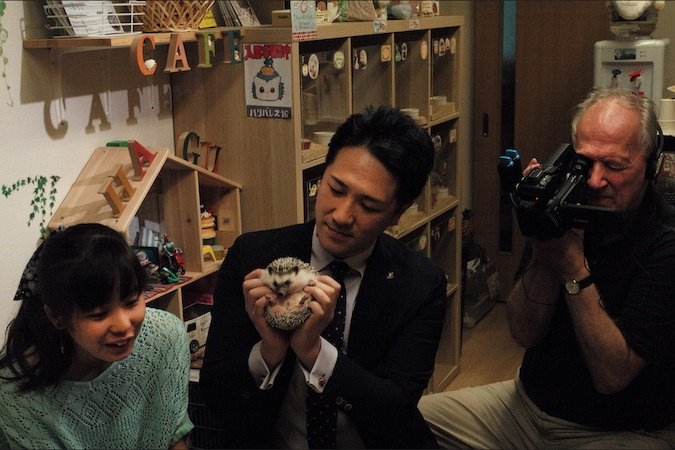 The new Werner Herzog film Family Romance LLC is about a real-life Japanese company that invites customers to rent fathers for weddings, school events, or any occasion. Herzog himself grew up without a father — but that isn’t why he made the film, he says in the latest MovieMaker Interviews podcast.

“No. Because my older brother and I were very glad that we didn’t have a Field Marshall who would command us around and tell us what was right or wrong. We grew up in a very pleasant, wonderful, pre-dawn of anarchy. Meaning there was no ruling set up by a father figure who would tell us what to do.”

Instead, he said, he and his brother constantly tested their mother — and she, in turn, raised them by example. Herzog shares a wonderful anecdote on the podcast about how his mother convicted him and his brother to get rid of a motorcycle that was the source of “minor accidents on a weekly basis” when they were teenagers.

Herzog also shares with us his advice on handling a newborn.

“Talk to her. Sing to her. … Don’t speak in baby speech,” he says, before describing a viral video that he says is “absolutely wonderful” and an illustration of “being a father at his best.”

Family Romance LLC opens with a 12-year-old girl named Mahiro meeting a man who says he’s her father. In fact, he’s real-life entrepreneur Yuichi Ishii, who owns Family Romance LLC and rents himself out as a father, while also managing a stable of actors who fill in as fathers, mothers, husbands, wives, and other loved ones. All attempt to maintain professional boundaries with their clients, while pretending to be the most important people in their lives.

As you can imagine, it’s an extremely awkward dance, but one they attempt to handle with grace and professionalism. There really is a company called Family Romance LLC, and Yuichi Ishii, the man seen in the film playing Yuichi Ishii, really does own it. But the film isn’t a documentary, as Herzog explains.

Later in the podcast, Herzog also clarifies some comments he recently made about dogs to the New York Times, and explains why he thinks the news media is insistent on portraying him as some kind of dark doomsayer.

You may get the feeling that we’re trying to steer you toward the podcast, rather than presenting a straight written interview with Herzog, and I am — because would you rather read my transcript of what Werner Herzog said, or hear him speak in his own voice, one of the most recognized and appreciated voices in the world?