We Summon the Darkness With Director Marc Meyers (Podcast) 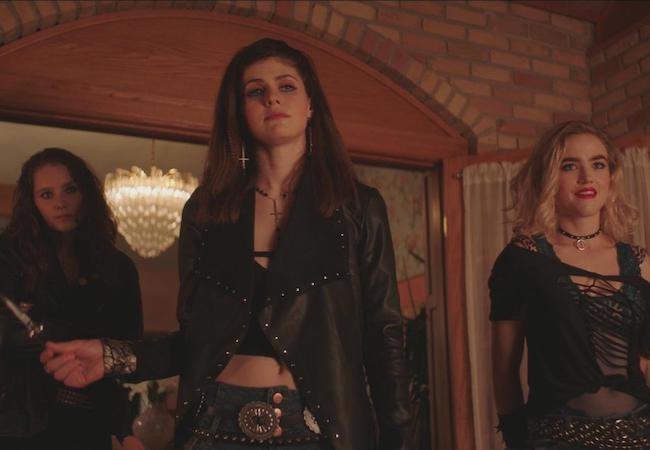 We Summon the Darkness and My Friend Dahmer, two of prolific director Marc Meyers’ latest films, unfurl almost opposite takes on serial killers. Dahmer is a sober, anti-sensationalist exploration of how a confused teen became a reviled cannibal. Darkness turns a Satanic Panic-era killing spree into a headbangers’ ball of dark comedy.

Meyers, as you can probably guess, has a lot of range. He discusses both films, and his other work, in the latest MovieMaker Interviews podcast, which you can listen to on Apple, on Spotify, or here:

We Summon the Darkness opens with three young women (Alexandra Daddario, Maddie Hasson and Amy Forsyth) road-tripping to a metal show in Indiana in the 1980s. The radio mentions a string of  Satanic murders. They meet three boys in the metal show parking lot, and things happen. Johnny Knoxville turns up as the voice of the religious right. We’re keeping things deliberately vague.

We Summon the Darkness is a movie that lures you in quickly with a naturalistic, nostalgic look back on scares that it’s hard to believe used to scare us — then skillfully contemporizes those fears. It won’t keep you awake at night — other things have that covered — but it will distract you and provide some giddy, witty fun.

Meyers delighted in switching from the grim ’70s sadism of young Jeffrey Dahmer to the guiltless ’80s pleasure of Darkness.

“It’s wild, it’s bloody, it’s funny, it’s crazy, it’s fast, it’s subversive,” Meyers said. “I definitely felt like it was the next thing to do in that same filmmaking vein that I had discovered in doing Jeffrey Dahmer’s story. That was my first genre film, and I discovered how fun it is to work in that space.”

He agreed with us that everyone is obsessed with serial killers, whether we admit it or not.

“We all are. We all are fascinated by the underbelly of our psyche. The dark, deepest monstrous thoughts that don’t stay in our brains as normal people, but they might creep through. Or we’re fascinated by the people that went off the rails. It’s just something that’s natural. And it also makes for great entertainment,” he said.

(L-R) Alexandra Daddario as Alexis, Amy Forsyth as Bev, and Maddie Hasson as Val in the horror thriller, We Summon the Darkness, a Saban Films release.” Photo Courtesy of Saban Films.

“I wasn’t, before My Friend Dahmer a ‘murderino’ or serial killer aficionado, but once in a while, like anybody, you get obsessed with the true crime stories that are out there, like Making a Murderer or right now everyone’s obsessed with Tiger King, which I just finished. I think the wild people in this world that go way off the deep end will forever be interesting to all of us.”

He continued: “Because the rest of us dare to be civil and normal. We try to participate in society with other people. Or you have to find a really odd bunch of people that enable you to explore those really dark proclivities.”

Meyers thought a lot about how Dahmer became a killer while adapting My Friend Dahmer, which is based on a graphic novel by Dahmer’s high school classmate John Backderf.

“He was wired wrong,” Meyers said. “He was a sad tragic kid, where the doors that could have opened to help him never did, and the doors that allowed his darkest proclivities to pour out, those doors did open up for him,” said Meyers.

He said he spoke with many of Dahmers’ high school classmates while making My Friend Dahmer, and that some of their children were extras in the film.

“They know that he slipped through the cracks unchecked, by the negligence of adults and there was nowhere for him to turn for help. I feel like society has improved itself and has a better sense of helping somebody who might be so far off the deep end, usually.”

Here are highlight of the interview, with timestamps:

5:20: We talk about the short documentary “Heavy Metal Parking Lot,” one of the influences on We Summon the Darkness.

15:00: Marc Meyers on proving My Friend Dahmer wasn’t just another serial killer movie: “We had to almost make the movie to prove it as a concept.”

23:20: A very subtle spoiler about We Summon the Darkness.

24:45: How things are going with our big, not-by-choice video-on-demand experiment.

28:00: Will COVID-19 recalibrate what we consider dramatic?

Related Topics:feature, My Friend Dahmer, Podcast, We Summon the Darkness