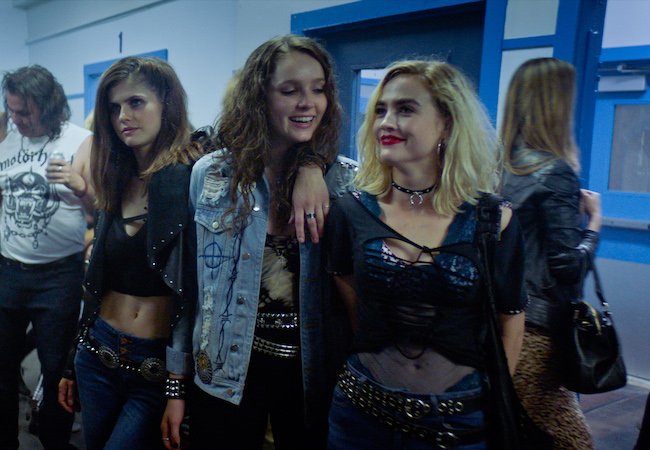 We Summon the Darkness director Marc Meyers has delighted me by confirming that one of the influences for his giddy Satanic-panic horror thriller is the deranged documentary “Heavy Metal Parking Lot.”

Meyers says the 16-minute doc was definitely on screenwriter Alan Trezza’s mind when he wrote We Summon the Darkness, which opens with three young women (played by Alexandra Daddario, Maddie Hasson and Amy Forsyth) road-tripping to a metal show in Indiana in the 1980s. The radio mentions a string of  Satanic murders. They meet three boys in the metal show parking lot, and things happen.

Meyers says We Summon the Darkness is “not only an ode to that documentary,” but also that “Heavy Metal Parking Lot” helped him and his collaborators capture all the details of the ’80s metal scene.

In the early days of Netflix, when movies came in red envelopes, there was a legendarily long wait for “Heavy Metal Parking Lot.” Shot in 1986, in a Maryland heavy metal parking lot just before a Judas Priest concert (with special guest Dokken), it features feather-haired kids in Trans Ams throwing up pitchforks for Priest and saying things that their kids would soon consider “problematic.” (Some of the things they do should have been prosecuted at the time.)

The movie has inspired “where are they now” stories, follow-ups, and a 2016 SXSW retrospective, with good reason: It’s a crazy time capsule of real ’80s kids, saying what they really think.

Judas Priest comes off pretty well: One group of fans says the band gave them backstage passes because one of their friends died.

This website has the full details on the history of the documentary, from producers John Heyn and Jeff Krulik. “It’s a definitive cultural touchstone for the 1980s metal scene: spandex, big hair, denim, mullets, muscle cars, and beer,” the site explains.

Also: Fans of Jordan Peele’s Us, which remagined Hands Across America, will enjoy the contemporaneous mockery of the event by some skeptical teenage Priest fans. It starts at about the 4-minute mark.

Meyers discusses We Summon the Darkness and his other work in the latest MovieMaker Interviews podcast, which you can listen to on Apple, on Spotify, or here:

Here are highlight of the interview, with timestamps:

15:00: Marc Meyers on proving My Friend Dahmer wasn’t just another serial killer movie: “We had to almost make the movie to prove it as a concept.”

23:20: A very subtle spoiler about We Summon the Darkness.

24:45: How things are going with our big, not-by-choice video-on-demand experiment.

28:00: Will COVID-19 recalibrate what we consider dramatic?

We Summon the Darkness With Director Marc Meyers (Podcast)
Carole Baskin: No Plans to Sue Over Tiger King Murder Accusations… Because of COVID-19