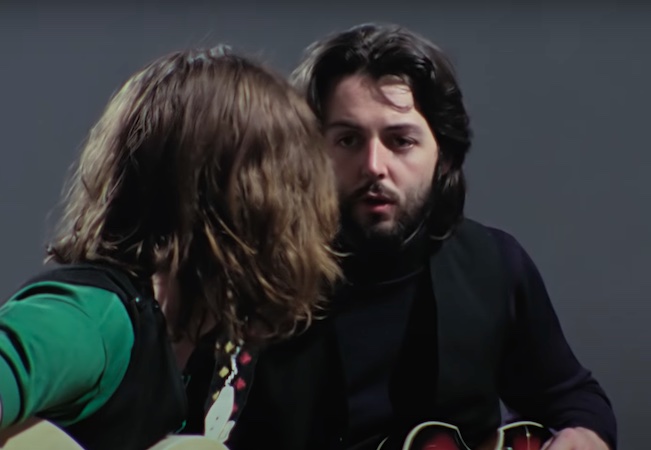 It’s a dark time for the Beatles. They’re scheduled to perform for a live audience in what will soon be a TV special and their next album. John Lennon is nowhere near as creative as usual. Ringo Starr and George Harrison are doing their best, but Paul McCartney is feeling the pressure to produce a hit – so he sits down and hammers out “Get Back,” one of the most beloved songs in the Beatles catalogue, and the one that gives its name to the new Peter Jackson documentary about the frustrating, sometimes sad, and creatively thrilling Let It Be sessions.

The moment McCartney composes “Get Back” has gone viral because of the incredible, spontaneous creativity involved: How often do we see a rock n’ roll classic composed in a matter of minutes, before our eyes? McCartney doesn’t create the whole song on the spot, as George and Ringo look on – John is nowhere to be found — but he does come up with the basic riff and the melody. It’s electric and inspiring. Great things come from just trying, trying, trying.

watching paul just pull get back out of the ether is still blowing my mind lol
pic.twitter.com/m5LWqCEqJR

Some on social media have noted that Paul McCartney owes a massive debt to the blues musicians who came before him and created the tradition he builds on. He would no doubt agree: That’s a criticism one could apply to countless songs, most of them not as unforgettable as “Get Back.”

Jackson’s film, assembled from January 1969 footage captured by Michael Lindsay-Hogg, provides modern audiences the chance to spend hours in the creative trenches with some of the greatest artists in the history of music. Lindsey-Hogg originally recorded the band for a planned TV special that eventually turned into the 1970 film Let It Be. It coincided with the release of the album of the same name, which was at one pointed to have been titled Get Back.

Also Read: What House of Gucci Gets Exactly Right — and Just Made Up

Jackson’s film has several levels of meaning: It gets us back to the plans for Get Back, to the creation of the song “Get Back,” and to the stress of creation, long before rock ‘n’ roll myth-making flattened out the realities of The Beatles’ final days. Jackson’s film should destroy the antiquated notion that Yoko Ono broke up The Beatles. The film show’s that Lennon’s disengagement — heroin didn’t help — put intense pressure on McCartney, who felt that he was forced to be the group’s de facto leader.

But even under pressure, the band is brilliant. A sometimes phoning-it-in John Lennon still sounds more passionate that 99 percent of musicians, and he casually noodles with a tune that will eventually become the gorgeous “Jealous Guy.” George Harrison, energized and eager to please, goes home one night and comes up with “I Me Mine.” Any notion that Ringo was just along for the ride is completely dashed by his professionalism and calming energy — Linda Eastman, the future Linda McCartney, even notes that Ringo is the easiest Beatle to hang out with.

And the genius of Paul McCartney — hard-earned, through years of obsession with the blues — is perhaps never more obvious than when he sits down and knocks out “Get Back.”

Get Back, directed by Peter Jackson, is now streaming on Disney+.

Main image: John Lennon (L) and Paul McCartney in Get Back, directed by Peter Jackson.

House of Gucci Saves Time by Cutting Out Some Guccis
Spencer: Why Princess Diana and Prince Charles Never Say the Word ‘Divorce’