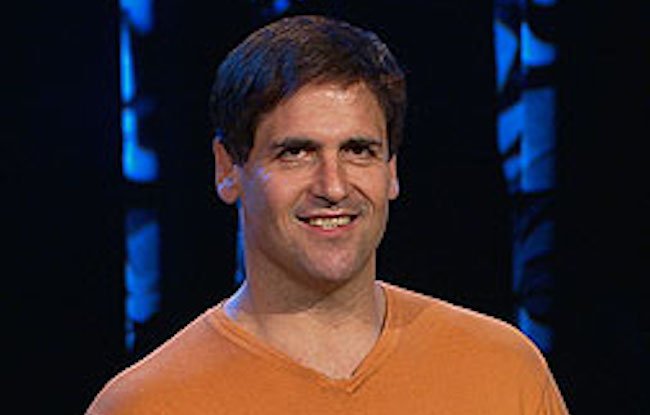 Just in case you just woke up from a long winter’s nap and haven’t yet heard of Mark Cuban, let me introduce you.

He’s the maverick owner of 2929 Entertainment and (eerily) the Dallas Mavericks, along with Landmark Theaters and HDNet Films (producers of digital video features budgeted up to $2 million) and chunks of Warner Bros. and Lionsgate. He also owns arthouse distributor Magnolia Pictures (Capturing the Friedmans), TV library holding company Rysher Entertainment (“Sex and the City,” “Hogan’s Heroes,” etc.) and lots of other nifty stuff. 2929 Productions, his “filmmaker-driven” company based in Santa Monica, has recently produced such high-profile (or soon-to-be high-profile) films as Godsend, with Robert De Niro, and The Jacket, with George Clooney, co-produced with Steven Soderbergh and Clooney’s company, Section Eight. From all outward appearances, Cuban is without a doubt one of the most fortunate of a new breed of techno-savvy American dreamers. Notice I didn’t say “lucky,” because the enormity of his success can only partially be traced to being on a first-name basis with lady luck. The rest can be attributed to vision and hard work.

How did he get here? At the height of the dot.com boom, legend goes, he and his partner, Todd Wagner, sold their business, Broadcast.com, to Yahoo for $5.7 billion. (Yes, that’s billion, with a “B.”) Afterward, Cuban didn’t buy an island in the Caribbean and write novels, as I probably would’ve done, he instead decided to try to change the face of motion picture distribution. He and Wagner seem to be putting their money where their dreams are. Their ingenious plot to take over the entertainment world involves the creation of a vertically integrated conglomerate that will allow vision-to-viewed entertainment production to happen under one virtual roof. Not that that’s a novel idea, necessarily (the old studio magnates had the same basic idea). But it’s novel in today’s world, and it’s being done in a way that the world has never seen. Get the DVD as you’re walking out the theater door? On-demand HiDef home screenings of the latest blockbuster and artsy indie?

Experimenting with alternatives to the status quo is where these guys get their juice, and an afternoon with them would undoubtedly make your head swim. They are revolutionaries who enjoy shaking things up. They believe in innovation, in knocking down traditional doors and barriers, in breaking through windows… Definitely windows… Let it be said again—Cuban and company definitely do not believe in windows.

Tim Rhys, Moviemaker Magazine (MM): Mark, it seems every time I turn on the TV or open a magazine, I see your mug. Now that Howard Stern is in exile, perhaps you can assume the throne as the King of All Media. Are you ever afraid you’re spreading yourself a little thin?

Mark Cuban (MC): No. I work with great people. The Mavs have a great CEO, Todd runs 2929 and Landmark, I just have to push HDNet, high def TV and HD production. On a day-to-day basis, I live by e-mail. Any of our people can reach me and get a response faster the most people in cubicles sitting next to each other.

MM: What I know of your motion picture business model is a moviemaker’s nocturnal emission. You have gobs of cash, you’re making relevant films, you’re on your way to being the first to truly exploit a distribution technology (digital theater projection) that has enormous potential and you’re a partner with several traditional movie studios (such as Warner Bros.snd Lions Gate). Two part question: How do you see the next 10 years evolving for you as a producer and entrepreneur? And are you also dating a couple of supermodels on the side?

MC: Bite your tongue on the models or my wife will get the scissors out and my six-month-old will spit up on you! The vision Todd and I (Todd gets more credit than me) have is to remove the roadblocks and tired old habits both in getting projects produced and in getting content to consumers. High def enables a lot of time-consuming and expensive steps to be removed from the creative and distribution process.

You can argue about the aesthetics of every medium. The reality is that if we can remove time and cost and conversion from the creative process, we can get movies to screens and homes faster, with wider distribution. This means the smallest of small producers can go wide, and exactly what they saw on the monitor Monday, edited on Tuesday and transmitted on Wednesday can be seen in theaters, homes and anywhere else people want to watch by Friday. That changes the dynamics of the film industry.

Because we own HDNet, Landmark, 2929, HDNet Films and Magnolia, we can control the chain from vision to viewed, and enable the creative and the consumer to get the experience they want, when they want it. If Todd gets his way, windows will be a thing of the past.

MM: Your television network, HDNet, is also currently developing movies and television content for its all-high def stations. I know you see high def as the future, but what do you say to the millions of average income, old school households that don’t see the point, so to speak? They’re satisfied with what they have. Do you wait for a more enlightened generation to come of age, or do you believe that you can eventually convince these Americans en masse that they need what high def can deliver?

MC: Not everyone is a movie fan. Todd and I are. HDNet movies are all OAR, full resolution. No “upconverted” films. That’s a new way of watching movies on TV that only HDNet enables. Movies that we never saw in a theater, we can watch on HDNet movies, almost exactly liked they looked in a theater, no more pan and scan destruction.

The good news for the masses is that HD TV price points are falling like a rock and will continue to do so. And TV manufacturers are getting out of the analog TV biz, so over time, HD TV will be ubiquitous.

MM: What sort of movies are you looking to make? For instance, are you primarily interested in traditional fare, or are you planning to push the envelope similar to what HBO attempts to do?

MC: We’ll make anything we think is interesting. We will keep our budgets small, but will do the projects we like.

MM: Are you willing to invest in young and “unproven” behind-the-scenes creative talent the way other cable networks often do?

MC: Absolutely. If the script and talent are there and it’s in our budget, we want it.

MM: I read that you’re interested in writer-directed scripts in the $10 million to $30 million range. How does an independent moviemaker go about pitching a feature proposal to 2929? Or is your other company, HDNet Films (headed by Jason Kliot in New York), which focuses on $2 million and under video projects, more appropriate for indies to approach?

MC: If you want the big budget, you have to really impress Todd, so bring the supermodels (I’m kidding)!

MM: 2929 Productions has an amazing number of exciting movie projects underway right now. For instance, you’re co-producing The Jacket with Adrien Brody and The Criminal with John C. Reilly and Maggie Gyllenhaal, as well as Godsend, with Robert De Niro. How do such diverse projects fit the 2929 mold?

MC: We picked up the existing projects you mention because Todd realized that we could learn a ton by working with a variety of smart people. From producers, directors, distributors and talent, we invested in projects we loved, and had bigger partners that could reduce our risk. But that also allowed us to learn a lot about the business.

On the HDNet side, all indies should apply. We will try anything once if it excites us (how did we get on the supermodel subject again?).

MM: How did you get the incredibly talented Steven Soderbergh so firmly in your stable? Is it your emphasis on the writer-director that attracted you to each other?

MC: Talent is king. Todd and I both recognize that. Great talent brings in more great talent. Todd has done an amazing job of connecting with people we thought we could only dream about working with, including Steven.

MM: As aggressive as you seem to have been as a company, there is distinct evidence of financial prudence, too. So far, for example, you still make it a point to partner with studios on the distribution of each film in order to divide costs. Is this model written in stone, or do you think it’s only applicable to these early, getting-your-feet-wet years of 2929’s existence?

MC: It’s in stone for 2929. For HDNet films, since budgets are lower and we have HDNet, Landmark and DVD for outlets, we can take many more chances.

MM: What’s in store for my favorite theater chain, Landmark? Any obvious changes? It’s the country’s largest “art house” chain, but it’s not nearly large enough, if you ask me. Will you eventually be adding screens? The number of Landmark screens is the chief reason Seattle’s quality of life is so high, by the way. But I spend a lot of time in Maine, now. Can you guys open a Landmark Theater here? Please?

MC: We love the chain. We will be freshening up screens and adding and building more… but Maine? Not yet.

MM: You’re not afraid of being innovative, obviously. Have any of your “revolutionary” ideas, such as releasing movies on DVD at the same time they’re released in theaters, met with resistance from the industry? Is anyone threatening to send dead fish to your door if you do that?

MC: Windows? We don’t need no stinkin’ windows. We are viewer and creative driven, not tradition driven. We want to get movies to people where and when they want them. Look for us to premiere movies on HDNet, in Landmark Theaters and to have them in mailboxes on DVD the same day.

We are also looking to offer movies in theaters straight from the camera and see how that works. We’ve had some great fun taking HDNet productions and showing them in their original HDcam and D5 formats, uncompressed and untouched through digital projection. The look is amazing. We want to expand that effort and completely get compression out of the digital cinema process, if we can. You got a problem with that?? MM