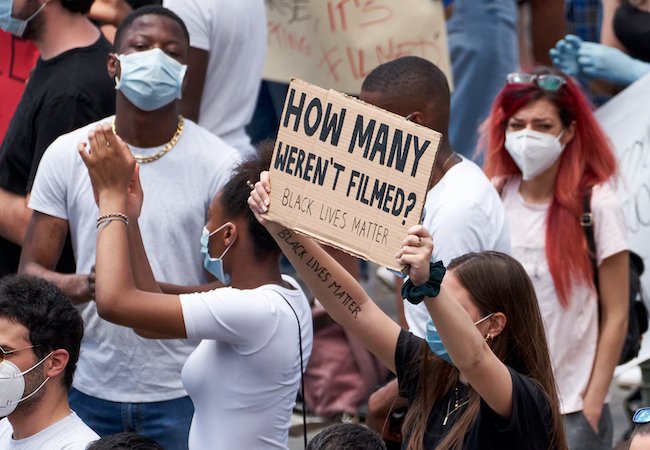 Viola Davis, Jamie Foxx, and many more react to the Derek Chauvin verdict; the group behind the Golden Globes ousts its ex-president over Black Lives Matter comments; a last-minute Oscar “surge.” All in today’s Movie News Rundown.
‘GUILTY! As It Should Be’: That was Viola Davis’ reaction to Derek Chauvin’s three convictions in the murder of George Floyd. She added: “Now….Rest In Peace George Floyd. Rest. You and your family have been vindicated. ” Jamie Foxx described a bittersweet day: “I am happy and relieved that the person that did this horrendous thing to you and your family was found guilty… The bitter is that we cannot bring you back.” Ahmir “Questlove” Thompson tweeted: “We still have to fight for justice yall. Remember that ‘we voted Obama in yay racism is gone!’ feeling? Yeah…let’s learn from that.” Here are more reactions from the film world, from Deadline.
Derek Chauvin: Travon Free, whose film Two Distant Strangers is Oscar-nominated for its portrayal of an endless loop of police violence, wrote: “We all watched what happened to George Floyd on May 25th of last year. The jury believed their own eyes. Justice for George has been served.” He elaborated to The Hollywood Reporter: “The fight to end police violence is not over, and one verdict won’t change the system that perpetuates it, but it is a sign that we have the ability to move in the direction of a society where these things no longer happen.”
HFPA: Philip Berk, the 88-year-old former president of The Hollywood Foreign Press Association, the group behind the Golden Globes, has been kicked out after circulating an email that said “Black Lives Matter is carrying on [Charles] Manson’s work,” criticized BLM co-founder Patrisse Cullors for buying a $1.4 million home, and called BLM a “racist hate movement.” The Los Angeles Times first reported on the email. HFPA said in a statement to The Hollywood Reporter that it “condemns all forms of racism, discrimination and hate speech and finds such language and content unacceptable.”
More HFPA: THR also reports that two advisors have cut ties with HFPA: Judy Smith, the crisis PR expert who inspired Scandal‘s Olivia Pope, and Shaun Harper, a professor at USC.
Meanwhile, Brendan Frasier: Unrelatedly to the current fiasco, THR notes that Frasier accused Berk in 2018 of groping his buttocks at an event in 2003.
Oscar Nail-Biter: Variety says there is a “a palpable surge for Florian Zeller’s The Father” going into Sunday’s Oscars ceremony, which could boost Anthony Hopkins’ Best Actor choices. Can I highly recommend watching The Father if you haven’t?
Secret Invasion: Game of Thrones star Emilia Clarke has a secret role in the new Disney+ show Secret Invasion, details of which are mostly… you guessed it. Matt Donnelly, my favorite person at Variety, has details. The previously reported cast includes Samuel L. Jackson, Ben Mendelsohn, Kingsley Ben-Adir, and Olivia Colman. Jackson will return to the role of Nick Fury, and Mendelsohn will again play his Captain Marvel character, the shapeshifting Skrull named Talos.
CODA: If you’re looking for a very lovely, feel-good movie that isn’t sugary or cheesy about it, Deadline reports that Siân Heder’s Sundance darling CODA, about a child of deaf adults who dreams of singing, will arrive in theaters and AppleTV+ on Aug. 13. Apple paid a record $25 million for the film out of Sundance, where it was the first film in Sundance history to win all the top prizes: Special Jury Award for Ensemble Cast, the Directing Award, the Audience Award and the Grand Jury Prize in the U.S. Dramatic Competition.
Main image: A Black Lives Matter demonstration in Rome, Italy, June 7, 2020, courtesy of Shutterstock.