Untold: Malice at the Palace on Netflix: Who Is John Green, the Guy Who Threw the Cup? 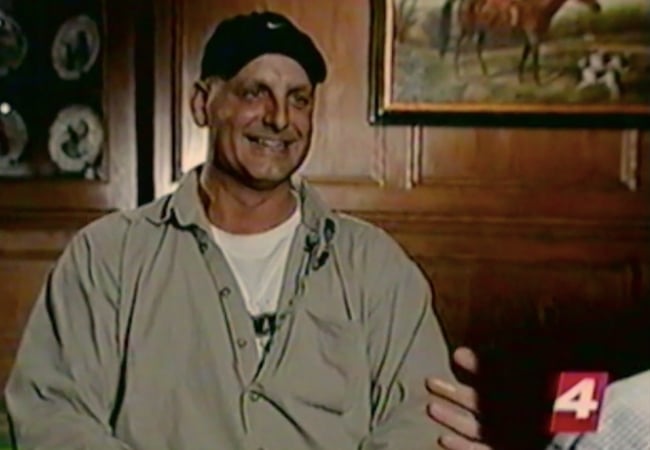 If you’ve seen the first episode of Netflix’s new sports docuseries Untold, you may want to know more about John Green, the man who threw the cup at the infamous Pistons-Pacers brawl.

On November 19, 2004, a fight broke out between fans and players at an NBA game between the Indiana Pacers and the Detroit Pistons at their home stadium, the Palace of Auburn Hills. Untold: Malice at the Palace breaks down every detail of the legendary brawl that reached a fever pitch, according to the docuseries, with the throwing of that one fateful cup.

The cup-thrower in question, the docuseries explains, was John Green, a man who has now become famous in his own right for throwing a cup that hit Pacers player Ron Artest, who has since changed his name to Metta Sandiford-Artest.

Green has admitted to throwing the cup, but denies that he intended to hit Sandiford-Artest with it, according to the Toledo Blade.

All the key players involved in the brawl were interviewed in Untold, including former Pacers players Sandiford-Artest, Jermaine O’Neal, Stephen Jackson, and former Piston Ben Wallace. Former Pacer Reggie Miller, who had a broken finger that day and was present at the game but did not play, was also interviewed.

Going into the game, the docuseries explains, “the Palace,” as the now-demolished arena was nicknamed, had a highly charged atmosphere. The Pacers had lost to the Pistons there the previous season, and the Pacers were intent on beating the Pistons to earn their shot at the 2004 NBA Championship.

When the altercation occurred, the game was called with only 45.9 seconds left in the fourth quarter, according to ESPN and the Pacers officially beat the Pistons 97-82.

As Miller explains in the docuseries, the brawl began when Sandiford-Artest fouled Wallace on the court at the end of the fourth quarter and the two players got into an argument. But Miller says their squabble was nothing too out of the ordinary until Sandiford-Artest made one odd move.

“Where it all turned is when Ron went and laid on the scorer’s table,” Miller says.

Former prosecutor Gorcyca was able to identify Green as the cup-thrower from security footage, he explains in the docuseries, because he recognized Green as having dated one of his neighbors. 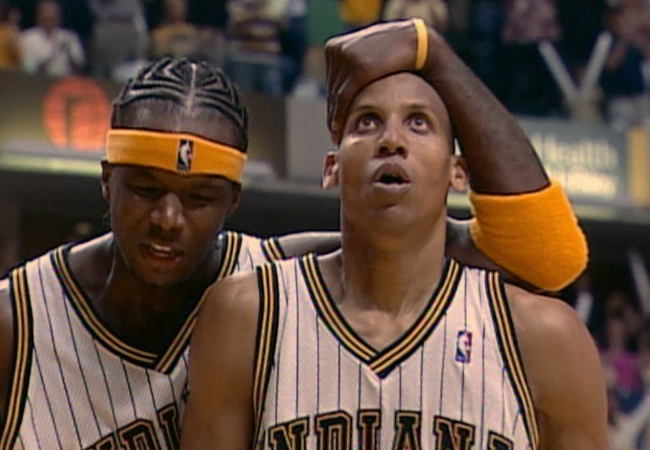 Jermaine O’Neal and Reggie Miller pictured at another Pacers game in Untold: Malice at the Palace

“I ended up identifying the cup-thrower myself,” Gorcyca says in the docuseries.

Green admitted to throwing the cup in an interview with law enforcement from 2004, the audio of which was played in the docuseries.

“It was really wrong. Those guys shouldn’t come up like that into the stands. Especially if they have the wrong guy,” Green says in the interview.

Green’s cup hit Sandiford-Artest as he was laying down on the scorer’s table, “taking five,” Sandiford-Artest says in the docuseries, and practicing a counting technique he had learned from his therapist to calm down in stressful situations.

When the cup hit him, Sandiford-Artest got up and went into the stands to find the person who had thrown it. As security footage in the docuseries shows, he ended up coming in contact with another fan who had been standing close to Green. At that point, the docuseries explains, other players entered the stands and the brawl began to spiral out of control.

Green was ultimately charged with two counts of assault and battery — the first for throwing the cup, and the second for striking Sandiford-Artest from behind in the stands. According to a 2006 story from the Toledo Blade, Green was sentenced to 30 days in jail for striking Sandiford-Artest, but the other count of assault and battery for throwing the cup was dropped. He was also ordered by a judge to attend anger-management classes.

The Blade also added the following:

“Green, whose image was caught on video during the melee, said he was innocent because he hit Artest in defense of himself and his fellow fans. He also argued that he merely lobbed the cup into the air and never meant to hit anyone with it.”

In an on-camera interview shown in Untold, Green discussed the incident.

“Did you feel bad at all when Ron Artest is flying up there and goes right by you and attacks the guy next to you?” an interviewer asks Green.

“I felt relief,” Green replies. “The only thing I regret is not putting my foot out a little sooner.”

But despite Green’s comments in the interview, he and Sandiford-Artest later developed an unlikely friendship.

According to IndyStar, Green and Sandiford-Artest, who then went by the name Metta World Peace, did a radio interview together in 2009 in which they said they became friends after Sandiford-Artest reached out to Green on Twitter.

“Ron’s a good guy,” Green later said of Sandiford-Artest in a radio interview on ESPN Los Angles in 2012, according to IndyStar. “And you wanna know what? I like to think the same thing about myself. Yes, I’ve made bad choices and maybe Ron has, too, but I think he and I are very similar. We’re very passionate people, but we admit when we’re wrong, too. … We just started talking and we hit it off. He apologized and I did. … It came from him and it takes a lot to do something like that.”

Untold: Malice at the Palace is now streaming on Netflix.