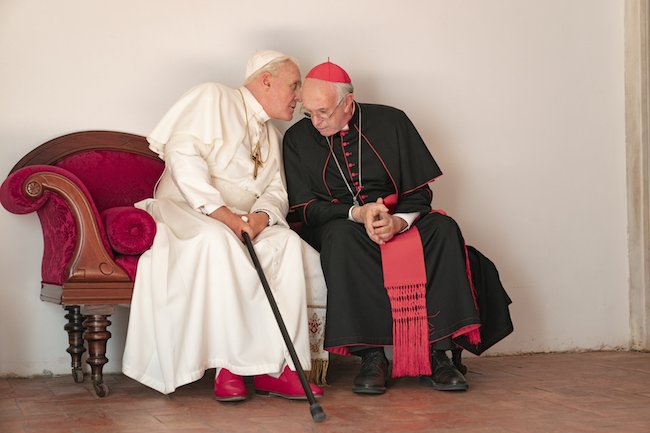 Anthony McCarten has a big surprise on the very first page of his The Two Popes script: It’s funny.

The film, in which Pope Benedict (Anthony Hopkins) and future Pope Francis (Jonathan Pryce) seek a path forward for a threatened Catholic Church, uses light touches to humanize two very different men as they make very heavy decisions about the fate of the faith. The first scene, which we won’t spoil here, is eternally relatable.

“My M.O. vis-a-vis humor is really just to make things lifelike. I try to put the same percentage of humor in a movie that I perceive there is in real life,” McCarten said in the latest MovieMaker Interviews podcast.

To that end, the film includes lighthearted moments involving soccer and unexpected musical cues, alongside tough explorations of the Catholic Church’s sex abuse crisis and a painful period in Argentina’s history.

McCarten wrote the screenplays for films that starred three of the last five Best Actor Oscar winners: Bohemian Rhapsody (Rami Malek), Darkest Hour (Gary Oldman) and The Theory of Everything (Eddie Redmayne). His next project is a Bee Gees biopic with Steven Spielberg.

You can listen on your favorite platform below:

The Two Popes is in theaters now and arrives on Netflix Friday.

A Hidden Life: August Diehl and Valerie Pachner Say Terrence Malick Filmed Them While Sleeping in Between Takes
Watchmen: In Praise of High-Risk TV (Podcast)