Do Things, Don’t Just Say Things: Six D.I.Y. Tips From the Director of Turn It Around: The Story of East Bay Punk

What is punk rock? It should first be said that punk is different things to different people—and it only continues to evolve so long as there are new radical ideas, art, sounds and effort being injected into the culture.

To us and many from our region in Northern California, we have always seen our version of punk to be not so far removed from the activist spirit of the Berkeley hippie movement. The styles of punk and hippie music are not similar, but to us, they are certainly related ethically speaking. East Bay punk encourages you to raise your voice in resistance to the powers that be, to fight for the freedom to be yourself, to embrace differences in others and to foster creative community, not destroy it.

Where we come from in Contra Costa County, our parents were waitresses, truck drivers and refinery workers. As we ventured out to Berkeley (not but 15 minutes away from us) and the wider East Bay, the kids we met in those cities were the children of professors, renowned artists and densely-intelligent authors. Where our parents might have freaked out when we would cut or dye our hair, the parents of Berkeley punks were harder to offend.

When it formed in Berkeley in 1986, The Gilman Street Project brought together the working-class punks of Contra Costa County and the progressive punks of Alameda County—both being neighboring counties in California’s East Bay Area. That mixture of different kinds of voices made for a uniquely thoughtful movement. Gilman, at its core, was a concerted effort to build a “community center” that would serve as an antidote to racism, sexism, homophobia, corruption and violence that were plaguing punk scenes and venues in the 1980s. The venue became a “safe” catalyst for a bright and artful storm—a spirit that still continues at the club 30 years later. Venues, groups and spaces like Gilman, that encourage us to share ideas and to support each other in spite of our differences, are now more important than ever.

From Turn It Around: The Story of East Bay Punk: Jesse Luscious of the Berkeley, California punk band Blatz performs in 1990. Photograph by Murray Bowles

We made Turn It Around: The Story of East Bay Punk to shine a light on our creative peers and our shared history, not to mystify “glory days” or make anyone feel like they missed some sort of legendary era. Our biggest hope is that the documentary might inspire those who feel alone, hopeless or misunderstood to seek out others to build something new and different of their own—to make films, to start bands, to organize garage and backyard shows, to create together and inspire each other.

That mission of inclusiveness and inspired creativity influenced the way we made our film. Here are some ideas you can use to make and promote your own film in that same spirit.

When we started production on our film, we limited ourselves to two “styles” that would affect the overall look and feel of the film: VHS and black-and-white Xerox. Both were synonymous with 1980s punk culture, and in keeping with these themes, we set reasonable goals for what we would allow ourselves do with animation, interstitials, video effects, lower-third text and many other aspects of the project. It was helpful to our budget to keep these two styles in mind at all times, and it helped us stay on track.

From a scene in Turn It Around: The Story of East Bay Punk: East Bay drummer Kamala Parks at a show in Pinole, California in 1989. Photograph by Murray Bowles

Let your work show your humanity. As many argue, one of the reasons early Star Wars films resonate with our culture is because of the use of “practical art”—art that you can tell was created by a real-live human (not a computer). The models, drawings and other art that appear seem all the more real—or at least have more heart—when they are handmade. Punk rock has the same unique and sincere appeal. Don’t be afraid to show natural flaws in on-screen photos, animation or other art that appears in your film. In order to help transition from 1980s live VHS footage of bands playing into modern-day interviews with our documentary subjects, we bought a VHS camera on eBay and filmed every one of 185 interviews with it, alongside using our digital cameras. Sure, it took a long time for our digital archivist to transfer them all to DV, but it was worth it to be able to show the actual effect of static warmth that comes from real VHS tape. Whenever possible, use practical effects. People will be able to feel the extra effort and time you put into your work.

Help Is Right In Front Of You

Green Day (our executive producers) asked me to assemble a crew of folks to make this film. As a first-time filmmaker, the cabal of folks I knew with filmmaking experience was very limited. We were lucky to have a few folks involved who knew more about film that I did, but who would we find as Story Editors? Additional Camera Operators? Archivists? We looked to our local East Bay punk community and asked around. You have a degree in Journalism and Anthropology? Sounds like you could helm the story edit! You are a photographer? You can be an additional Camera Operator! You have a huge punk record and zine collection? Sort through these huge piles of rare archival footage, photos and show flyers and sort out what is relevant to our film! 90 percent of the crew on Turn It Around had never been involved in making a film before, and luckily, our producers allowed us to make our mistakes. We learned together and helped each other, and after three and a half years and sorting through 35,000 images, 500 hours of interview footage and over 1,000 archival footage clips, we got the job done. 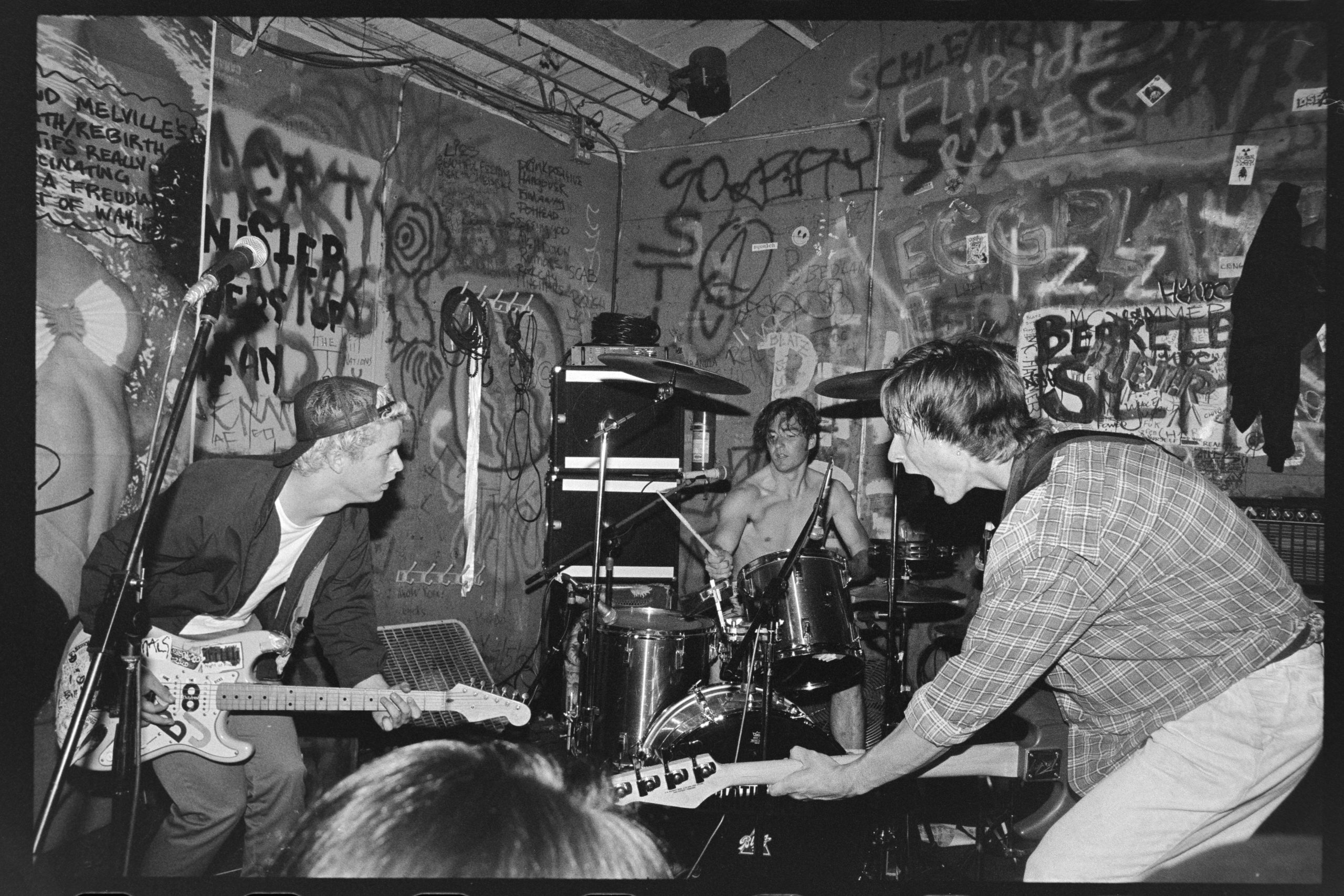 From a scene in Turn It Around: The Story of East Bay Punk: Green Day performs at 924 Gilman Street in Berkeley, California. Photograph by Murray Bowles

We’re All Part of the Same Gang

Do you want a lot of people to like your film? One way to possibly make that happen is to include a diverse cross-section of voices in your project. Be conscious of who is in your cast and crew. Involve a wide spectrum of people that look and sound nothing like you. Ask them what they think about your ideas production or story-wise. Allow them to challenge you. If you are doing a documentary, watch the “dude quotient” in regards to your cast of interviewees. Speak to women, people of color, LQBTQIA folks and other people who have a less prominent voice in our society. By including diverse voices in your film and in the making of your film, you are A) doing something awesome by promoting diversity and equality and B) widening the scope of who might hear or see something in your film that they relate to.

From a scene in Turn It Around: The Story of East Bay Punk: Blatz plays a show in 1991. Photograph by Murray Bowles

Do you ever come up with a creative idea and fail to move forward with it? Yes? Well, we all do that sometimes. But it can’t be par for the course. The early group of creatives we used to run with had an old saying that helped us get things done: “Thought + Action = Progress.” It’s simple: If you want to create things (art, music, film) you must try, come hell or high water, to make them a reality. If you want to see what is in your heart and mind become a real thing in the real world, you have hop to it. And if you don’t move forward with your brilliant idea, no one will make it happen for you and you have no real reason to complain when it doesn’t happen. I guess that is the root of the “D.I.Y.” way, but to be making things happen is punk. Do things. Make things. Don’t just say things. And if it is hard to complete, persist. Fail and fail again. This is how you improve and develop an actual body of work outside of the one in your imagination.

When promoting your film, approach the idea like a punk band on tour. Don’t wait for your audience to come to you. Go find them! So many musicians sit on their couches and wait for some magical major label to come along and sign them, in some crazy hope that they will be made instantly famous. Punk bands like Green Day played a million shows for no money to five people in a living room in Kansas back in the mid-’90s. They used an “anywhere, everywhere” philosophy in how they got their music out there. “Are there people at the gig who are interested in hearing us? OK! Count us in!”

From a scene in Turn It Around: The Story of East Bay Punk: Green Day performs at 924 Gilman Street in Berkeley, California. Photograph by Murray Bowles

I use the same D.I.Y. punk approach to how I am promoting this film. Do you have a podcast, blog, or zine that you want to have me talk about the film on? Cool! Do I care that you have only 10 followers? No! If you are interested in the subject of this film and helping get the word out to others about it, I will talk to you. Perhaps you and two or three of those people will read your blog interview with me or your review of the film and head out to a theater to see it. If a few folks are convinced to see the film, that certainly feels like a good use of my time. And it’s a better use of my time than sitting around wishing that something good would happen for my project.

Feel free to take or leave any of this advice. Punk rock isn’t what I or anyone else tells you it is. Punk rock is what you make it. MM

Turn It Around: The Story of East Bay Punk opened in theaters July 28, 2017. Featured image photograph by Murray Bowles.

The Creative Distribution Fellowship: How Sundance Institute Is Working to Build Moviemakers From the Ground Up
Indie Animated Delight: 2014 French Feature Mune: Guardian of the Moon Opens For One Day in U.S. Theaters