Handling the Truth: Director James Vanderbilt and Mary Mapes Search for the Light 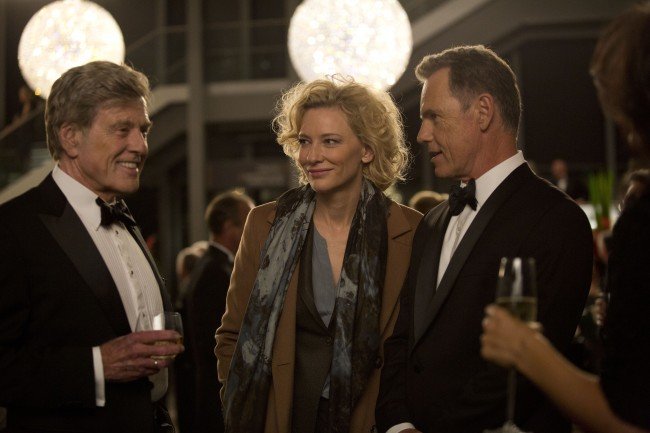 “I have to take some kind of perverse pride in the fact that I was fired so epically—so spectacularly—that only a feature-length film could do it justice,” Mary Mapes told an audience at Manhattan’s Lincoln Plaza Theater, after a Saturday afternoon screening of Truth.

James Vanderbilt, who also wrote the script, makes his directorial debut with the film, based on Mapes’ book, Truth: The Press, the President, and the Privilege of Power. The Zodiac screenwriter picks up the story of the talented and tenacious 60 Minutes II news producer as she’s on the trail to discover evidence that George W. Bush used his privilege and connections to avoid military service in Vietnam. Cate Blanchett plays Mapes, and acquired some of her mannerisms, like her clipped voice and the way she plays with her hair when she’s nervous.

“I only wish I were as pretty and smart and tall as Cate,” Mapes laughingly told the packed theater audience. Robert Redford plays former CBS news anchor and Maples’ producing partner, Dan Rather, with just enough of the gravitas and stature the role requires.

Feeling pressure to get the story out before the tight presidential race between Bush and John Kerry, CBS rushed the segment out on September 8, 2004. Mapes, Rather and their entire team (played by Dennis Quaid, Topher Grace and Elisabeth Moss) celebrated a job well done. But by the next day the story blew up in their faces. The reporting was solid, but much of the story relied on documents that were copies—not originals—and Republicans challenged their authenticity. Conservatives and cyber-lynch mobs went on the attack and accused Mapes of political bias, fraud and worse. Other journalists, especially on other news networks, became obsessed with superscripts and typefaces rather than the substance of the news report at a time when Bush was sending troops to Iraq to fulfill a military duty he may have shirked.

“Our story was about whether Bush fulfilled his service. Nobody wants to talk about that. They want to talk about fonts and forgeries and conspiracy theories,” Mapes says near the end of the film as she faces down the panel of conservatives that CBS put together to cross-examine her. In the end, Mapes is shown the door, or rather, as the president of CBS News (Bruce Greenwood) informs her, “terminated.” The scandal led to Rather’s retirement and ended his career at CBS News. In an ironic twist, later that year CBS News received a Peabody Award for the Abu Ghraib prison story scandal story that Mapes had helped break.

Mapes lives five miles from the moneyed suburban estate of former president Bush. These days, though, she has been busy promoting Truth. Prior to the Lincoln Plaza screening, she had just returned from the Rome Film Festival. Several weeks earlier she attended the film’s premiere in Manhattan and partied until late at night with the film’s stars, director and her pal Rather. And last Friday and Saturday she appeared at six screenings to introduce the film and participate in Q&As, several with her former colleague, who is still a friend and a father figure.

After the screening, I asked Mapes why she felt Vanderbilt was the right director to put her story on the screen. She told me, “He is an exquisitely sensitive student of human beings. He has an unbelievable emotional intelligence. I trusted him and believed him and he hasn’t let me down one single bit. I don’t know how many people can walk out of a big Hollywood production and say that.” She also cited Vanderbilt’s ongoing relationship with Robert Graysmith, author of the book that Zodiac was based on, as something that gave her confidence in his ability to do a story right.

Robert Redford, director James Vanderbilt and Stacy Keach on the set of Truth

I spoke to Vanderbilt in turn about his ambitious directorial debut.

Paula Schwartz, MovieMaker Magazine (MM): You’ve been doing pretty well as a writer, with Zodiac and The Amazing Spider-Man. Why did you decide to make a film about journalism the subject of your directing debut?

James Vanderbilt (JV): If I hadn’t gone into movies, I would’ve wanted to go into journalism, so it’s always been an interest of mine. I’d been looking for something to direct for a little while and I knew I wanted it to be something I wrote. I just became fascinated with the story. I read an excerpt of Mary’s book in Vanity Fair when it came out and that’s what got me to read the book. Journalism is such a vital and important profession for all of us.

I also love process films, films that take you behind the curtain of something and teach you how something is done. I felt like this was a really good way to do that with journalism. Growing up I thought that Dan Rather knocked on everybody’s door and made the phone calls. The guy you see on screen, you always assumed, is the one doing all that work. You don’t think about the news producer, so I loved the idea of telling a story through the producer’s eyes. And at the same time, the story has all of the added value and benefit—narrative benefit for me—of watching people put together a story with really high stakes and seeing it all fall apart. The fall-out from that is dramatic and emotional for Mary Mapes. I got to know Mary more and realized what her journey was, how she got to where she was, how all of those layers got stripped away. I thought it was a really powerful, compelling story.

MM: Did you spend any time talking to reporters or visiting newsrooms?

JV: I spent a lot of time with journalists. I get to go out and ask people about their lives and be the ultimate fly on the wall. For Zodiac, a homicide film, I got to sit with San Francisco police department detectives and ask, “What’s your day? How do you do that?”As a writer, and now, as a director, that’s one of the coolest things about the job.

I really wanted to capture the excitement of chasing down a story because it’s like being a detective. You’re tracking a mystery. You’re trying to figure it out. You’re trying to get people on the record and there’s a high that comes from that.

MM: Aren’t you asking for trouble with a film that has that title?

JV: I don’t know what you’re talking about. [laughs] I think it’s going to be fine. I wanted to call it Truth because it’s not that this is the truth, but rather it’s the thing everyone is searching for in the movie. And the movie is based on Mary Mapes’ book, Truth and Duty: The Press, The President and the Privilege of Power. I thought Truth was kind of the perfect title because there’s irony in it. That’s the thing that is most debated in the movie: What really happened? What’s the truth here? And it’s the thing that takes down Dan and Mary. It takes down pretty much every character and leaves him or her less employed at the end of the film than at the beginning of it. But everybody’s looking for the truth. That’s what the job of journalism is.

MM: How do you respond to criticism that you have taken Mapes’ side without giving an opposing view?

JV: You have to tell your story through the eyes of your protagonist. That’s the price of admission. It was very important to give a ton of information, the memos written up on Microsoft Word. It was incredibly important not to portray the people who work at CBS as moustache-twirling villains. Everybody in the movie is just trying to do his or her job. Those jobs are different and they have different outcomes and goals, but they’re just trying to do their job the best way they can.

MM: The movie raises some serious issues about journalism, including how much corporate pressure is brought on news organizations and what they cover. Can network news organizations have autonomy anymore to do investigative journalism? And how hard was it to balance those themes with the thriller aspects of the film?

JV: I didn’t want to make a film that feels like homework, that’s going to lecture at you for two hours, because I don’t like those films. First and foremost, I wanted to tell a compelling story, but if you tell a compelling story and the characters in that story care about the issues, maybe it can make you start thinking about the issues, too. Any conversation that comes out of this would be gravy on top of making the film. We should have a conversation about where we are in terms of media in this country.

MM: Cate Blanchett and Robert Redford are big names for a first-time director. Was it Zodiac or White House Down that made them want to work with you?

JV: Where Cate is in her career, she doesn’t need to work with a first time director. She’s getting calls from everybody, but she was willing to take a risk. There are no films that I’ve directed that she could look at and say, “Oh he knows where to put the camera. He knows how to treat an actor or craft a performance.” There’s none of that for her to rely on. Yet she jumped off this cliff with me and she helped get some of the financing.

In the very beginning of the movie, her character is knitting. Mary took up knitting when all this happened and there’s one line in the script about it. And Cate didn’t know how to knit, so Cate learned to knit, for one line! But for her that’s what the job is, so between takes and when we were shooting other stuff, she practiced her knitting. And the wrap gift she gave me was a knitted hat that she had made.

She works her butt off. She enjoys cursing. She’s viciously funny, incredibly smart, but also incredibly open in terms of what her process is. She wanted me to be the director of the picture, whereas someone with that kind of profile could say, “All right, look here, I think I know a little something about what I’m doing here.” The power on a set with a major movie star can be in his or her pocket.

It was the same with Robert Redford. The first time he directed a movie, Ordinary People, he won an Academy Award for it. So both of them at any time could have taken the power from me, but they never did.

MM: Talk about the sound effects in the film.

JV: Sound in movies can sometimes be really muddy, but this is a movie about words and dialogue. Our version of an action scene is two people arguing, so sound was really important. Also, there’s a lot of stuff coming through television and phones. Feeling the layers of that, the differential of the different media you’re getting sounds from, was really important. It takes place two and a half years before the iPhone came out, so everybody’s on their Blackberries and everybody is typing in the newsroom and there are fax machines. I wanted to create that tapestry sonically.

MM: What can reporters and news organizations learn from the film about covering the upcoming presidential campaign?

JV: It’s important to ask questions of powerful people. Sometimes the simplest answers are the realest ones and the truest ones. Those questions should be asked. MM