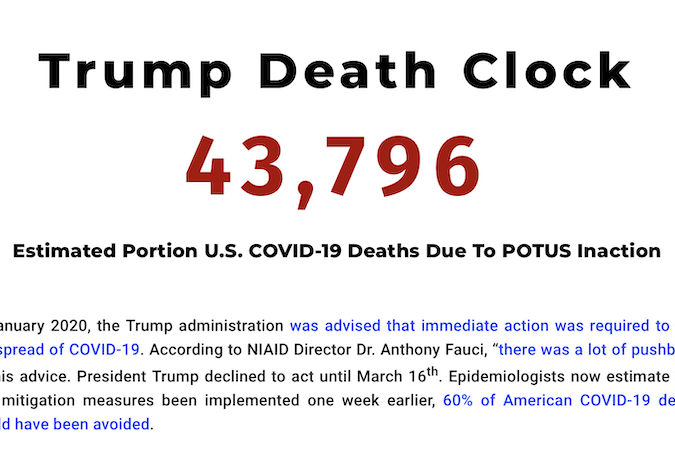 As of this writing, the clock lists 72,995 COVID-19 deaths in the United States, and says about 60 percent of them — 43,797 at this moment — could have been prevented if the administration had started mitigation efforts just one week earlier. By the time you read this, the numbers will have climbed.

“The Trump Death Clock is a memorial to human beings who did not need to die, and a call for more responsible and compassionate leadership going forward. As we speak, the President continues to demonstrate misguided priorities with respect to the seriousness of the pandemic, encouraging re-opening while acknowledging its increased danger the clock underscores the need for a serious course correction or more lives are needlessly imperiled,” said Jarecki, whose films include Why We Fight, about the military-industrial complex, The House I Live In, about prisons, and The King, which juxtaposed Elvis Presley’s final years with the decline of the United States.

Jarecki acknowledges that the clock, modeled on the National Debt Clock, is an attempt to dramatize the president’s failures in a way anyone can understand.

“It’s all in the branding, that stuff Trump himself does so well when he applies derisive nicknames to his rivals or attaches the name of a foreign power to a global pandemic. Accountability needs a brand, and the National Debt Clock is a helpful precedent,” Jarecki wrote in a Washington Post op-ed. “It demonstrates how to plant a symbolic flag in the numbers — one that can’t be knocked over by bluster or misleading campaign videos.”

Jarecki’s website for the clock links to news stories, including this widely cited New York Times piece, to make the case that the Trump administration ignored or downplayed the threat coronavirus posed. Jarecki notes that Trump has blamed China and governors, among others, for mishandling the crisis.

“What a powerful statement it would be if this clock could be displayed on billboards and projected on buildings in cities and small towns across America,” Jarecki wrote. “This would begin to honor those who lost their lives and, in their memory, demand more responsive and responsible leadership.”

Movie News: Josh Trank Won’t Give Up; COVID-19 Sacrifices Questioned; Gladiator at 20
Val Kilmer Had Just Explored a Bat Cave on the Day He Found Out He Could Play Batman