“Being In Charge Of Your Own Story”: Tony Gilroy on the Joys and Embarrassments of Being a Writer-Director

Tony Gilroy is one of the busiest and most successful screenwriters and directors working today.

His first produced screenplay was The Cutting Edge—a hockey rom-com released in 1992. Since then, he’s racked up 19 credits as a writer and three as a director, becoming best-known for blockbuster action movies and thrillers like Armageddon, the Bourne series, Michael Clayton, Rogue One, and Beirut.

Gilroy’s father was Pulitzer Prize-winning playwright and screenwriter Frank D. Gilroy. His younger twin brothers are screenwriter and director Dan Gilroy (interviewed here), and film editor John Gilroy, who has worked on many of his brothers’ films.

MovieMaker spoke with Gilroy at the Austin Film Festival. 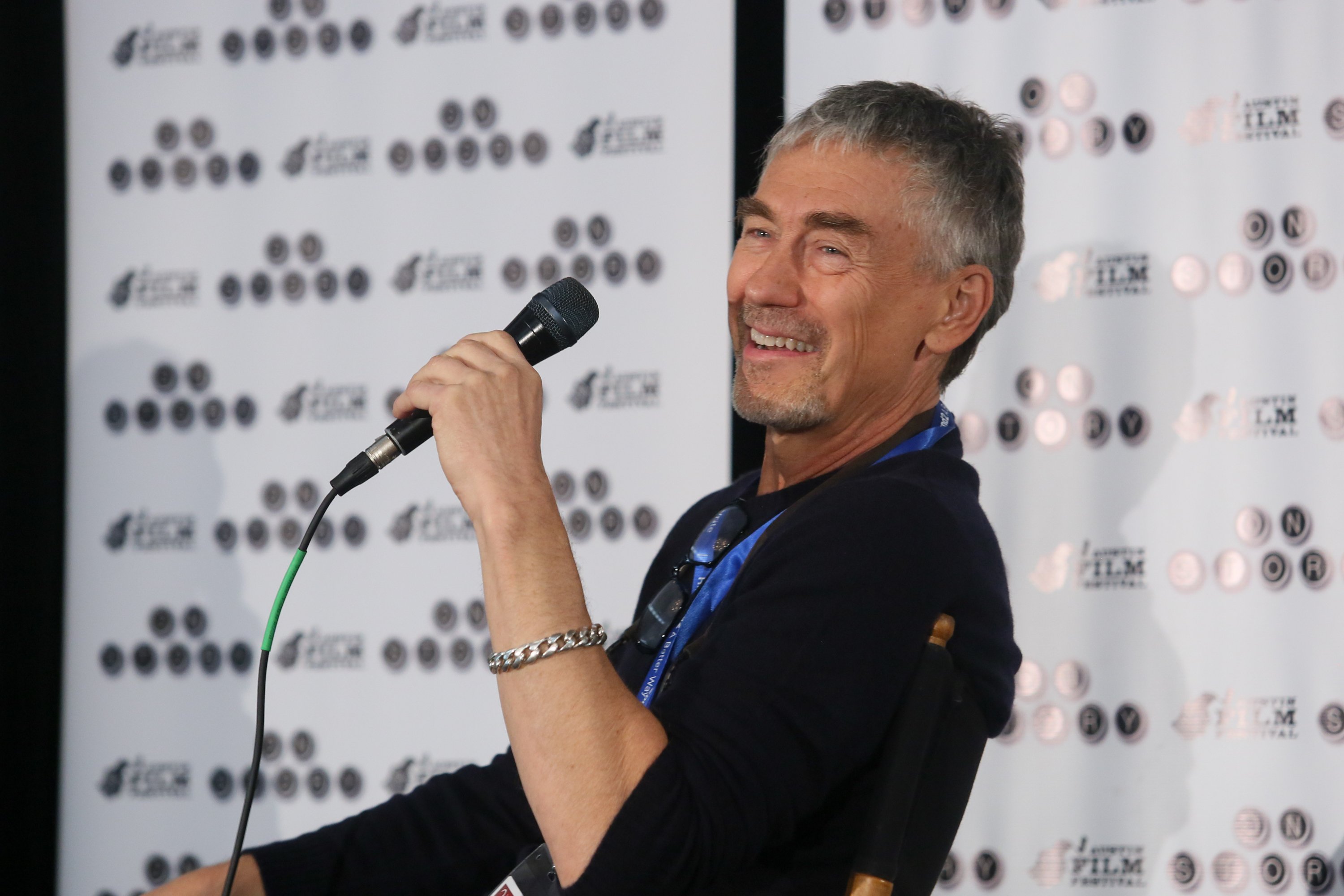 Lauri Donahue, MovieMaker Magazine (MM): Your brother Dan told me that your father moved your family to upstate New York because he didn’t want you involved in the movie business.

Tony Gilroy (TG): That is true.

MM: Yet you and your two brothers all ended up in the movie business. So how did that happen?

TG: We grew up in a very odd place. It was in the midst of a wrenching transition when we moved there.

It was about an hour from New York but with no train to Manhattan. But it was within the 60 mile zone from Columbus Circle. In the 1950s, when Robert Moses was destroying New York, they passed a law that said cops and firemen that formerly had to live within the five boroughs were now allowed to live within 60 miles of the City.

My father was this guy from the Bronx who bought this huge stone house.

A couple of houses went up around us. The guy who built them was called Tex Worley, and the place was called Worley Heights. The first houses he sold were to a New York City cop and a fireman. Then they went and sold this huge housing development to other cops and firemen. All of the streets had Texas names: Dallas Drive, Fort Worth Place, Pico Drive…

Instantly, in the middle of the woods, there’re all these cops and firemen and their kids. The older brothers were getting ready to go to Vietnam; they’d grown up in the City. The younger brothers and sisters were set free from the Bronx and Brooklyn.

The town that they moved to was 30 percent black—rural black, from the underground railroad days—with an old, conservative Black Baptist community. But that community was being torn apart by drugs that were coming from Newburgh.

An Air Force base was the third component. Those were glamorous, world-traveled kids.

Those three worlds converged in the school system. Everything happened at once—drugs and Vietnam. It was insane

MM: Your father was a famous and successful writer, and you were a writer’s kids, so were you and your brothers intellectuals?

TG: We had to completely live a double life. We had to be really rowdy to fit in. At the same time, we’d go to New York and see all the shows on Broadway. Fortunately, all three of us are very robust.

MM: Did you get into fights?

TG: All the time. That was a regular occurrence.

MM: Do you think that had any influence on your growing up to write action movies?

We weren’t droogs. We grew up with dirt bikes and in the woods. Nobody really paid attention to us. It was kind of Lord of the Flies.

I don’t remember ever doing homework. But we had an amazing library. And I was a huge reader. But I was a disaster in school. I didn’t like being in school. So I got out of there when I was 16.

I was a musician. I wasn’t going to be a writer.

I was a musician until I was in my mid to late 20s. Screenwriting wasn’t even on my radar.

MM: Your first credit was for The Cutting Edge in 1992, when you were 36. What was your path to that?

TG: I was a musician from the time I was 14. I started writing short fiction and novels in my late twenties. Then I stopped playing music completely. I stopped cold.

I was going to write a screenplay and then quickly go back and finish my novel, because I thought it would be simple to do.

MM: Why did you want to write a screenplay?

TG: I wanted to get some money. I thought that writing a screenplay was easy money—and I was really wrong. I tended bar for six years in New York while I was writing scripts.

The first thing I sold was to Cannon. The first gig I had that let me quit tending bar was a Chuck Norris movie that never got made. I was about 30 or 31 when I finally stopped tending bar.

Danny and I were a writing team for a while. We had some traction with a couple of scripts that we wrote.

I had a script called RSVP that was a very, very hot sample. That’s how I got an agent and everything else. It was a Preston Sturges kind of thing about a couple that has to get married, and they invite the president to their wedding.

The couple invites the president while they’re drunk, and then they break up, but then the president accepts. They did make it, eventually, in France.

I got some development deals. I did a studio movie at Fox. And J. Presson Allen hired me for a TV show she was doing. Six playwrights and me in the writers room… All that was going on around the time of The Cutting Edge.

Then there was the WGA strike, and we got wiped out in ‘88. During the strike, I had an interesting gig doing journalism for 7 Days magazine. I did a bunch of big articles for them.

MM: Did you ever consider giving up on screenwriting?

TG: I had already quit too many other things.

I was a pretty good musician, which is a long way from being good enough. I went to LA when I was 18. But I had kind of a wakeup call about where I fit on the food chain. So I transitioned out of being a player and I was a songwriter and a producer.

I’d gotten into art school. I rotated quickly through some other things. I knew that I could do this thing [screenwriting]. I was getting better. I was good at it

MM: When did you know you were good at it?

TG: That’s a really hard question to answer because it’s hard to remember.

I’ve been making things—all kinds of things—since I was a child. I really like making stuff.

All of the very weird things that I had done, all the weird jobs that I had, and not going to school…. When I got to screenwriting, I thought, “All these things are rewarded here.”

Being up on the news all the time, being obsessively interested in several different things…. You kind of just know when you fit little bit.

MM: At what point did you feel you could make a living at it?

TG: There was no other way out at that point. I could’ve gone off to be a PR writer. I got copywriting offers.

I was married. My wife wanted to get pregnant. The clock was ticking.

I was very diligent. I worked all day long and tended bar at night.

MM: What made you decide to become a director?

MM: So why didn’t you do it sooner?

TG: I didn’t do it sooner because of some sort of misguided attraction to virtuosity.

It pleased me to be a pure screenwriter who was in demand—someone you would need to have. I was becoming that person. And that was a really false god.

It satisfied me. I was making a great deal of money doing that.

MM: That’s why you didn’t want to become a director. But why did you want to?

TG: Because of the ability to make this film that you’re describing.

MM: Why was Michael Clayton the movie you wanted to direct? Is it that nobody else wanted to do it?

TG: Everyone wanted to do it. I wouldn’t give it to them.

MM: And that gave you the power to say, “If you want the script, you have to take me as a director”?

TG: I worked with Castle Rock for a number of years and it was a very benevolent company. They bought the pitch.

I told them, “I’m going to write a movie about a fixer who’s a lawyer and someone’s going to die.”

It got held up many years along the way. When I finally delivered the script—way, way later—they [Castle Rock] were not in a position of strength.

I knew it was good. It was inexpensive. It was written for a star.

The kinds of things that I thought were difficult in a film seemed doable to me. It wasn’t too terrifying.

MM: What did it feel like walking onto the set at 50 on your first day as a director, after years of having your work directed by others?

TG: It was very anti-climactic. We wrapped at 3 o’clock in the afternoon. It’s the “frog in the water” thing. We had a very long prep.

I’d made a lot of movies by then, so I knew what to do and what not to do. But I’d never gone tech scouting before. That was a shock. We went to Tom Wilkinson’s loft. It was 9:05 a.m. There’re 80 people there. And everyone’s like, “What do we do?”

MM: And you didn’t know?

TG: I knew in theory. But I’d never done it before.

And imagine this—the stupidity of saying, “Action.” What a cliché. I thought, “I’m going to have to say ‘Action.’” It seems so corny and weird but you have to do it. And there’s some time you have to say it for the first time.

There isn’t any script I ever wrote that I didn’t direct. Even the scripts I wrote with Danny back in the day.

MM: You made them in your head?

TG: I’m a journalist reporting on the movie I’m seeing. That’s what you’re supposed to be doing. You keep changing the story, but in the end that’s what you do.

The best part of being a director is getting to see the movie—being in charge of your own story.

The best thing about being a writer is that you have your privacy. For me, that’s the most deviant thing about directing.

From the moment you start directing a film, all of a sudden people have eyes on you. Everyone’s aware of where you are all the time. Sometimes you can draw energy from that. A lot of people get addicted to that.

MM: Do you have a home office?

TG: I have a home office and an office I go to. I also write in hotel rooms.

I’ll never equal the amount of time with other people that I’ve spent alone over 30+ years.

MM: What are the worst parts of being a director?

TG: The worst part of being a director is that you never get it right.

TG: I don’t think any directors are ever happy—ever.

When you’re directing a movie, you’re always deficient. When you’re a writer, you can always fix it until they take it away.

I think if you ask any director, they’ll say there’s no film they’ve ever worked on they’re completely satisfied with. I think that’s universal. MM

Hearing What’s In Your Head: Kenneth Lonergan On His Process of Writing As a Director
Things I’ve Learned as a Moviemaker: Bret Easton Ellis