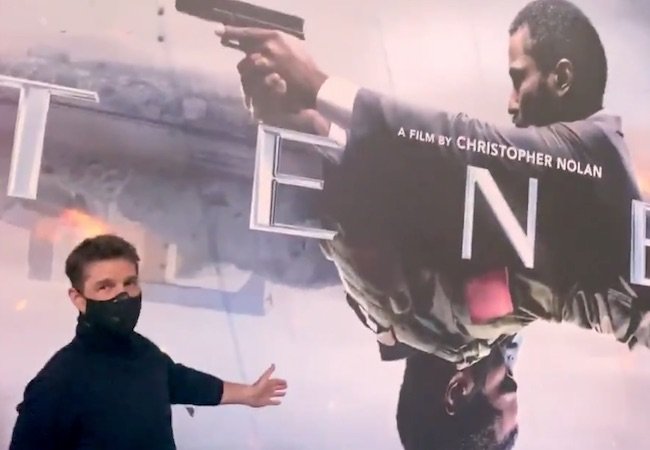 In today’s Movie News Rundown: Tom Cruise going to see Tenet will someday be a lovely scene in a Tom Cruise biopic; how to put Mark Duplass’ indie film advice to work; Bella Thorne says she’s earned $2 million from OnlyFans while researching a possible film. Plus: I recommend Tesla.

Demystified: The latest episode of Demystified, from our friends at Studiofest, opens with Mark Duplass’ advice for indie filmmakers at SXSW in 2015: “The cavalry isn’t coming.” Chances are, no rich executive is going to swoop in and give you a million dollars. So how do you do it yourself? This is how:

Tom Cruise Loves Tenet: There’s something poignant, dutiful and above all cinematic about a masked Tom Cruise taxiing to a London multiplex on a rainy day and pausing in front of a Tenet poster to declare hopefully, “Here we are. Back to the movies.” Here is a boss showing up to do his job, when everyone knows the company is struggling. “Great to be back in a movie theater, everybody,” Cruise said as he left the screening. “I loved it.”

The OnlyFans Project: Former Disney star Bella Thorne, 22, says she’s made $2 million in a week on OnlyFans, and hopes her research may evolve into a film with Tangerine and The Florida Project director Sean Baker. Baker declined comment. It sounds like this won’t happen for a long time, if at all. OnlyFans is a subscription social media platform that often includes sexual content, but Thorne stresses that hers has no nudity. She told the Los Angeles Times she plans to spend the earnings on her production company and charity.

Sorry, Roman Polanski: The Academy of Motion Picture Arts and Sciences denied his request to be reinstated, Variety notes. The director fled the United States in 1978 after pleading guilty to unlawful sex with a minor.

Recommendation: Michael Almereyda’s Tesla is a wild, tragic, charmingly experimental reimagining not just of Nikola Tesla’s life but of how to make a biopic. It leans into the artifice of fake sets and anachronisms, but strikes at the real tragedy of how money ruins everything. Just when you think, “How can this movie possibly end?” it extinguishes in a glorious sad shimmer of song. Ethan Hawke as Tesla and Kyle MacLachlan as Thomas Edison are at their best, but Eve Hewson steals the whole thing.

Movie News: The Thing Returns; Texas Chainsaw Troubles; Berlin Cuts ‘Actors’ and ‘Actresses’
‘The Cavalry Isn’t Coming’ for Indie Film. So What Do You Do?