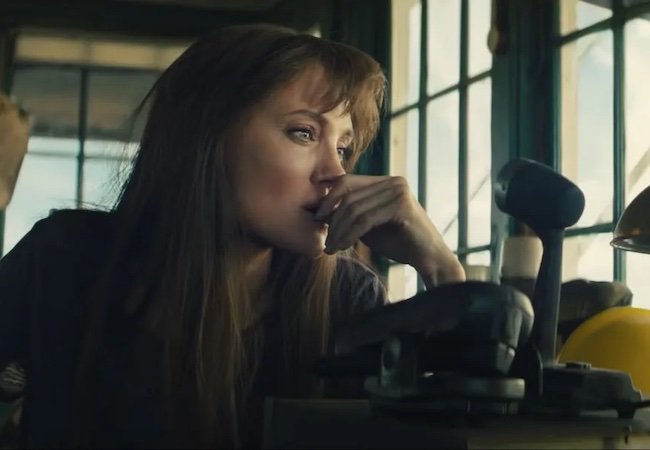 Those Who Wish Me Dead is a smokejumper vs. assassins thriller that finds Angelina Jolie trying to rescue a boy with a secret — specifically, a MacGuffin of a secret that propels the entire film forward.

We love a good MacGuffin — loosely defined, of course, as a storytelling device that gets the plot in motion, but has no other real purpose. The gold standard of MacGuffins is the briefcase in Pulp Fiction — we know it’s important and that people will kill or die for it, but we don’t know what’s in it and aren’t too fixated on that fact. All we need to know is that it’s really important.

The MacGuffin in Those Who Wish Me Dead is some evidence of serious malfeasance that could bring down governors (or so we’re told) and ends up in the hands of a young boy named Connor (Finn Little), who is lucky enough to cross paths with brave smokejumper Hannah Faber (Jolie).

What is the secret he’s keeping? Again, all we need to know is that it’s really important.

Or is that all we really need to know? In the latest Low Key podcast, we talk about, among other things, whether the Those Who Wish Me Dead MacGuffin works. For some viewers, the believability of everything that happens in the film depends on whether we really believe the MacGuffin is important enough to justify the incredible carnage instigated by a pair of A-list assassins (Aidan Gillen and Nicholas Hoult) — but not  important enough to get their mysterious employers to send reinforcements.

A good MacGuffin requires that we suspend our disbelief, and a MacGuffin with vaguely clearly defined value or consequence is asking for a little more faith from audiences. Your Low Key co-hosts (Keith Dennie, Tim Molloy and me) are split on this episode on whether the MacGuffin — and by extension the entire film — works.

That said, if you’re looking for beautiful shots of large fires, action-packed assassin scenes, and pregnant badasses, then Those Who Wish Me Dead will check all your boxes. The top-notch cast also includes Jon Bernthal, Tyler Perry, Jake Weber, and an especially good Medina Senghore.

Unlike most action movies, the film is centered on characters who aren’t necessarily great fighters, or coated in plot armor. Director Taylor Sheridan signals very early on that the film is willing to kill off anyone, as it starts in a brutal manner and continues to challenge characters at every turn.

It also asks how far you would go to help an innocent stranger… with a MacGuffin.

Those Who Wish Me Dead, directed by Taylor Sheridan, is available to stream now on HBO Max.

The Outside Story Is a Relatable Movie for Introverts — and Everyone Who Went Through the Last Year
Do Kids Still Want to Be in Rock Bands? Absolutely, Say Coast Directors