The Wedding Plan, the second feature by 50-year-old ultra-Orthodox Israeli writer/director Rama Burshtein, is a rom-com with the simplicity of a fairy tale and the ambiguity of lessons from the Talmud.

Like her previous film, Fill the Void, in 2012, it involves a wedding and religious women with dilemmas. Even in the world of cinema, a Hasidic love story—by a member of that community, no less—is an anomaly, if not a curiosity.

Fill the Void, the director’s beautiful first film about an 18 year-old pressured to marry her brother-in-law after her sister’s death, was perhaps the first mainstream film that looked into this closed community. The film also received critical acclaim, including a Best Actress win for star Hadas Yaron at the Venice Film Festival. Burshtein proves that success was no fluke.

The Wedding Plan is about another religious woman, Michal (a funny and poignant Noa Koler) desperate to get married at age 32. Tired after a decade of dating, she yearns for love and dreams of her own Shabbat dinners instead of attending those of her married friends.

Michal thinks she has finally found met Mr. Right. But she notices a certain chill. Sampling barbecue chicken wings for their upcoming wedding, the groom, at her prodding, confesses he does not love her. The wedding is off. But she’s booked the hall, chosen the food, paid the rabbi and set the date. Instead of cancelling, the zesty heroine decides to forge ahead with her wedding plan to be married on the last night of Hanukkah, a holiday of miracles.

The wedding hall owner, a handsome, married man (Amos Tamam) tries to talk her out of it, as do her secular mother (Irit Sheleg) and sisters (Dafi Alferon and Ronny Merhavi). Yet Michal has faith that there will be divine intervention and she will find a groom. Like any modern woman, she’s proactive and works nonstop with two matchmakers to make it happen. This provides for a comical round of encounters with men with sidelocks and beards, some appealing but others also a little nutty, like the man who refuses to look at her because he will only look at his future wife, so she will be the most beautiful woman he’s ever seen.

With the clock ticking and prospects dwindling, Michal makes a pilgrimage to the tomb of Rabbi Nachman to pray for guidance and possibly a miracle. Prostrating herself at the wall, she breaks down and then has a breakthrough when a voice on the other side tries to comfort her, something Michal takes as a mystical sign. The voice belongs to a dreamy, nonreligious Israeli pop singer (Oz Zehavi), who turns out to be a possible but totally inappropriate marriage candidate. (The original Hebrew title of the film was Through the Wall, in connection to this segment, but was changed, according to the production notes, so the film would not sound like a political drama.)

Whether the director intends it or not, there’s a feminist subtext to her films, which makes them even more appealing. Her heroines are smart and make their own decisions. They comply to social and religious traditions, but they chose to follow their faith and they determine who they will marry. Even in Fill the Void, as her family tries to persuade that protagonist to wed, ultimately the decision is left up to her.

Burshtein shares similarities with her fictional heroine. She was a secular Jew until age 27 and then joined the Breslov community, a branch of Hasidic Judaism founded by Rebbe Nachman, the revered leader referred to in the film. She breathes life into her portrayals of that community. At the film’s premiere at the Tribeca Film Festival, when asked about religious constraints, the cheerful Burshtein replied, “Do I look constrained and in a dull place? I enjoy life. I chose that life because for me, it’s right.”

Paula Schwartz, MovieMaker Magazine (MM): Why are weddings so central in both your films?

Rama Burshtein (RB): In my world, to have love, you have to marry. The film is about love, wanting love… I have friends that are not necessarily religious but don’t find love. It’s sad. So it’s not just a question of marriage.

MM: What kind of pressure did you feel to follow up the success of Fill the Void?

RB: It’s impossible not to feel that stress. It’s the hardest thing to make the second film, especially if it’s in the shadow of the successful first one. I think the third project is easier.

My privilege was that I wasn’t 20. I’m 50 and I’m a grandmother of two. And my life is not built on being a filmmaker. It came late in my life, being a filmmaker, so I’m less pressured. I don’t try to put [the stress] aside. Like, if you have a vision of a red carpet, that can really make you not want to write. I just play with it, the vision, and give it time, and see myself on a red carpet, and in time that goes away and I can start writing again. When I go into my studio I don’t think about success. I don’t—I mean I do, because everyone does—but the question is, does it kill you or does it light your life? It lights my life and I deal with it and I was OK to do a film that I feel I was very connected to.

MM: What is your writing process? And how important is it for you to direct your own scripts?

RB: Writing is the part I like most because it’s the creation of the world. So I don’t think I will ever want to do something that I didn’t write, because it’s like a mirror. It’s got to be a combined thing, because it’s the whole vision that I see. The idea sits in my mind for a long time before I write; it could be a year, and then I write very fast. And what I write in the beginning is not far from the last version. It’s more of the same. There are little changes, but not radical.

MM: How challenging is it for a woman in your community to even make a movie? The perception is ultra-Orthodox women can’t even leave the house to work.

RB: That’s a good question because it’s so far away from the truth. In my world, it’s only women doing films. It’s the most feminist thing you’ve ever seen in your life. Women who have, like, 10 kids at home—they do a film every year, out of their own money because nobody’s funding them. They make very different films from what I do; my films are for a general audience. But we have, like, an industry. You’ve never met women like this. They’re the strongest, most talented women. And they don’t fight men, because men are not around in that territory, very opposite from your world. In my world, the art world is a women’s world. 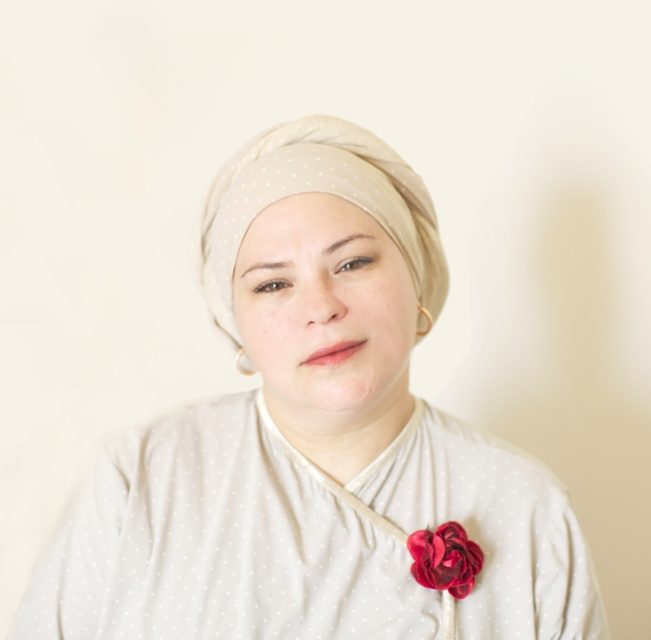 MM: It sounds so feminist, but are you a feminist? Your characters feel like they are feminist but then they have matchmakers help them choose husbands.

RB: No, I’m not a feminist. I consider myself feminine, which is a different kind of power than being masculine, just different.

MM: Are Orthodox women ever forced by their families to marry the men found by matchmakers?

RB: This is a misconception. It’s not true. You’s not allowed to just marry who they arrange. You have to really want to marry, but you can find out if you want to marry faster than in your world. Actions in your world cloud the judgment, I feel.

MM: How long a shoot was The Wedding Plan?

RB: It was a very short shoot. I think it was 20 days. But there were a lot of rehearsals for three and a half months.

MM: Your films so far have been shot in Israel. With four children, how did you arrange this and would you ever consider making a film elsewhere?

RB: I didn’t get the chance to fit in a shoot anywhere else. I live in Israel; it’s easier to shoot in your country. I [devoted myself to] Fill the Void every day. All my kids came to eat lunch with me on the set. That was our time—I didn’t sit with the crew, I sat with my kids for the hour. It was a great hour. This film, only two of them came because two of them are already out of the house. If I have to do a film or whatever here [in the U.S.], they will come with me.

MM: Is your husband supportive of your making films? I read that he was a mohel [a person who performs religious circumcisions].

RB: That’s one of the things he does. I don’t think I could do this if he wasn’t supportive. Right now, I’m here and he’s in Israel taking care of things. He’s very supportive in all ways of thinking. It’s not even a question of secular or religious. Even my secular friends, their husbands are not necessarily as supportive as he is. He watches the film once. It’s very hard for him because he keeps his eyes [averted for religious purposes]… He’s very religious. And he acts in this film, he’s the rabbi.

MM: This is the scene where he sits with Michal and laments, “Counting on miracles— even saints would expect such things.”

RB: And he’s telling her that what she’s doing is not [correct] and that she shouldn’t set her heart on a miracle. That it’s not the way to look at things. That’s my husband. He helps with my energy and connection on a film.

MM: Talk about the suspense in the film regarding who Michal will marry. Compared to the warm, inviting glow of Fill the Void, shot by Asap Sudri, this movie is jumpier. In some scenes it appears the DP, Amit Yasur, is operating the camera. Was this a Dogme 95 thing?

RB: I wanted it to breathe. I wanted the camera to pick up on the character’s energy… You feel what she’s feeling because of the way he shot it, through breathing with her, in a way…. It’s very hard to explain in English, Sudri’s ability in this film.

MM: Noa Koler does have an extraordinary energy. And because she’s so independent and sharp, you wonder how she’s going to find a man who can keep up with her. What qualities were you looking for in your lead and where did you find her?

RB: She is an actress in Israel, and everyone knows that she’s very talented but nobody had gambled on her. She’d never gotten a leading role and she’s 36 years old. When I wrote this character, I knew it would be a very big problem to find an actress at that age, because I’m supposed to know all the actresses in Israel already. She’s not a 20 year old just out of school. That wouldn’t have been someone who could make me laugh and cry at the same time.

When I was looking for a lead, one day Noa walked in and auditioned and she broke it from day one. She was able to move me and make me laugh at the same time. She’s a genius! She’s an extraordinary actress! She was different than anyone I’d known. This is a very complicated character. And with all the gorgeous men in the film, would it be believable the rock star would really want her? People around us were not sure she could handle all those gorgeous guys… Today she’s shooting a big part in a big show in Israel, so everything has opened to her at the age of 36.

Symptoms of the Universe: Sarah Adina Smith’s Buster’s Mal Heart Diagnoses the Thinking Behind Conspiracy Theories
Selling With Soul: Why Make A Spec Commercial? It Could Be The Career Calling Card You’re Looking For