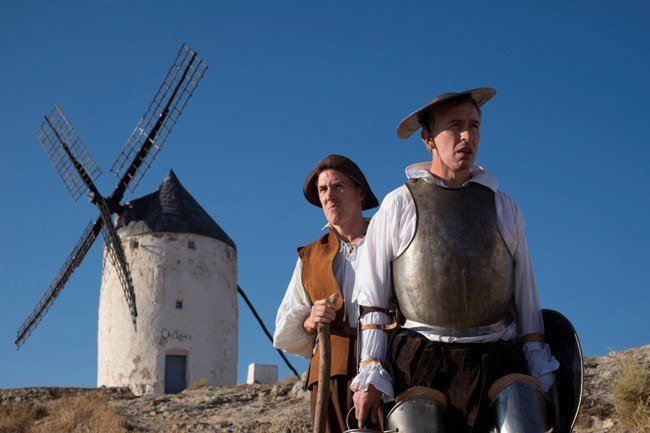 There’s an odd, enjoyable predictability to The Trip to Spain, the third of Michael Winterbottom’s Trip movies—the first two of which began as six-part television series on the BBC, while this one aired on Sky Atlantic.

Steve Coogan and Rob Brydon, playing what the director calls “comic mutations” of themselves, take a road trip together under the pretense of writing about their experience for some publication. They visit historic sites, dine in spectacular restaurants large and small, and—the series’ raison d’etre—talk. Talk, talk, talk. About their lives and careers, about show business and women and literature, from Don Quixote to George Orwell to Laurie Lee’s As I Walked Out One Midsummer Morning.

As anyone familiar with the movies knows, they don’t always use their own voices. The British comedians engage in a persistent, friendly-ish competition as impressionists, giving dueling versions of such figures as Michael Caine (of course), Mick Jagger and David Bowie. (At what is perhaps the new film’s meta apotheosis, Brydon imitates Jagger imitating Brydon imitating Michael Caine in the earlier movies.)

As with The Trip (2010) and The Trip to Italy (2014), with the exception of one or two fantasy sequences, the whole movie feels captured on the fly. There’s an ease, a lightness to the presentation, but the melancholy that pervades The Trip to Spain makes it increasingly clear that the series’ true subject matter is aging and death. As Brydon muses to Coogan in The Trip to Italy, “Don’t you think everything’s melancholic once you get to a certain age?”

Winterbottom and Coogan have had a fruitful six-film collaboration over the years. It all began with Coogan starring as real-life TV presenter and record label owner Tony Wilson in Winterbottom’s 24 Hour Party People (2002). The film was a breakthrough—certainly for Winterbottom, but especially for Coogan, who, while famous in the U.K. for playing dimwitted talk show host Alan Partridge, was relatively unknown stateside. The fourth wall-breaking film and Coogan’s outsized performance were revelations.

Winterbottom says he asked Coogan if he wanted to play the role before the script had even been written, seeing parallels between Wilson and Coogan. In addition to being Manchester-bred Catholic schoolboys, the director says, “They had this thing about them where people were quite happy to slag them off.” Winterbottom remembers that New Order bassist Peter Hook described the performance as “the biggest cunt in Manchester being played by the second biggest cunt in Manchester.”

“Steve, at that time, was quite cocky,” Winterbottom observes.

In person, Winterbottom’s demeanor seems to give insight into how he works. He seems barely able to sit still, and talks at a breakneck pace. On the phone, Coogan is smoothly charming, the type of interviewee who sounds engaged even when answering questions he must have answered dozens of times before.

“When [Coogan and I] were talking about the script for 24 Hour Party People, we talked about [Laurence Sterne’s 18th-century comic novel] Tristram Shandy being a kind of role model of how to tell a story, and having someone talk directly to camera,” says Winterbottom. His inventive 2006 adaptation of Tristram Shandy, entitled A Cock and Bull Story, came about, in part, he says, because he “couldn’t think of anything else” but to work with Coogan again.

Some bad weather on that set led to the discovery of the comic chemistry between Coogan and his co-star Brydon. Coogan: “We were rained out one day and sitting in the make-up trailer. Michael said, ‘Hey, let’s shoot something. You guys talk to each other, and I’ll just shoot it.'”

The two bickered about their relative stations in show business hierarchy, and it was clear they were onto something, Coogan says. “Afterwards, he said, ‘Why don’t we do a series of movies where you just talk to each other?'”

It wasn’t easy convincing the two actors. “Rob and I thought that it wasn’t enough,” Coogan explains. “It was too bare.” But Winterbottom persisted. “Michael runs with ideas, even before they’re fully formed. There’s an old adage in show business: ‘Ready. Fire. Aim.’ That’s very much Michael’s approach to filmmaking. It’s like, ‘Let’s go, and we’ll figure it out.’”

While Winterbottom has flirted with both straight documentary and traditional drama in films ranging from In This World (2002) to A Mighty Heart (2007) and The Emperor’s New Clothes (2015), his comfort zone is somewhere between the two formats. “I suppose I like to shoot simply,” he says. “Even though it’s a fictional film with fictional characters, it seems nicer to put them in the real world, rather than have a completely controlled set. There’s a mishmash between elements you’re controlling—whether it’s dialogue in the script or actors acting as the characters—and elements you’re not controlling, like the world around them.

“It’s almost like if you’re in an entirely fictional world, it’s too controlled, and you lose what actually makes people behave the way they do. You can actually understand more if you put them into the world. At the same time, in a traditional documentary, you don’t get that sort of intimacy with your characters.”

While Coogan and Brydon had worked together before, they didn’t know each other well when they filmed the first Trip. They’re better friends now. A lot of the pair’s bickering in the newest movie centers on Coogan’s newfound success as a screenwriter. He was nominated for two Oscars in 2013 for Philomena, which he co-wrote with Jeff Pope and produced, and much of the comedy stems from the Coogan character’s perception that he’s not being taken as seriously as he should be. “We try to take into account what’s really happening with their lives,” says Winterbottom. “Steve’s Oscar nominations really are important to him. It’s the same rivalry and sniping as before, but it’s a slightly different character moment.”

Rob Brydon and Steve Coogan are the bickering, food-loving English comedy duo at the center of the Trip series

I feel compelled to ask if Coogan was worried that people would mistake him for the vain, self-obsessed “Steve Coogan” he so often portrays. “No, not really,” he replies. “When you do comedy, you have to look like a fool to make people laugh. People want people to like them and think that they’re nice people, cool and interesting. When you divest yourself of that it kind of liberates you. It’s easier in a way to use the things inside you that bug you. One of my favorite movies is Michael Caine’s Alfie. I use it often as a touchstone, because [the viewer] thinks, ‘I don’t like this person,’ but eventually you find some compassion for this dysfunctional person, and that’s always really rich.”

The Trip to Spain started with a mere six-page outline written by Winterbottom. You’d think that editing the copious amount of improvised footage would be the most challenging aspect of the films, but Winterbottom said that for this one, location scouting was particularly arduous: “We drove through a lot of different routes. The process of actually finding the restaurants was hard. What the characters talk about depends on where they go.” He had a specific endpoint in mind: Andalusia. “I knew we wanted to get down to the south, and deal with Islam and the way the Moors controlled Spain.”

The setting allowed them to make trenchant allusions to Lee, Orwell and Cervantes, which fit in nicely with the Coogan character’s haughty literary aspirations. Fans impressed with the actors’ erudition may be giving them a bit too much credit, however. Per Winterbottom, “All that stuff is in the original outline. Steve and Rob don’t do massive amounts of research themselves. I have to try to make them look better informed than they really are.”

A rough sketch in place, the shoot commences. With Winterbottom, “you never have to hit a mark,” says Coogan. “You never have to find a light. He doesn’t allow makeup or wardrobe on set. The camera can move around at any point. There’s no ‘safe’ place to stand. He lets you, more or less, do what you like.”

Coogan clearly enjoys the freedom this approach allows. “I feel very secure with him, doing things that are perhaps riskier, because I think he’s a genius, and I love the way he works. It’s like playing. It feels like I’m just hanging out with a friend, and the camera happens to be rolling.”

This is not to every actor’s taste. “You need to be very comfortable with chaos. Whenever guest actors would appear who haven’t worked with Michael before, I have to reassure them and say, ‘Don’t try to figure out what’s going on. Just go with it, and it’ll make sense in the end.’ If you’re used to working in a more structured, disciplined, orthodox way, then you will be thrown by it. But once you get into a groove… sometimes I wouldn’t even know where the camera was. He’d go, ‘It’s over there. There’s another one over there.’ ‘Oh, OK.’ Sometimes they’d tell me after we’d shot the scene. It feels very alive.”

Brydon and Coogan’s personas in the series are “pretty similar to them, though obviously exaggerated,” says Winterbottom

Besides Coogan and Brydon’s impersonation one-upmanship, the series is famous for its food porn—this time, it’s especially seafood-heavy, from restaurants like Txoko in Getaria, the Michelin-starred Etxebarri near Bilbao and Parador de Almagro in La Mancha. “We like the restaurant being open,” says Winterbottom. “It’s a very different rhythm when you’ve got a real restaurant open. It’s better when there are real people there. It’s funny how things like background noise at a restaurant changes how you behave. It gives [the actors] a bit more energy. Whereas in a completely dead space, where everyone’s just miming extras, if you’re not careful, everything gets a bit flatter and it’s harder to keep it going.”

“We try to be as small as possible, because we’re trying to insert Steve and Rob into real places. With meals, we have two cameras at least, sometimes three. This one, we shot on mainly Arri Alexa Minis. Before, we used Arri Alexas.”

Winterbottom wanted to juxtapose the intimate conversations between the two men and the vast landscape of the Spanish coast. “We had a drone for the driving stuff, to get out and wide. One of the great things about Spain is it is this big, empty country. You’ve got the two of them enjoying each other’s company, and arguing about things, and worrying about their careers, and then you cut back to the scale of the dinosaur [sculpture outside the Jurassic Museum of Asturias], or the empty landscape.”

Those moments heighten the melancholic feeling of the movie. “I think those switches make you feel the smallness of them in relation to other things,” says Winterbottom. “When it’s busy and noisy at lunch, there’s a sort of energy and life in that. And then there are moments when you see Steve by himself. No matter how ambitious and bold and adventurous, when you end up back in your bedroom by yourself, it is a little bit sad.” MM

The Trip to Spain opens in theaters August 11, 2017, courtesy of IFC Films.

Spinning Glass: Destin Daniel Cretton’s The Glass Castle Revolves Around a Family Life Both Romantic and Unbearable
Breaking Down Your Script? Follow These Steps to Mark and Tag Your Way Through Pre-Production (Video)