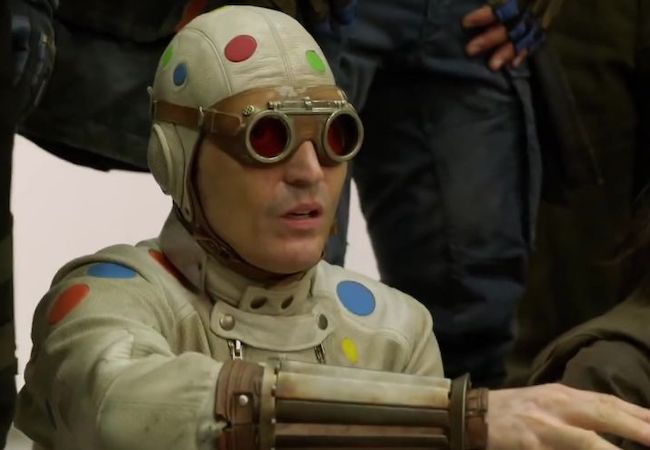 “I love old war movies, I love old war caper films like The Dirty Dozen or Where Eagles Dare,” Gunn says. “So being able to put super crappy supervillains in those situations was a lot of fun to me.

But what makes a crappy supervillain crappy? Why does The Joker (gaudy suit, bad dye job, weird makeup, no powers) scare people — while King Shark (exactly what he sounds like) is relegated to hanging out with other Z-listers in Gunn’s latest film, The Suicide Squad?

We asked Gunn how he defines crappy in the latest MovieMaker podcast, which you can check out on Apple or Spotify or above. Suicide Squad is about a team of outcast supervillains sent out to complete dangerous missions to shave time off of their long prison terms.

Some, like Harley Quinn (Margot Robbie) and Bloodsport (Idris Elba), are cool. And then there’s Polka-Dot man, played in the film by David Dastmalchian, whose super power is the ability to produce polka dots and turn them into weapons.

“I mean, naming yourself Polka-Dot Man, you’ve got to have a problem with you,” Gunn explains. “Like, the first time he makes his costume, there’s probably guys you go to — the high-end guys who make superhero costumes, the low-end guys — he probably goes to the low-end guy. And he puts it on and he looks in the mirror and he’s like, ‘That is cool. I’m the next Batman.’ That’s what he thinks, right? Polka-Dot Man thinks he’s gonna be a hero at first.”

“I think that it’s the lack of self-awareness, which is sort of beautiful, because it’s like a lot of us. A lot of these guys are doing things they think are cool. I mean, Peacemaker and Polka-Dot Man and Javelin, those guys think they’re super cool, but they’re all kind of goofy,” Gunn says.

He also explained which members of the team are actually, in their own way, not crappy.

“Bloodsport is scary,” Gunn says. “He has a creepy costume. And he kills people for money. I wouldn’t want that guy to be coming through my house with his weird sort of skeleton face. … He’s not crappy. He’s pretty good at what he does. So is Peacemaker. Peacemaker’s great at what he does. He’s just an idiot.”

Gunn is such a fan of Peacemaker’s particular brand of idiocy — he violently loves peace — that he’s making a Peacemaker spinoff series with Peacemaker actor John Cena. It is due out next year on HBO Max.

And then there’s Harley Quinn.

“I mean, to me, Batman is probably the greatest DC character and Harley Quinn’s the second-greatest DC character,” says Gunn. “And I love the character. I love the way that Paul Dini wrote her originally, and I thought this was an opportunity to take the character and take the essence of who I thought that character was from the early animated films and the early comics and really just let her live in her full, all-out lunacy and power, and give Margot Robbie, who I’m a huge fan of—I was a huge fan of before I made the movie, I’m an even bigger fan of her since working with her—give her a chance to really stretch her wings a bit with the character. And simultaneously see some facets of her that maybe we haven’t seen before.”

The Suicide Squad, written and directed by James Gunn, is in theaters and on HBO Max on Friday.

Top Secret UFO Projects on Netflix: Are Aliens Trying to Stop a Nuclear War on Earth?
Cocaine Cowboys on Netflix: What Happened to Sal Magluta and Willy Falcon?