The Scariest Scene of All Time: Spring Directors Aaron Moorhead and Justin Benson 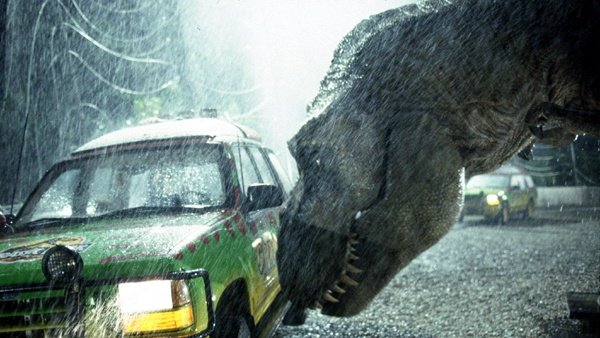 For MovieMaker‘s 2016 Guide to Making Horror Movies special edition, we set out to identify what makes some of the scariest scenes of all time quite so terrifying.

So we asked a few fright-meisters to share their personal picks for “scariest scene of all time,” and try to explain why those moments were so effective. We’ll post one response every Friday in the weeks leading up to Halloween. Today, the co-directors of the horror-romance feature Spring, Aaron Moorhead and Justin Benson, dredge up their deepest cinematic fears.

Aaron Moorhead: “Because dinosaurs did exist, and could exist in the here and now, the T-Rex attacking the children’s Jeep in Jurassic Park gets me at a conceptual level. It’s topped off by masterful craftsmanship by Spielberg: the rain, the darkness, the incredible size and power and malice of the T-Rex hiding in the shadows, its absolute dominance of the situation and the characters’ helplessness. It gets broken up by a minor joke of the T-Rex biting the tire of the Jeep, reminding you that you’re in the real world, not dealing with a self-aware monster but rather a big dumb animal, which on a primal level just seems to work even better.”

Wake in Fright, the 1971 Australian thriller by Ted Kotcheff

Justin Benson: “My most recent memories of feeling something that I could at least loosely define as scared would be films that some purists argue are not actually “horror:” Kill List and Wake in Fright. Both of these films deliver a constant, extremely effective feeling of dread. I walked away from both feeling a bit shaken and even dirty. Pretty sure Wake in Fright made me stop drinking beer for a night or two. And the supernatural component in The Exorcist actually does creep me out. I think it’s because whatever the mysterious evil force is, it feels universal—it doesn’t rely on being raised within a particular religion or culture for it to resonate in a wonderfully unnerving way.” MM

Spring is currently available on VOD, courtesy of FilmBuff.

Sticking it Out, Winning Big: Ben Mendelsohn Comes Up Aces Again in Mississippi Grind
The Two-Hour Take: Sebastian Schipper on his See-it-to-Believe-it Victoria