How They Did It: Capturing the Outback for The Rover 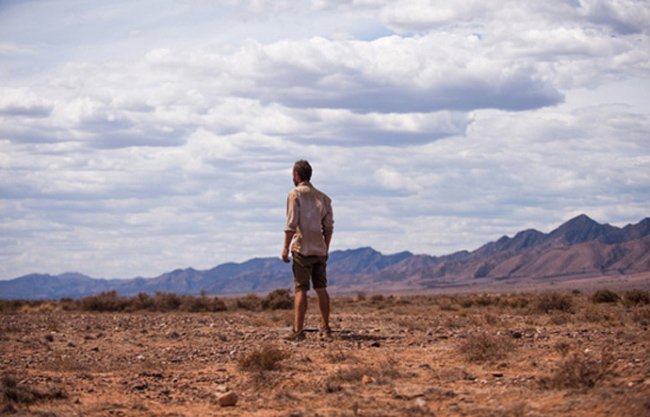 Hot off the press, from our Summer 2014 issue: How Natasha Braier, the cinematographer of the dystopian thriller The Rover, harnessed the punishing heat and scarred landscape of the Australian outback.

Before I met with director David Michôd for the first time on set, we sat down and talked for 10 days, going through the whole script and talking about character, mood and atmosphere—concepts underlying the narrative. By the end of these talks we arrived at an emotional landscape, and I came to conceptually understand the world of The Rover that David wanted to portray. The world of The Rover is not a world of beautiful sunsets: it’s the hostile side of the desert. We didn’t want to beautify the place, so we avoided magic-hour moments in the mesmerizing Flinders Ranges, the largest mountain range in South Australia.

Braier with ARRICAM LT on set of The Rover

A World on Fire

The heat and the wind were the biggest challenges. Shooting in 45 degree Celsius (113 degrees Fahrenheit) heat required a lot of precaution. When you’re shooting in so much heat, with so many flies, both the heat and the flies become part of the narrative. All of our faces were full of flies. At least the suffering has the reward of showing up in the film.

We were in the middle of nowhere in the outback, very far from any major city that would rent lights, so we had a basic truck for the whole shoot with two 18Ks and two 6Ks. We had to clean the lights every day because the ballasts would get so dusty. Sometimes we lost lights because there was just too much dust, or the heat would kill the ballasts. On our first or second day of shooting, the generator overheated and we lost the lights for half an hour while it cooled it down. The light in the interiors was always bounced; indirect light in dark rooms, in contrast with the over-exposed sunlit exteriors. I looked for strong contrasts with the interior lighting, with shadowy areas fading to black and high contrast in the faces, but always with soft light.

Our film stock had to be protected, too. It could be up to an eight-hour drive to Adelaide, the city from which we could take a plane to Sydney and get our film to the lab. Whenever the driver stopped for coffee or lunch in the middle of the journey, the air conditioning had to be on so the film wouldn’t be ruined.

Guy Pearce and Robert Pattinson surviving the desert in The Rover

Corrugated iron was one of the main textures in our palette. We over-exposed the exteriors to accentuate the feeling of heat and desaturate the colors, losing the blue in the sky and making everything feel even drier and hotter. The very specific color palette was inspired by the earth tones of the desert and the green of the bush—browns, yellows, greens. The only touches of red in the movie are either blood, or representational of China, as much of society in this future are Chinese immigrants. Blue represented water—or the lack thereof. There is a small patch of the color in almost every shot, whether a pen or a chair. Guy Pearce even asked us at one point, “Hey, what’s going on with the blue?” He noticed that just as we were about to shoot, we would run and put a blue cushion somewhere. It’s the subliminal presence of water—the desire for water—so that you would feel this need, but not have enough.

Despite not wanting to shoot during magic hour, we did have one scene with very low sun in the late afternoon, which was intentional—when Guy is cleaning Robert [Pattinson’s] wounds. If there is such a thing as a love story between the two characters, then that would have been their moment, when they get closer to each other. That was their romantic scene in the movie.

Drifters in the Desert

This is a road movie; we were actually moving through the spaces. Sometimes the locations were five hours from each other, so we would begin in one place and then start driving north. Sometimes we finished in one location and the following day were in another location two hours away. That meant that at the end of my day I couldn’t check how the walls were being painted in the next set, or what was happening with the colors and the textures—a challenge, because on any other movie you would have time to go visit the next set to prepare. That was also challenging for Jo Ford, the production designer, because she sometimes had to be on one set where we were filming and at the same time she needed to be somewhere two hours away. I used Artemis to help with this. It’s a viewfinder app that allows you to use the camera on your iPad or iPhone during prep to simulate specific cameras and lenses, so you have an exact reference for what you will see on the day.

The train scene, where Guy and Rob’s car stops by railway tracks to let a long train pass, was tricky as well. There was only one train a day and we didn’t have any control over it. They would only slow down their speed 30 percent for us so the train could be captured for a little longer, but that was it. The train could pass by any time between 6:30 and 9 in the morning, and it would take around five minutes if it was fully loaded with containers. In order to capture all the shots we needed, we had to move very fast—with only two cameras and two mornings to get it.

A visual motif we incorporated into the film was a downward motion, of falling, and we conceived of it in two layers. One was the literally run-down nature of the sets, which I worked on in collaboration with Jo. We thought of places like Cuba or Detroit that got stuck in time, looked at photos of abandoned places, tried to think what these locations would be like in 10 or 20 year’s time, after the collapse of society. Walls that haven’t been painted in years; the same cars that have been kept running for decades. We used some sets from our locations but completely transformed them, just using their skeletons. Then we would stop—as if everything had stopped…as if there were no more workers, no more anything, as if it were all deteriorating.

The other visual strategy was bringing the center of gravity down low, to the floor. There are many moments in the film when people are at a lower level than usual, sitting or laying on the floor. We were trying to bring everything down, return everything to basics, back to the floor level—to express that humanity had returned to zero, back in survival mode, close to the earth.

The End of an Era

The Rover has the feel of an epic. We shot with an ARRICAM LT with Cooke S4 lenses on Kodak Vision3 200T and 500T. I originally wanted to shoot only on Cooke lenses, but then realized that something like 30 pages of the action happened inside cars, and that Cooke was not the most practical thing for us in those conditions.

All the visual choices were made in camera, as if we were still going with the old standard lab process for grading. There was the option to shoot 35mm, so of course I took it—I always shoot on 35mm if I have the choice. It’s easier to shoot, more beautiful and more efficient; I learned shooting on film, so I’m always going to love film more than digital. The contrast in the desert is harsh, and 35mm took it better than digital. We were the last film to be developed at the lab we used in Sydney. The Rover may be my last 35mm. MM