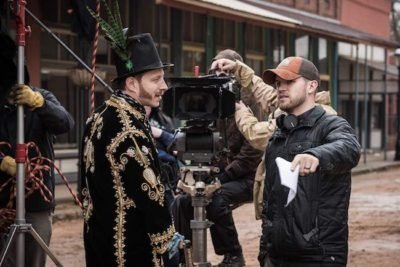 Nearly 120 years ago, the zestful border town of Van Buren, Arkansas found its streets lined with eager curbside merchants, freshly butchered meats hanging in plain view, and livestock on display for purchase or pulling any number of conveyances.

A lively Main Street sat buzzing beneath a towering cobblestone bank and boasted an inviting opera house at its center with a French-inspired train platform, the town’s portal to the expanding world, directly in view. Last fall, the residents of Van Buren were able to experience their own Main Street with this same vibrancy of an era long past.

I believe every storyteller draws inspiration from what they know or have experienced. I also believe the best characters you’ll ever write are those that you’ve met somewhere, at some point, in your own life; whether directly or indirectly. And, along the way, I’ve realized that not every character you create will be tangible. I know the history of Van Buren fairly well, given that I spent the first twenty-two years of my life there, and to bring in an entire crew for a feature film was actually a dream that I’ve had many times before.

Personally, as I grew up, I loved spending time in all of the historical buildings and museums in which my hometown took so much pride. In fact, elementary school is when I sat in the exact opera house I based the story on for the very first time. I didn’t enjoy the education so much as I did sitting inside and picturing what those walls had seen over the past 100 plus years. This not only created a longing inside me to experience life in a different decade, but it introduced to me the character I saw as the heart for what would later become The Riot Act.

The Riot Act is inspired by events that actually unfolded on Van Buren’s iconic Main Street; a murder motivated by fatal attraction and the coinciding defiance of societal norms that left a stain across much of our small town’s history. So, when pre-production began, we naturally made it our goal to film exclusively in the original locations that lent to the story’s veracity.

Shooting an independent feature (on an independent budget) in a time period that demands attention to every detail obviously required certain breaks in spending. We would only be able to accomplish this huge task if given generous access to the elements that lent to the true story from The Riot Act’s inspiration.

We needed the collaboration and permission from city officials to shut down their entire Main Street, the crown jewel of its tourism, and allow a whole crew to remove street signs, stoplights, and local traffic for several weeks. Not to mention dump several tons of dirt across five city blocks, as well as gain access to/outfit numerous interiors that would interrupt business hours and daily functions.

It is because of this that the town in this story became more than a location, it is instead one of those intangible characters I mentioned earlier. The Main Street we were able to create embraced the period around the turn of the century and carried with it the framework of an emerging country with moral, economic, and technological infancies. Therefore, it was important to me that the landscape remain consistent with the town I grew up touring, one born of the industrial revolution rather than the typical, “Old West” town some might assume to be the backdrop of this era.

Parks worked with his art department to conceal anything from the modern era. Image courtesy of Giant Pictures

Hollywood has taken notice of Van Buren’s iconic Main Street before with productions like The Blue and the Grey and Frank and Jesse, but not since 1994 and never to the extent I was wanting. The state of Arkansas doesn’t offer much in assistance to independent films, but it also doesn’t meddle in your operation, either (no necessity for filming permits). Therefore, everything we wanted to do consisted of coordination with local officials. Early in the process, they saw value in showcasing their pride and joy of authentically restored history, while also helping a Van Buren native attempting to shoot a large-scale production.

The planning of our Art Department consisted of three major tasks: covering anything modern with appropriate alternatives or replacements, implementing the design of the picture, and phasing in as many original elements from the venue’s history as possible. Our Production Designer, Emily Parks, unearthed rows of original seating and curtains from storage at the King Opera house that would be used in later scenes; a pine plank stage floor was installed and stained and period-style footlights were handmade. At the historic Clayton House in Fort Smith (built in 1882), original lighting was used and additional fuel lamps and period-appropriate furniture and hand props were sourced. In Paris, Arkansas the design team restored a wing of the abandoned Old Smith Hospital (built in 1905 and abandoned in 1975). Deteriorating paint was scraped from doors and walls and matching colors were reapplied, floors were scrubbed and polished, and original furnishings, linens, and medical equipment used during original operation were sanitized for use as props and dressing.

Instead of hiring an independent crew to handle the dirt overlay, we worked with the city’s street department to cover the five blocks of Main Street with the appropriate mixture of dirt and sand for appearance and functionality. We implemented additional local outreach for picture vehicles (all horse-drawn wagons with willing owners) and hired a team of experienced local horse wranglers. We also coordinated with the Arkansas and Missouri Railroad to gain access to a crucial section of track for a day as well as inside one of their antique train cars. In a town that prides itself on antiques, it isn’t too hard to search for whatever picture vehicle, dressing element, or hand-prop you might need for a given day of filming.

As you can see, coordination took significant time and called for significant relationships to be built as well. As shooting progressed, we were able to work with officials to take up and re-lay certain areas of dirt, and close and re-open certain sections of highway to accommodate normal functioning of the town. During off days, we even opened certain sections of the set for locals to shop and interact.

The financial difference at this stage is invaluable. The true cost of what would have come back to the production would be close to if not higher than the entire budget of the film. However, the effort and care lent from the people and community of a town, rich and proud of its deep historical roots, helped us bring life back to that era if only for a short time in a way that may never be witnessed again: especially on an independent film budget.

Devon Parks and team worked with the city to cover the streets with a dirt and sand mixture of that period.

We opened production at the Paris Hospital, which stands as a prime illustration of my vision for this film. To get to set, you had to walk through a busted old doorway and down a hallway of chipped paint, glass, and rusted medical cabinets. Pushing through thick double doors, you were welcomed by an identical wing of this hospital as it existed in its prime in 1905, interrupted only by crew members working hastily.

From idea to script, from script to edit, and from edit to screen, a film evolves organically and individually as result of every surrounding influence. It was a goal of mine to create on screen an immersive experience that seamlessly connects our audience with this past environment and characters alike.

In this regard, our influences came from the natural history that lived within the walls and on the facades of the sets we were shooting. It came from standing on the exact brick platform where the blood of a young actor once pooled on a similarly cold winter night in 1901. And it’s this very story that prompted a cast and crew from around the world to converge on a small historical town in the South to rekindle a forgotten overtone in iconic history, still standing today. MM

Eddie Murphy Loves Dolemite, and This Story Shows How Much
Midnight Traveler: a Family’s Phones Document the Refugee Crisis