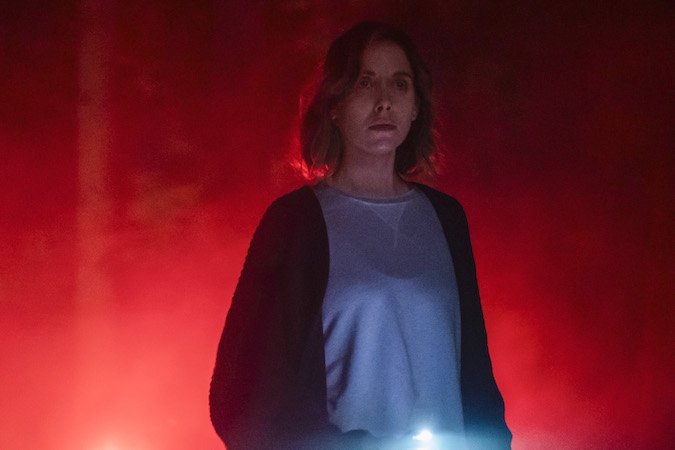 The new trailer for The Rental, the terrific directorial debut for Dave Franco, finds a couple played by Alison Brie and Dan Stevens heading out of town to a woodsy, oceanside getaway with another pair played by Sheila Vand and Jeremy Allen White. What should be a pleasant weekend away quickly turns sinister.

The two couples become suspicious that their host (Toby Huss) may be spying on them, and the friends try to keep secrets secret as they wonder desperately who to trust. Franco keeps everything very emotionally grounded, even as he wincingly raises the stakes.

If you like slow-burn horror, this is one for you, especially given top notch acting by Brie (GLOW), Stevens (Downton Abbey), Vand (A Girl Walks Home Alone at Night) and White (Shameless).

Also, if you’re in the Los Angeles area tonight, you can watch a special screening of the film at the Vineland Drive-In, featuring a Q&A with Franco, who also co-wrote the film with Joe Swanberg, and castmates Brie, Stevens, Vand and White.

The Rental drive-in date continues IFC Films’ shrewd and nostalgia-tinged embrace of drive-in theaters in recent months, especially to promote The Wretched, a horror film about a witch next store that turned into a surprise hit and gained instant cult status thanks to the turn-off-your-engine set. IFC Films’ Sundance film The Relic will also get a drive-in run next month.

Franco is best known for films including Neighbors and The Disaster Artist, and was recently seen in Netflix’s 6 Underground and in Swanberg’s Netflix series Easy.

Brie recently starred in Horse Girl, which she co-wrote, and which debuted to strong reviews at Sundance. You can listen to our interview with Alison Brie and Horse Girl director Jeff Baena here.

The Rental, directed by Dave Franco, opens in theaters and is available on VOD July 24th.

Da 5 Bloods and Cross-Generational Trauma (Low Key Podcast)
How I Fought a Life-or-Death Battle for False Colors, the ‘Budget Bourne’ of My Dreams