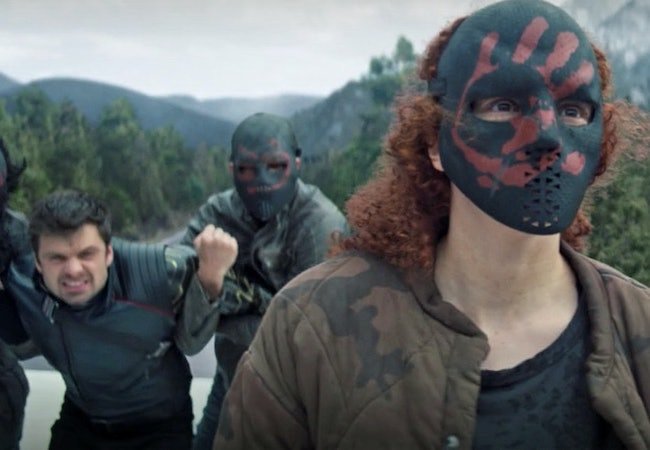 The Marvel Universe has a strange habit it keeps repeating, including in The Falcon and the Winter Soldier: Giving good messages to the wrong messengers.

Karli Morgenthau, the Falcon and the Winter Solider antagonist played by Erin Kellyman, continues a tradition of a villain who embraces good ideas. She wants refugees to be respected and cared for, and for all humanity to unite, which sounds nice. But her message is undercut by her violent tactics and casual approach to murder.

Don’t Miss a Thing: Take 10 Seconds to Sign Up for Our Newsletter

We saw this before with Killmonger in Black Panther — the Michael B. Jordan character was right that Wakanda should intervene for struggling people all over the world. But his willingness to kill innocent people made him a terrible representative of that idea.

And of course there are large sections of the Internet devoted to the idea that Thanos did nothing wrong. We have to disagree, but he had a point about the dangers of overconsumption — even if his solution was horrendous.

These are just a few of the ideas we discuss on the latest Low Key Podcast, which jumps around the world of entertainment from The Falcon and the Winter Soldier hijinx to Oscar 2021 impressions. But first, we offer some thoughts on Mortal Kombat — seriously, why is Cole even here? You can listen on Apple or Spotify or above.

Unlike most weeks where we cover a single show or movie, we just had too much to say about several topics to be constrained to a single subject.

The Falcon and the Winter Soldier has received both praise and criticism for its approaches to social issues. Black pain and resilience are at the center of the show through the storylines of the erased, tortured Isiah Bradley and the valiant Lamar Hoskins.

Many are upset by the continued respect and deference to the U.S. military, given its treatment of Isiah. I argue on the podcast that the show handled it as well as a Disney show can, but we talk about why many disagree.

We also talk about Sam Wilson’s hands — and how the lack of them has gotten him beaten again and again since the MCU’s inception.

We close with a conversation about the 2021 Oscars:

The episode is a bit more helter-skelter than normal, which admittedly is saying a lot, but the journey is worth your time.

Main image: Erin Kellyman as Karli Morgenthau in The Falcon and the Winter Solider.

When Bruce Lee Died — and Launched the Bruceploitation Genre