The Making of Roar: Lions and Tigers and Stitches, Oh My! 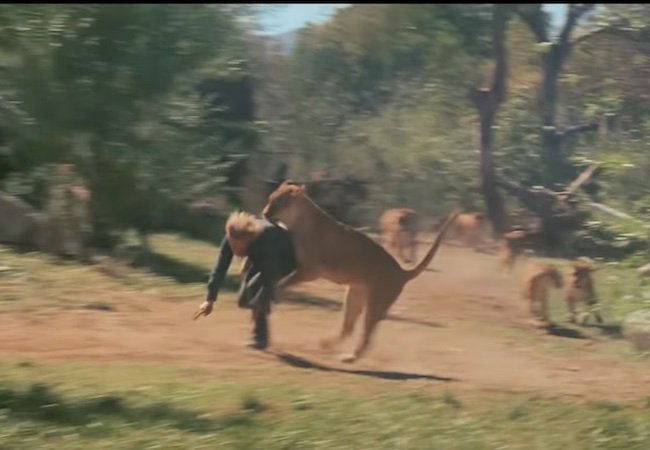 Roar is the story of a family — including Tippi Hedren and real-life daughter Melanie Griffith — stalked by lions and tigers on an African nature preserve. When it was finally released in the United States in 2015 — nearly 40 years after it began its five-year, accident-filled shoot — savvy distribution company Drafhouse Films used the tagline, “No Animals Were Harmed in the Making of This Film. Seventy Cast and Crew Members Were.”

Have we mentioned that Roar was intended as a family comedy?

The making of Roar is the subject of Dan Delgado’s latest episode of The Industry podcast, where he investigates some of Hollywood’s weirdest decisions. John Marshall, one of the film’s stars and the son of director Noel Marshall, is among the Roar veterans who join Dan for a deep-dive on everything that went wrong. You can listen on Apple or Spotify or here:

Roar was a family affair. It began when Hedren and Noel Marshall, who were married, were in Mozambique for Hedren’s film Satan’s Harvest. They happened upon a house overrun with lions, which provided the inspiration for Roar.

Noel Marshall plays Hank, a naturalist in Africa who holds the Joe Exotic-esque belief that humans and big cats can live side by side. That theory is put to the test when his family arrives unexpectedly. Chaos ensues, on and offscreen.

John Marshall received fewer than 60 stitches — not bad by Roar standards. His stepsister, Melanie Griffith, was slashed across the face and needed cosmetic surgery. Tippi Hedren broke her leg and suffered gangrene.

Roar features the cinematography of Dutch filmmaker Jan de Bont, who was lured to work with children and animals by the promise of a green card, years before he would become a red-hot director with films like Speed. He needed so many stitches at one point that John Marshall was certain he wouldn’t finish the film. 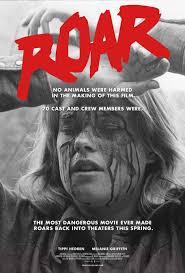 The 2015 U.S. release of Roar capitalized on the real-life injuries to the cast and crew, including young Melanie Griffith.

“I’ve done 50 years of filming, and I’ve never had anything remotely like that,” said camera operator Robert Primes, who spent a few weeks on Roar before going on to a successful career as a cinematographer. “It was crazy. … Nobody had a danger factor like that.”

He described a scary moment on his very first night of filming, when he realized a lion was about to attack either him, or Jan de Bont.

The Dutchman dove to safety, leaving his camera behind, according to Primes. The lion then tore into the camera, which weighed about 100 pounds.

“The muscles in the lion are so strong, that it’s no weight for it,” Primes explains. “The teeth collapse through the magazine, jamming the film — Panavision still has it as a trophy — and it does one of these things where you shake it, to set the teeth in. Which means if there were any kind of a living thing it would be gone.”

None of that was the scary part. The scary part was when the lion dropped the camera — “and looks over toward me.”

He survived, of course. But it wasn’t his last misadventure. At another point, he tried to stop a fleeing lion, and learned the valuable lesson that you can’t stop a lion with your head.

“I made a gesture to try to block the lion with my head, with helmet,” Primes recalled. “Now, I only did that for a second. Because it occurred to me that the lion’s jaws are easily big enough to hold my head. I mean, the lion wanted to decapitate me, it can. It’s got the strength and the size to do it. And I thought, what the fuck am I doing? I’m trying to stop the lion with my head.”

Hedren and Noel Marshall divorced soon after Roar was released. It came out first in Australia, in 1981, and didn’t make it to the United States until the Alamo release in 2015.

But the story has a happy ending, at least for the cats. The set of the movie Roar eventually became the Shambala Preserve, an American Sanctuary Association-accredited animal preserve that Hedren founded in 1983 and continues to lead today.

Here is the 2015 trailer for the U.S. release of Roar. Warning: It contains a lot of charging lions.

Wolfman’s Got Nards: The Monster Squad Deep-Dive a Very Specific Audience Was Dying For
Portland Film Festival’s Joshua Leake on Innovating Through the Pandemic — and Drawing Ideas From Other Festivals