The Long Con: Danny Leiner and Four Other Clowns Make The Young Kieslowski 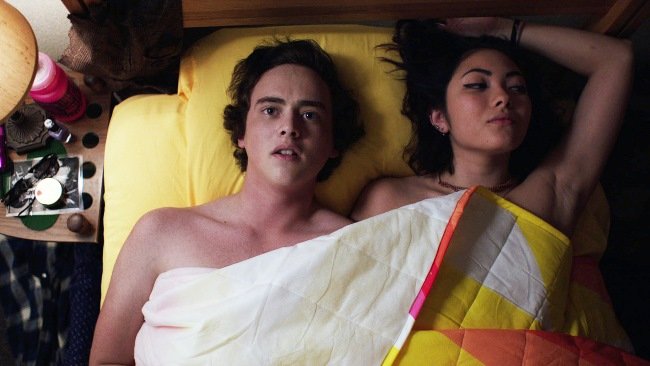 The first time I met Danny Leiner he was not wearing a seat belt. I was a PA on a film he was directing in Austin, and for the moment I was tasked with driving him from some point A to some other point B; the where and why details I can’t really remember and, in any case, aren’t that important to this story.

The real story is that he would not put on his seat belt, and the incessant dinging warning did nothing to persuade him. Instead, he asked me a number of times if I could please somehow turn it off — the dinging, I mean — and that the whole thing was a “fucking disaster.” I kept trying to find new and deferential ways of saying “Of course I can’t reach into the wiring of this car right now, but maybe you should consider putting your seat belt on because this is the 21st century and it’s the right thing to do.” Such was the extent of our first conversation. I can’t imagine he even remembers this. His mind must have been somewhere else — directing a movie is very taxing on the brain. Meanwhile in my mind, I’m imagining all manner of frightful and macabre situations in which I get into an accident and the movie is shut down because the director went flying through the windshield. Maybe more importantly, though, I was thinking that I have to get to know this guy because I loved his film.

After graduating from UT Austin, I spent a summer working intermittently as a tutor, writing a script, and basically lounging around for the other three-quarters of the day. So when a former professor of mine said he knew of a job opportunity, I jumped at it. I interviewed with a duo of casting directors who were prepping a film called Gary the Tennis Coach. It starred a guy they kept referring to as “Sean.” They were in need of a new casting assistant because the old one was about to be fired.

I kept wondering who is this “Sean” guy; should I know “Sean”? Should I have done some research before this interview? More importantly, do I really and truly want this job, wouldn’t my time be better spent writing? Are they talking about Sean Penn? (They weren’t.) So I was doing my best to project enthusiasm and interest, but on the inside I was starting to realize that getting a full-time job would put an end to my post-collegiate lounging career, which I was getting pretty good at.

Mid-way through the interview they told me that the director of the film was Danny Leiner, whose previous credits included Dude, Where’s My Car? and Harold and Kumar Go To White Castle. My whole attitude suddenly changed. My film-school friends and I were into all kinds of art-house-y stuff, but Harold and Kumar was just one of those movies, like The Big Lebowski or Dazed and Confused, that transcended the stoner-film genre.

So I became their assistant. That was not without its ups and downs. After about a month I was politely fired. But luckily, that very day the Production Coordinator called me into her office and offered me a different job on the movie: Production Assistant and Cast Driver. The bad news — her words — was that it “only” paid $550 a week.

It could not have worked out better. I drove cast to-and-from the shoot, but best of all I was a PA on set, locking things down, generally being a gofer. I made myself available for all kinds of tasks. One of the actors in the movie was still in high school and needed help with his calculus homework — and I just happened to have a degree in math. I’d also happened to have played tennis in high school, so whenever a cast-member needed somebody to warm up with, I was the guy. By stroke of luck, my skill sets matched up perfectly with these two odd jobs that arose in the course of shooting, and so I was thought of as a talented PA guy, an impression that I was very careful to do nothing to correct.

Of course on a film everybody becomes close, and I got to know Danny a little more. It turned out his predilection for going seat belt-less was just an idiosyncrasy. Outside of shooting, he was very approachable and laid back. After the movie was over and he went back to LA, I sent him one of my scripts. He read it and liked it — even offered to produce it, but it had already been optioned. A year later I asked him to write a letter of recommendation for me to the USC graduate screenwriting program, and I’m convinced that he was a big reason why I got a fellowship. After I graduated, I sent him the script for The Young Kieslowski, hoping he might direct it, but he wasn’t thrilled with it. A couple years after that, after having rewritten it substantially and finally being in a position to direct it myself, I again sent him the script.

This time he thought it was great and offered to help produce it. He brought Joshua Malina aboard. He secured half the funding. He was on set every day, getting anything that needed to be done, done. He even got coffee for the crew a couple times. There was absolutely no ego. He watched cut after cut and his notes made it better every time. His hard work and connections are the reason this movie looks as professional as it does. The whole experience certainly exceeded my expectations. My previous feature had been shot with just my two film school friends, Ross Putman and David Hunter (also producers on Kieslowski), for $4,000.

But I haven’t told the whole story. I’ve left out the brilliant hagiography of the PSH Collective (Putman Sanga Hunter), which is the slightly more boring tale of three guys from the writing program at USC that just decided to start making a movie, no matter the consequences (the aforementioned $4,000 film, Trigger Finger, which is now available on DVD, if you ask me for it). I’ve also left out Seth Caplan, the other essential piece of the The Young Kieslowski productorial puzzle.

And in leaving them out, I’ve actually neglected to tell perhaps the most important part of the way this movie got made. For as great as it was to have an elder statesman of cinema championing my project, lending his name, talent, and sweat every step of the way, an indie film is impossible without a dedicated army. Ross and Dave are two of my closest friends. Seth I’ve known for almost 10 years, and in making the film we became close friends too. Each of them put their heart and soul into the project, working small miracles with actors, agents, location permissions, festival contacts, legal… the list goes on. To make a film, one needs a group of people who truly care about the project. If you can find that group, and if that group happens to be your friends, I honestly believe nothing can stop you.

Except obviously for some kind of force majeure, like for example a horrific car accident. So for God’s sake, Danny, put on your seat belt. MM