With The Legend of 5 Mile Cave and The Warrant, INSP Films Favors Westerns That Uphold Classic Western Values 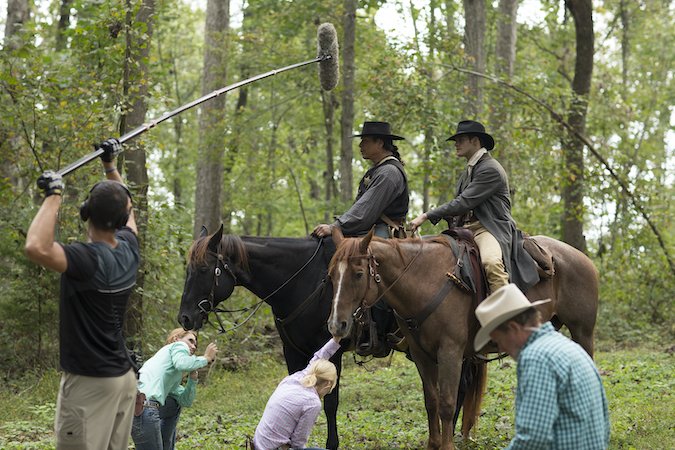 Doug Butts is the head of programming for the INSP Network and an Executive Producer with INSP Films, a network and production company committed to the Western genre. In the feature below, Miller examines the market for contemporary Westerns that favor classic themes of redemption and honor, and what moviemakers looking to make a Western in that mode should keep in mind.

Shying away from dark characters who act out of vengeance, many Western fans value redemptive themes and feel-good endings. They gravitate toward period dramas with courageous salt-of-the-earth protagonists motivated by morality and honor. These are lead characters who are good neighbors but are more than capable of handling disruptors.

INSP Films was born to produce this type of content to a wider audience.

The competition within the Western genre is intense and audiences have high expectations, so it is important for Westerns to be authentic and believable.

When producing a Western, there are countless elements to get right that lend credibility and depth to the project. Focusing on livestock, keep in mind that it’s important to have horse wranglers and an experienced trainer on set at all times. I recommend moviemakers working with live animals, set aside at least one day for your lead actors to spend quality time with their horse and trainer. This can be critical for their comfort and also the believability of the actors’ riding skills for the audience.

Casting quality actors like Jeremy Sumpter or Neal McDonough, both exceptional riders, made a huge difference in INSP Films’ The Legend of 5 Mile Cave and The Warrant respectively. Jeremy could ride over rough terrain at high speeds, and Neal was able to ride his horse while shooting a rifle one-handed. However, some actors could perform their roles well, but were understandably not accomplished riders. Setting aside time for these less-trained actors to get comfortable riding is critical to their ability to craft a believable performance, and it also helps ensure the safety of everyone on set.

When producing a Western it’s also important to allot time and energy to the study of the period and their lifestyles. An astute Armorist can accurately distinguish and provide the correct weapon props for a post-Civil War picture circa 1865-1877 compared to the Frontier/Western battle of the Alamo taking place in 1836. This may seem unnecessarily nitpicky, but rest assured, Western lovers will be quick to point out inaccuracies should you decide to play fast and loose with time periods.

As INSP has studied the response to it’s classic programming and venture into original productions, we have noted a real desire by audiences for action without excesses and relationships without extremes. There is a real market for producing Western content of this ilk, but bear in mind, the genre’s competition is stiff and common elements like horseback riding and accurate period details can be an involved process to accomplish correctly and safely.