The Hook-Up: The Unique, NSFW-ish Research Process Behind Amateur Night 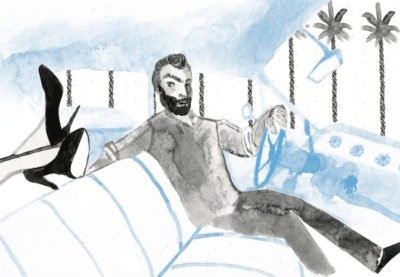 Lisa Addario and I met in college and decided to become partners, first in writing, then in sex, then in marriage.

After graduation, we both took production jobs in NYC with the hope of breaking into the film industry. Our plan was to submit our scripts to the same companies we worked for, often without pay. Turns out, however, that these companies didn’t want to read a script from the guy whose job it was to tug a fishing line and make an actor’s scarf appear to be blowing in the wind (and who got that line tangled around the actor’s neck, and blew the take). We decided to move to Hollywood, in search of greener pastures and more amenable movie execs. Once we were settled between the 101 and the 405, though, we encountered hordes of aspiring screenwriters and film school grads—people who had dreamed of making the next great cinematic classic—who were now prop masters, professional script readers, writers’ assistants, or—worse—junior agents.

We weren’t going to let that happen to us. So we made a pact that we would not take any job in the “industry.” It was better, we decided, to take the dumbest no-brainer jobs possible so we might be viewed as exotic geniuses who happened to also be waiters—anything but a PA.

The screenplay we wanted to write was about hookers, an all-female, Faster, Pussycat! Kill! Kill!-type ensemble film. Not being hookers, we reasoned, in order to make the “write what you know” adage work, we’d have to get to know hookers. In New York, prostitutes on the West Side Highway are as common as pretzel vendors, so we looked for the L.A. equivalent. Santa Monica Boulevard was, at first glance, our Henry Hudson. We quickly found out, though, that
unlike NYC, every woman on Santa Monica Blvd was actually a man, which was going to complicate our concept.

About this time, we were at a party hosted by my not-yet-sober brother’s drug procurer. He mentioned he had to slip out for what we believed was a supply run but soon learned was a side job driving prostitutes to their gigs. We were ecstatic. We begged him to allow us to do a “ride along,” promising to quietly take notes in the back seat and try to be invisible. He shut us down. But he told us where we might find a job like his for ourselves: the back pages of the LA Xpress. We left the party on a mission. Since he lived in a seedy hood, it didn’t take long to locate a copy of the magazine. We flipped to the back, and saw the ad.

Bravado wavering, it took us until the next day to make the call. We both hovered over the speaker phone and a nasally voice said, “You got a car? You got a license? Meet me at KFC. Now.”

I went to KFC. I found a skinny dude in a booth with seven cell phones laid out on the table in front of him. The interview lasted all of 10 seconds.

“Is that your ride?” He pointed out the window to our gleaming 1998 Subaru Legacy Wagon. “Nikki’s at this address.” He scribbled on a napkin.

I called Lisa from the car. Neither of us could believe I was actually on my way to meet a “pro” for a “trick” on this sunny, blue sky California day. That first day, and night, I met “Nikki.” She seemed disappointed, since the job description called for not only a ride, but “protection,” and it was obvious I was ill-equipped to protect her. But there was no one else, and we had six clients ahead of us.

For 12 hours, almost no words were exchanged save for addresses. I learned to park out front, walk her to the door, make eye contact with the client and squint as though, if something went wrong, I’d be breaking down the door using my ninja skills. At the end of the shift, I dropped Nikki at her house in the Valley and she handed me a wad of bills. Several hundred dollars. Twenty percent of the take was the standard rate, and that take would be a lot more on a Saturday night, when we did parties.

When I got home, Lisa was dying to find out all the juicy hooker details I’d picked up. I had almost none, I was sad to report, but I did have enough money to pay our car bill, our food bill and our credit card bill—from one night of work. Lisa made me promise then and there to never quit.

And, for the next 10 months, I didn’t. I saw every corner of L.A., from gangland Compton to stately Bel Air. I kept a journal on the dashboard of the Subaru and wrote down all the freaky stuff the girls would say in my back seat. Sometimes I’d have as many as four women in the car for a bachelor party or boat show convention, where I was the emcee of debauchery. I had never realized just how much men were willing to pay to see a woman eat a licorice rope out of another woman’s privates.

I even got good at the “protection” part of the job. When it came to “my girls,” I did whatever it took to keep them safe— be it washing their sex toys with antibac or convincing a pervy dude I was lethal at karate. And I watched Nikki shove her boobs into dudes’ faces while slyly cleaning out his chain wallet.

By the end of my stint, we had enough material for 10 screenplays. Writing what we knew? We knew too much. There are some things you just can’t unsee.

When Lisa got pregnant with our first child, a girl, we decided it was time to hang up the driving gloves. We assumed we were done with prostitution forever. But then our screenwriting careers took off. MM

Exclusive: See behind-the-scenes pictures from the set of Amateur Night below.

Addario and Syracuse on set

Syracuse (right) on the set of Amateur Night

How to Shoot Virtual Reality: Seven Basics to Launch You Toward Virtual Virtuosity
The Politics of Plot: What Liberal or Conservative Architecture is Your Narrative Constructed Upon?