Flash Forward: Patti Cake$’s Danielle Macdonald and Geremy Jasper are the Duo Responsible for Your Next Summer Jam 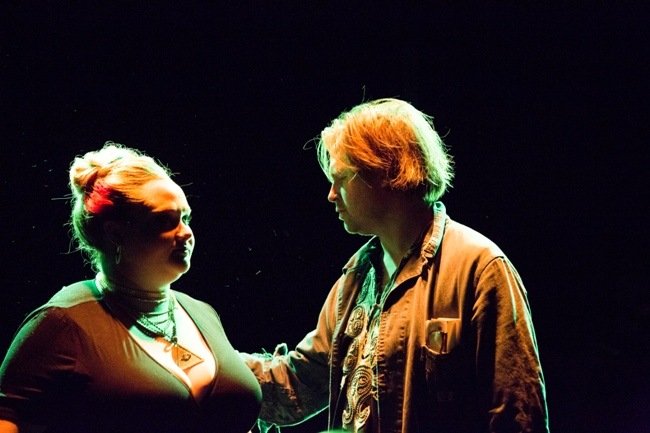 She spits out rhymes with savage ease, and faces her New Jersey combat zone armed only with her enlarged aspirations.

But before the radiant newcomer Danielle Macdonald delivered those delicious verses, playing undiscovered rapper Patricia Dombrowski (a.k.a. Killa P) in the Sundance crowdpleaser Patti Cake$, they had been gestating in the mind of a young man.

“I was Patti,” says Jersey-born Geremy Jasper. “My mom found this bag of all of my diaries, journals and notebooks from when I was 23 and living in the basement. It was crazy to open them up and read some of my diary entries. It was so much like what Patti is going through in the film—that desire, feeling overwhelmed, just wanting to make stuff, just wanting to find someone to make stuff with.”

Jasper makes his feature directorial debut with this hilarious portrait of an artist braving ongoing discouragement because of her appearance, humble upbringing and unexpected creative outlet of rap. Though he’s also acted (in the 2008 short “Glory at Sea,” directed by Benh Zeitlin), music came before cinema for him. “I was a musician first. It was my first love. I’ve been making music in the recording studio since I was 16,” he says. “But I reached a point when I wasn’t as interested in talking about myself in music anymore. I made a bunch of records, and I was just exhausted. I got very interested in how to tell a character story through song, lyrics, melodies, subtext and all those things.”

Music videos, an art form with its own set of parameters, enticed him. The most vibrant testament to that self-discovery is the 2010 video for the pop anthem “Dog Days are Over” by Florence and the Machine, which Jasper co-directed with his wife, Georgie Greville. The now-emblematic video became a sensation.

“I didn’t go to film school, and I didn’t shoot shorts. Directing music videos was my way of figuring out what my style was,” Jasper says. “I’m not interested in some of the more formal rules and restrictions. I really like to experiment and push and combine a lot of different styles.

“Before videos or films, I was a collage artist. I would do these elaborate collages for my old record covers. That’s why I love hip-hop so much: sampling and taking little bits from all over the place and combining them into something fresh. That’s how I like to approach visuals, also.”

Ultimately, his sights set on making a movie, Jasper was forced to find some compromise between that nonconformist streak and the more traditional procedures of narrative. Enter the 2014 Sundance Directing Lab.

“I didn’t know much about the lab, but I knew that this film would need to go through that process to really become what it could be, to make it about Patti as a character.” Guided by advisors (including Quentin Tarantino), Jasper was able to incorporate structure and depth into Patti’s musically defined universe. “Before the labs, the film almost felt like a lot of music videos put together. Going through the labs, I shed that skin, and it really became this young woman’s story. It became a lot more contained. The lab really revolutionized what this film was. It completely changed the whole story.”

The opportunity also connected him with the actress that would eventually embody Patti Cake$’s endearing heroine. Macdonald’s credits at the time included bit parts in TV shows, such as Glee and 2 Broke Girls, and an important role in Amy Berg’s Every Secret Thing. She was cast during the Directing Lab test shoot. In the end, Jasper says, he was unable to imagine the movie without her.

“Working with Danielle, I realized that I could do so much more than I ever imagined. She just brought emotional depth and humor. She could be vulnerable, sexy and strong. All of these characters just had way more depth after I met Danielle.”

The pronounced musical element that the Patti role entailed was a little outside the comfort zone of the 25-year-old Aussie revelation.

“I was always in the back of the choir, because I’m not a singer at all. I never had the confidence to do that, but rapping was kind of different. It was a little less scary than singing for me, because I wasn’t worried about notes. I was more worried about the flow,” says Macdonald. Mastering the genre’s fast-paced delivery took some dedication. “I did so much research, and figured out the history of it, and where it came from and what inspired it. It was a whole new world for me.”

The actress let the strong-willed character, as written on the page, inform her rendition. “Patti definitely inspired me. When I was reading the script, I was like, ‘This girl is going after what she wants.’ I love that she has the balls to just go for it, and she’s not letting anyone stop her.”

That fervent tenacity, in spite of a setting that wasn’t exactly conducive for pursuing showbiz dreams, mirrored Macdonald’s own experience. The actresses’ route to the entertainment industry was just as trying,

“I grew up in a beach town about an hour outside of Sydney, and I wanted to be an actor,” she says. Macdonald’s not a conventional beauty, and she had to make a decision not to let that set her back. “I’m different in this industry. I think there is a lot more diversity nowadays, but when I wanted to do this, there wasn’t that much work. I knew that it was going to be hard, and people told me, ‘You shouldn’t do it,’ but I wanted to go to a place where I could make that happen.”

Saying goodbye to her homeland and moving to L.A. meant confronting the shallowness that still governs what makes it on our screens. “I moved out here not knowing anyone, and I had to figure it out. It was a challenge being halfway around the world without anyone you know. On top of that, it’s an industry that’s very image-conscious. I’m not the ‘ideal woman’ in film, and that was a challenge that I had to overcome.”

Post-Sundance, the actress has been cast opposite Jennifer Aniston in Dumplin’, directed by Anne Fletcher and based on a novel by Julie Murphy. She’s optimistic that the rave festival response to Patti Cake$ and the emergence of directors like Jasper will change the opportunities afforded to her.

“The industry has come a long way. There are now more people from all walks of life, cultures, religions, races, backgrounds and body types, and I think that everyone deserves to be represented on film, because everyone has an interesting story,” she says. “I hope people realize that different is OK. Different people want to be seen. Society is changing, growing, and becoming more trusting. We’re getting somewhere.”

In January, Fox Searchlight picked up Patti Cake$ for a cool $9.5 million—a price tag that says we should all be prepared to go along with her. MM

On the Inside: To Make His Feature Shot Caller, Ric Roman Waugh Learned How to Shoot in a Real-Life Prison
Making a Living by Mixing Media: How to Make the Leap From Directing Features to Directing Television