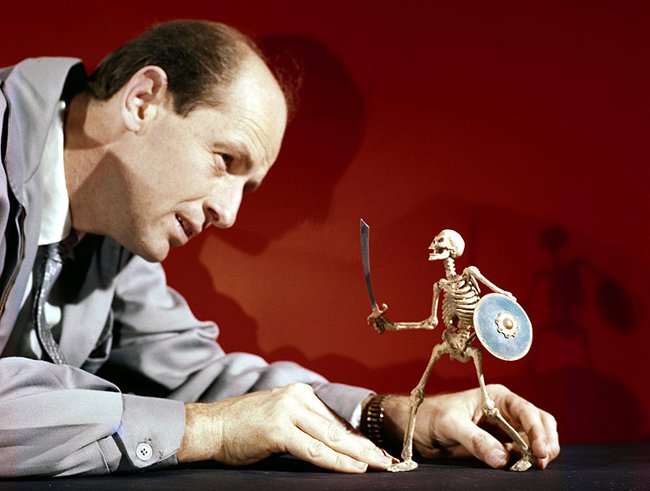 Visual effects pioneer Ray Harryhausen passed away last week at the age of 92.

Long before the days of CGI and motion capture, movie monsters were sculpted by hand and brought to life via stop-motion animation. One of the key innovators during this time was special effects maestro Ray Harryhausen, who created his own unique brand of stop-motion model animation called “Dynamation.” Ray Harryhausen started his movie career as a protégé of special effects pioneer Willis O’Brien (King Kong), who hired him as an assistant animator on 1949’s Mighty Joe Young. Their collaboration won O’Brien the Oscar for Best Special Effects. Amazingly, Harryhausen himself was never nominated for an Oscar, though he was presented with an honorary Academy Award in 1992.

After heading out on his own and creating the effects for several low-budget sci-fi movies, Ray Harryhausen found his niche when he began work on 1958’s The 7th Voyage of Sinbad. Harryhausen’s textured, fluid work was innovative and groundbreaking and is still impressive even by today’s standards. His use of small, sculpted animated figures (filmed against a miniature backdrop) interacting in a live-action environment with real-life actors was surprisingly polished and effective. The success of Sinbad led to an array of movies revolving around Greek mythology, all of which benefited from his revolutionary effects. Harryhausen also served as co-producer on many of these films.

To celebrate his pioneering spirit, join us as we take a look back at some of his most notable creations.

Adapted from a story by Ray Bradbury, this film is notable for being Ray Harryhausen’s first feature solo effort. In the movie, an atomic bomb testing in the Arctic Circle awakens a hibernating dinosaur (called a “Rhedosaurus”) who is rather cranky at having his beauty sleep disturbed and reacts by wreaking havoc on New York City. The film’s popularity helped spawn dozens of creature features in the 1950s, many of which utilized fears of the atomic age in order to scare audiences. Harryhausen made several such films during this period, including It Came From Beneath the Sea (1955), Earth vs. the Flying Saucers (1956) and 20 Million Miles to Earth (1957).

This epic fantasy adventure (the first color film to utilize stop-motion animation effects) proved to be, at the time, Ray Harryhausen’s most ambitious effort. For the film, he created many impressive, iconic creatures based on Greek mythology, including a Cyclops, dragon, cobra-woman and two-headed bird. The story revolves around Sinbad the Sailor (Kerwin Mathews), who must go on a daring quest to save a princess from an evil sorcerer (Torin Thatcher). The film’s effects proved to be a challenge for Harryhausen, who completed the animation sequences in 11 months. Sinbad’s popularity lead to an increase in mythically-themed films, as well as some knock-offs. One of the best imitations is the silly but fun Jack the Giant Killer (1962), which attempts to recreate Harryhausen’s wondrous stop-motion creations, though the end results are bit clunky. Although Harryhausen had nothing to do with the film, several of the cast and crew members of 7th Voyage of Sinbad did—the two films share the same director (Juran), star (Mathews) and villain (Thatcher).

Loosely adapted from the classic novel by Jules Verne, Mysterious Island is about a group of Civil War-era Union soldiers who, after escaping a Confederate prison camp, find themselves stranded on a strange island where gigantic animals abound. Some of these giant creatures, brought to animated life by Harryhausen, include a crab, a flightless bird, bees and marine life. Though the film itself isn’t as well-made as some of Harryhausen’s other credits, his larger-than-life creatures definitely make Mysterious Island worth watching.

Arguably Harryhausen’s finest hour, Jason and the Argonauts remains one of the greatest and most influential fantasy films ever made. The movie follows the legendary Greek hero of the title (played by Todd Armstrong) as he leads a brave team of adventurers on a perilous quest in search of the mystical Golden Fleece. Their journey brings them into battle against harpies, a giant bronze statue, a hydra and a skeleton army, all brought to life thanks to Harryhausen’s wizardry. The movie’s most unforgettable and impressive sequence, in which Jason takes on a horde of swash-buckling skeletons, was vividly re-created as an homage to Harryhausen’s work in Sam Raimi’s Army of Darkness (1993).

After a 15-year break, Sinbad returned to sail the seven seas in this rollicking adventure in which he must protect a mystical golden tablet at any cost. Filling in for Sinbad is John Phillip Law (Barbarella, Danger: Diabolik), with Tom Baker (“Doctor Who”) as the evil magician Koura and Caroline Munro (The Spy Who Loved Me) as buxom slave-girl (is there any other kind?) Margiana. Though the film doesn’t quite live up to its predecessor, it’s still a lot of fun, with an array of eye-popping creatures, including a one-eyed centaur, a wooden figurehead come to life and a griffin. Harryhausen’s third and final Sinbad film, Sinbad and the Eye of the Tiger, was released in 1977 and starred Patrick Wayne (John Wayne’s son) as the title character.

This lavish fantasy-adventure marked Ray Harryhausen’s final feature film credit. Once again the story delves into Greek mythology to tell the legend of Perseus (Harry Hamlin), who must embark on a dangerous journey to rescue Princess Andromeda (Judi Bowker). The impressive supporting cast includes Maggie Smith, Claire Bloom, Ursula Andress, Burgess Meredith and Laurence Olivier. The film also features some of Harryhausen’s most amazing mythical creatures, including Pegasus, a mechanical owl, a two-headed wolf, giant scorpions, the Kraken and an incredibly creepy-looking Medusa—perhaps the scariest monster Harryhausen ever created. Clash of the Titans was a hit at the box office and led to a popular 3-D remake in 2010, starring Sam Worthington and Liam Neeson. The original film’s success was proof that old-fashioned but effective stop-motion effects could still impress audiences, and served as a fitting swan song for the late, great Ray Harryhausen.

Have a Ray Harryhausen favorite that didn’t make the list? Let us know in the comments!

Continue Reading
Advertisement
Related Topics:clash of the titans, jason and the argonauts, mysterious island, ray harryhausen, stop-motion animation, the 7th voyage of sinbad, the beast from 20000 fathoms, the golden voyage of sinbad

Venus and Serena: A doc about two of the best tennis players in history goes for a winner
by Kyle Rupprecht
The Fire Inside: Jason Segel Resurrects The Muppets