Why I Kept Anthony Hopkins Inside for The Father 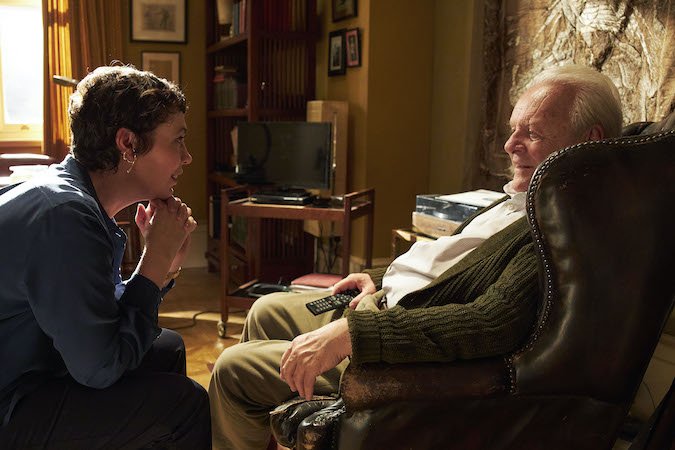 After Florian Zeller published his 2002 debut novel, Artificial Snow, at age 22, he was invited to write a libretto for an opera, which helped him realize his love of writing for the stage. That led to a thriving career as a playwright that includes The Father, the story of a daughter whose father has dementia, but refuses help. Zeller has just made his directorial debut with his astonishing screen adaptation of The Father, starring Anthony Hopkins in the lead role, and Olivia Colman as the daughter. It unfolds from the perspective of Hopkins’ character, Anthony, who tries to hold onto order as it slips away. In this feature Florian Zeller writes about adapting The Father from his play into his debut feature.

I was raised by my grandmother. She was a bit like my mother, and I was very close to her. And when I was 15, she started to suffer from dementia. The play The Father has a very universal theme, meaning that everyone has a father or grandmother, and everyone has to deal with this kind of dilemma: What do you do with the people you love when they start to lose their bearings? Everyone is concerned by this issue. So maybe we could share it. Because when you go through difficult or painful experiences, most of the time, you feel as if you are the only one to experience it.

The thing is, I really didn’t want to tell that story from the outside. We can feel empathy only if we try to tell the story from the inside. And I thought it would be exciting for me as a writer to play with the audience, and with the feeling of disorientation. I wanted to create a complicated structure in the narrative, to make the audience feel as if they were going through a labyrinth. Because I really like to put the audience in a very active position — not just to ask them to sit and to watch the story, but to be part of the narrative and to question what they’re witnessing and to be asking questions all the time.

Because we are basically in the main character’s head, we are starting to lose our own bearings. The film is like a puzzle. And you can play with the pieces, you can play with all the combinations, but in a way it will never work, because a piece will always be missing. 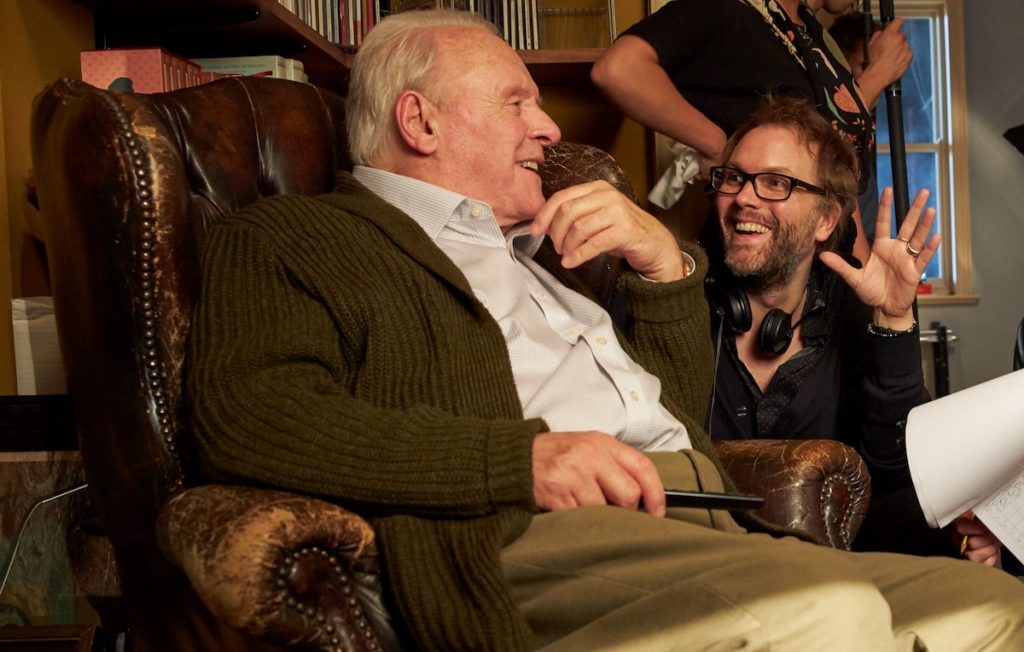 When you think about adapting a play, the first advice you get is always to try to go outside and to create outdoor scenes, to make it more cinematic. And it’s a temptation. But in this precise case, I made the decision not to do that, and to dare to stay in almost one room, in one apartment. And I made a decision to shoot the whole film in a studio, in order to be able to use the sets to create this feeling of disorientation in the audience.

Story continues after this link to Florian Zeller on the MovieMaker podcast:

So at the beginning of the story, we are in an apartment, which is Anthony’s apartment, there is no doubt about it. We recognize his space, his furniture, his knickknacks. And, step by step, we begin to doubt where we are. Small details in the design change. From scene to scene, I changed proportions, I moved a wall, and the furniture. You recognize a painting, but it’s not at the same place. In the first 10 first minutes of The Father, we see the apartment is green and yellow, and step by step, we go to blue. And then the blue becomes lighter and lighter. So it’s like traveling while staying in the same very same place.

When I started to dream about making the movie — because everything starts with a dream — the first and only face that came to my mind was Anthony’s. I had the intuition that he would be absolutely powerful in it, probably because we know him through all his parts as someone who is always in control, very intelligent. And I thought it would be powerful to see him in a world where intelligence is not useful anymore, to see him losing control. In a world that is very rational, but with no logic anymore.

And that’s the reason why when I wrote the script, the character’s name is Anthony, because it was a way for me to be connected with him. And to make him understand that it was really written for him. It was not an easy dream to fulfill, because it’s my first feature film, and I’m French, and he’s Anthony Hopkins. But my feeling was that until someone comes to you, and explains to you that this is not possible, it means that potentially it is possible.

So I just tried. I sent the script to his agents. And one day, I received a call from his team letting me know that he wanted to meet with me. So I took a plane to Los Angeles to have breakfast with him. 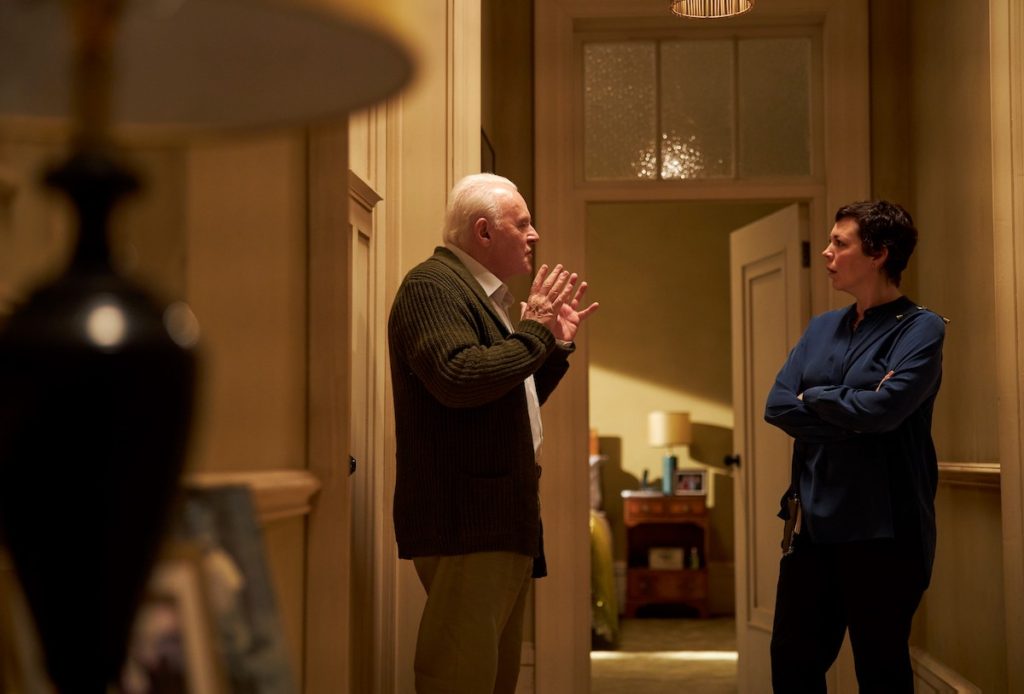 Anthony Hopkins and Olivia Colman in a scene from The Father, written and directed by Florian Zeller. Photos by Sean Gleason / Sony Pictures Classics

You’re always impressed when you are meeting with someone like Anthony Hopkins, but at the same time, after two minutes, I knew that he would be easy to work with because he’s so intelligent, of course, but also humble. Which is to me the signature of the greatest.

“Humble” means he leaves room for collaboration. And during all the shooting, he allowed me to make the film I really wanted to make — every shot, every angle, every situation, everything was exactly what I wanted to make. And so he gave this to me, which was a real gift. If you don’t like the film, it’s really entirely my fault.

Also read: Joe and Anthony Russo on Cherry: ‘A Movie Can Live or Die By Its Tone’

It was the same with Olivia Colman, because she’s also very humble and very dedicated to the story. I had seen her on stage a few times in London and have always adored her as an actress. I think she’s the greatest English actress. And also, she has something magical about her, in that as soon as you meet her, you love her. And we needed to create empathy with that character immediately.

When you write, when it’s too painful, when it doesn’t work, it means that you’re not going in a good direction. Something has to be easy, because it’s a lot about dialogue, and dialogue goes fast. But at the same time, it is painful, because you have to fight against yourself all the time, against the fear.

As told to Tim Molloy

Barry Jenkins’ The Underground Railroad Teaser Is Gorgeously Haunting
18th and Grand Traces L.A. History Through a ‘Palace of Violence’