The Djinn Directors: How Shooting Our Horror Film In Silence Made It Better 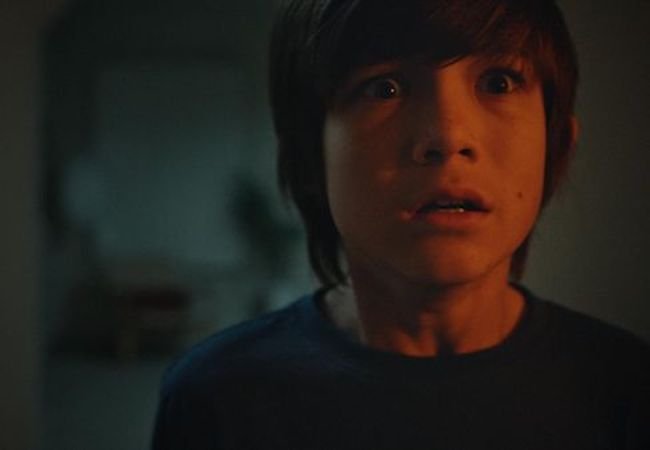 Justin Powell and David Charbonier are the directors of the highly praised new IFC Midnight horror film The Djinn, about a mute twelve-year-old (Ezra Dewey) who discovers a mysterious book of spells he hopes will give him a voice. But a sinister Djinn arrives to collect his soul. In this piece, Powell and Charbonier write about how limitation made their film better — and scarier.

Rarely in life are you ever presented with the perfect set of circumstances. This goes double for when it comes to movie making. It was the summer of 2018 when we learned what was supposed to be our first movie got postponed – potentially cancelled. Up to that point we had spent almost eight years trying to do things the “right way” to get a movie made. We had written half a dozen scripts, had countless meetings around town with companies and producers, and heard about every excuse in the book about why it was a pass. It was a dead end. So after all that – finally getting a company willing to take a chance on us only to pull the rug out – we decided to take matters into our own hands.

This is what led us to making The Djinn despite having extremely limited resources and virtually no money. Money, of course, is the most important thing you need when making a movie. Money first, then creativity. We only had creativity. But we crafted a story around what little we did have. In this case, a few connections to some talented people – friends mostly – and an apartment. Oh, and only a month. Only a month because the lease on the apartment was about to expire and then we’d have no location. So we wrote quickly, cast quickly, and pieced the production puzzle together as best we could.

But even with all the creativity we could squeeze out between the two of us, there was always the obstacle of lack of funds. We had to make a lot of compromises if we stood a chance of actually pulling this off. So early on we accepted the reality that aspects of the production would have to be a bit more… guerilla. From the start we knew there were some things we’d have to sacrifice. Shooting in Los Angeles and knowing the cost of permits, that was an immediate no go – an expense we couldn’t afford, not if we were to make this ourselves.

“OK, fine,” we said. “Let’s try and do this on a shoe string budget — small crew, guerilla approach, no permits.”

This is where we would like to note to any readers that if you’re able to support the cost of doing things the “right way,” like by getting permits, you should definitely do so. If nothing else, for the peace of mind it will afford you in knowing your production won’t get shut down and that you’ve basically lost all the time, energy and money you’ve just put in. For that and that alone it’s worth the expense. But alas, we didn’t have that luxury, so we took the gamble.

(Side note: When it comes to making a movie there really isn’t a “right way.” The right way is the way that gets the movie made.)

With all this in mind, we tried to tilt the table a bit in our favor. No permits meant we had to keep a low profile. But how could we do that when we were shooting in a small apartment, surrounded by six other small apartments? In an ideal world, we could have just given a head ups to everyone, but we knew some of the neighbors were not so chill. They’d snitch. We couldn’t take that chance. So we changed what we could control — the sound level.

We tackled this from a production standpoint: skeleton crew, gentle footsteps on set, smoking area around the block. But also approached this from a story perspective. We’d have to make a movie that was almost silent, but still a horror movie. Most characters in horror movies at some point scream, right? They yell for help, they shout in terror, they make noise. But we could have none of that, or we’d be the ones left screaming.

So we made our main character mute. This started as a restriction born from our limitations, but quickly brought a strength and uniqueness to the story. It also allowed us the foundation to build a strong emotional core at the heart of the conflict.

By making that decision, which was a direct consequence of our restrictions, everything else fell into place. This was a unique situation in that we didn’t first have a story before deciding we were going to make a movie. This was in direct contrast to how we had approached things in the past. Usually we write a script and spend months, in some cases years, rewriting, workshopping, taking notes, developing ad nauseam. But what is the point of a script? Is it to have a perfect document with beautiful words? Or is it to make a movie?

If you answered the latter, you win a prize and should not be a studio executive. A script should only be looked at as a blueprint to the movie you want to make. At the time, we had quite a few beautifully polished blueprints, but no movies to show for them. Defeats the purpose. So with this, we greenlit ourselves and wrote the story based on what we had and what the limitations were.

Our crew was small, but everyone was on board with the rule of quiet. Our set was something like a Quiet Place, with the undefined monster being the threat of getting shut down. Fortunately, we consider ourselves very visual storytellers, so story-wise we don’t like to lean on dialogue to tell a narrative or explain a character’s internal struggles. Those can usually be achieved by thoughtful visuals and planning.

From a production standpoint, most all the loud sounds and jolts were added in post. Anything we knew had to be done on set, like action stunts or scares, we planned to do during the day when a bit of noise wouldn’t be too obtrusive.

But the movie takes place primarily at night, which meant blacking out the windows. It also meant that we couldn’t have any fancy lights beaming moonlight in from outside, not only because the windows now needed to be blacked out, but also because fancy lights draw attention. Thus, a new story element was born: once The Djinn arrives, Dylan and his apartment are trapped in a black void, excusing the extreme darkness outside. This also led to us shooting almost entirely with practical lights, which incidentally helped ground this fantastical film in reality.

So as crazy as it may sound, shooting without permits not only shaped the logistics of production, but the very story itself. We’d like to think we would have still crafted a unique and exciting tale if we hadn’t been working with these restrictions, but one thing is certain: If we’d shot with permits, the story would have been very different. In all likelihood, even the title character, The Djinn, would have been another sinister force entirely. And that’s the beauty of what we learned from this experience: sometimes your greatest limitations lead to your best ideas.

The Djinn is now playing inselect theaters nationwide, and is also available on digital/VOD everywhere you rent movies, from IFC Midnight.