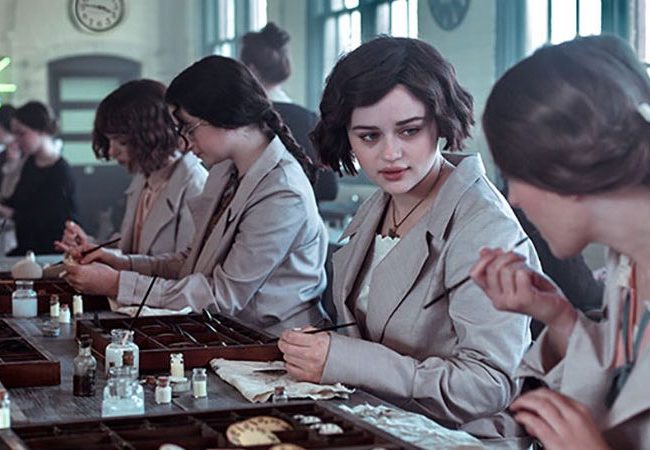 Radium Girls was born when Ginny Mohler came across a curious passage while working as an archival researcher in 2012.

“I was looking into sources on the Manhattan Project and developing the atomic bomb when I stumbled across this very cryptic reference that said, ‘We all remember the tragic dial painters of World War I.’ And they’re talking about health and radioactivity, and I had no idea what they were talking about,” Mohler tells Eric Steuer in the new MovieMaker Interviews podcast, which you can hear on Apple or Spotify or above.

“So I Googled it and found myself on the Wikipedia page called The Radium Girls. And that was the beginning.”

During World War I, soldiers needed the dials of their watches to glow in the dark. And women were deemed best suited to the delicate work of applying radium to make the dials glow, she said. That led to an industry around radium — which was seen at the time as an almost miraculous element.

Radium Girls, co-directed by Mohler and Lydia Dean Pilcher and starring Joey King, is based on the true story of a group of young female factory workers in the 1920s who worked with it — but soon began developing mysterious, terrible illnesses.

After a medical mystery that included a misdiagnosis of syphilis for some of the victims, the women banded together to fight for their health, safety and rights.

The film was also the product of women working together. Almost everyone involved in the production was female, including the producers and Mohler’s co-writer, Brittany Shaw. (One exception was a male cinematographer.)

And the spirit of collaboration has continued with the rollout of the film. With so many theaters closed across the country, Radium Girls is available through virtual screening rooms, in a model in which the theaters receive part of the revenue for ticket sales. (Here’s a link for the AFI Silver virtual screening room, and one for Brookline, Massachusetts’ Coolidge Corner Theater, one of our favorite indie theaters.)

Pilcher said several scientific-minded groups have watched the film together to start conversations that can inspire change like the radium girls inspired a century ago.

“So we have groups like the National Association of Science Teachers, the International Society of Women Engineers, different climate groups, different science groups,” she said. “And it’s really exciting to it’s really exciting to bring all these people together. Jenny and I are doing Q&As to talk to them. And that’s the social impact part, which is one of the big reasons why I do what I do.”

She added: “We’re in a disruption right now. It’s a disruption that probably needed to happen for some time. And I think that this idea of the virtual cinema for indies is really great. And it really does allow filmmakers to connect directly with their audiences. And it’s an amazing opportunity. I think, you know, for all the things that the pandemic has taken away from us, this has been a gift.”

If you like this episode of MovieMaker Interviews, you can find more MovieMaker podcasts here. Please subscribe and review for new episodes almost every day.