by MM Editors"> The Coolest Film Festivals in the World, 2013: Short and Comedy Festival Winners by MM Editors - MovieMaker Magazine

The Coolest Film Festivals in the World, 2013: Short and Comedy Festival Winners
by MM Editors 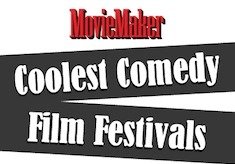 https://www.moviemaker.com/the-coolest-film-festivals-in-the-world-2013-short-and-comedy-festival-winners-by-mm-editors/"> by MM Editors
&BODY=I found this article interesting and thought of sharing it with you. Check it out: https://www.moviemaker.com/the-coolest-film-festivals-in-the-world-2013-short-and-comedy-festival-winners-by-mm-editors/">

This week we’re announcing our 2013 Coolest Film Festivals in the World results, voted by YOU, two categories per day – leading up to the Top 25 General Festival winners on Friday, 11/15! Today it’s our second pair – Short Film Festivals and Comedy Festivals. For the full article and list of results, pick up a copy of our Fall 2013 issue, hitting stands any day now!

(The following introduction opens the full article in the Fall 2013 issue.)

What makes a film festival the Coolest? Is it a combination of quality cinema, great parties, and free swag? Or is it an alluring mix of hip, alternative venues and shoestring-budget, hyper-indie films you might not get to see anywhere else? What about the opportunity to gawk at celebrities, connect with fellow moviemakers, and take advantage of free travel perks? These are just some of the many factors we pondered before we could even begin to quantify the coolest film festivals on the planet this year. On top of all that, the MovieMaker team couldn’t possibly attend all the festivals in the Los Angeles area, much less the world—the territory this list’s title so ambitiously encompasses. So we decided to solicit a little help from our friends.

It dawned on us that the best way to create this list was to ask our readers to offer up their experience and opinions. After all, we know the collective MovieMaker readership has the goods on almost every festival out there. So instead of choosing 25 festivals ourselves as we’ve done in the past, we asked our readers to nominate and vote for what they see as the coolest. We also broke our list down into categories to reflect the increasing diversity on today’s festival circuit. While still naming 25 coolest “General” Festivals—all-encompassing fests that don’t discern their selections by genre—we also named the five coolest fests in 10 new genre-specific categories. Running the gamut from “Horror/Sci-Fi” to “Documentary” and “Shorts” and the smorgasbord that became the “Other” category (including animation fests, sports fests, 3D fests, you name it), just about every conceivable kind of festival is represented. Over four months, we received more than 15,000 votes and enlisted the help of Hone, a visual survey platform that simplified our crowd-sourcing efforts (check them out at gohone.com). It’s important to note that the following 76 festivals are presented without any particular hierarchy or order—if you made it in, you made it in!

One good thing leads to another: among this year’s films is “Shenanigans,” created after being voted the best script by last year’s DC Shorts’ audience.

Alternative Locations Across the US / 2014

The lazy cinephile’s Sundance! Complete, we hope, with the best in microwavable popcorn.

“Keep it Short!” proclaims MSFF. We too enjoy a good dose of cinematic brevity.

The Reykjavík Film Festival was developed as a springboard for Icelandic filmmaking by providing inspiration and encouragement to the public.

Panels this year included a Digital Distribution for Short Film event, featuring guests from VOD companies Vimeo and Distrify, and a talk with Aardman Animation’s Will Becher.

With comedians like Jane Lynch and Adam Carolla as past participants, this festival must not be short of laughs!

Various locations throughout Australia, the Netherlands, and United States

“Unlike the snooty content prominent at most conventional film festivals,” say the organizers of LOLSFF, “these films won’t challenge you to be a deep thinker or ponder man’s inhumanity to man.” Whew!

A festival of “giggles and gore,” Bonebat provides a perfect blend of horror and comedy to make audiences scream with laughter!

HYF screens twice a year in two different states. Hell yes! They literally took the words out of our mouths.

Sincerest thanks from the MovieMaker team to everyone who participated in the compilation of this list. To the runners up that didn’t make the final five in each category, we send our condolences, and thank you for your voting. There’s always next year. Glad to see your favorite film festival on this year’s list? Think you have a cooler festival than these up your sleeve?  Tweet at @moviemakermag, tag us on Facebook (MovieMaker Magazine) or leave a comment! MM