Every horror moviemaker wants to nail their big effects—it’s a universal concern throughout the genre. But not everyone has cash to spend on lavish CGI.

And not every movie needs CGI—after all, nothing feels more, well, magical than an ingenious practical effect. So we asked Hiroshi Katagiri, a makeup and practical effects master, to show us the ropes on thinking cheap ‘n’ scary.

Born in Japan, Katagiri moved to the U.S. at 18 to pursue a career in special makeup effects, becoming a primary artist at Stan Winston Studios. He has worked as a creature designer on films such as Wolverine, Pirates of the Caribbean, Alien vs. Predator: Requiem, Cabin in the Woods and The Hunger Games. He was part of an Emmy winning team for The X-Files, and has made several acclaimed horror shorts. Gehenna: Where Death Lives is his own indie horror feature, featuring actor Doug Jones and an all-star effects team.

Katagiri with Doug Jones, made up for Gehenna: Where Death Lives

How do you create scary, high-quality horror effects and creatures with your modest indie budget? These tips aren’t all quick “tricks;” sometimes it’s about attitude and perspective—and sometimes it’s more about what not to do.

Remember that gratuitous effects may not always be right for your film. The Exorcist‘s effects were amazing for the time, but there was a scene where lead character Regan’s limbs get inverted and she walks like an spider—which they deleted, because they felt the shock factor wasn’t in keeping with the rest of the film. One of the scariest scenes in that film is when Regan suddenly turns into Father Merrin’s mother. That required no effect at all, yet was an extremely powerful scene on a narrative level, because Merrin’s mother had just died.

In Gehenna, I was tempted to use CGI to create a creature skinnier than any human could be, but I created a puppet instead, altered the lighting and angles, and saved thousands. Legendary creature actor Doug Jones was so impressed with the design, he made a video for me to use in my Kickstarter campaign.

All that said and done: Follow these principles to pull off truly effective scares, no matter what your budget is.

1. Before You Make it, Source it

There are prop places only too happy to rent items like skeletons, dead bodies, and life casts that might fulfill your needs, so that you don’t have to engage in the expense of creating from scratch. Also, consider eBay, especially in the days or weeks after Halloween. This is a key time for horror moviemakers to capitalize on props from recent haunted houses, etc.

I had a body suit that I had originally created for a character in Buffy: The Vampire Slayer. Something told me I should save it. Sure enough, I had a need for The X-Files that allowed me to slightly modify and repaint the suit from Buffy, which brought the effect in under budget, without any decrease in quality. Keep in mind that this strategy doesn’t only work with repainting—it also works if you simply reuse a mold, so save the molds too. I have the benefit of having been in the industry for a couple of decades, so I have accumulated lots of stuff. You should see my garage.

If your film features vampires, consider the setting of your effects-heavy scenes. If it is a twilight setting, a pale face will show best, fit the character, make the character scary, and thus already convey some of the effect without any expense. Watch how they did this on The Lost Boys (1987). Look out for prosthetics and makeup tricks—you’ll be surprised how simply much of the film’s effects were created by those elements.

4. What You Don’t Show is Just as Important

If your initial effects are believable from the get-go, then as the film progresses, you’ve already convinced the audience to suspend their disbelief, so you have more latitude in later scenes. In my short horror film, “Pulse,” I had a creature that basically consisted of just a torso. I used a very realistic puppet for early scenes, but when it came time to make the torso move across the floor, I needed to use a real actor. I tested this with the actor wearing black pants against a black background. This worked: The viewer could not see the performer, but they already believed in the creature, and I saved on effects.

Be a student of the history of effects, and study up on old classics to learn how those masters did their effects. I guarantee you that their tricks will be much less inexpensive today! One of my favorite examples of smart effects is the original Frankenstein (James Whale, 1931)—it’s amazing what they did with latex, cotton and tissue. Tissue was then used again in Karl Freund’s 1932 The Mummy. Latex goes back to the 1700s, is a natural rubber, and very versatile.

Following the last tip, if you learn the properties of common substances used for effects, you can often come up with alternatives to the heavier financial investment of sculpting. I grew up in Japan, and learned a lot from watching Japanese TV. Many effects on the original Power Rangers show seemed like they were done via sculpting (creating a mold, casting, and then painting). Not so—many of those creatures were actually foam, curved and shaped. I learned this and tried it out; the effect has worked for me very well and saved big bucks.

7. Focus on the Heads

Watch the original Evil Dead (1981). Notice how the eyes of all the characters draw your attention? That’s what humans do, naturally: They look at a creature’s head, face, eyes, and mouth, and not so much at the rest. This is known in magic as misdirection. If costs will increase on effects covering other body parts below the neck, ask whether that is necessary. Instead, consider doing more close-ups, spending more effort dressing up the places where the viewers’ eyes will naturally go.

In the effects business, the phrase “you get what you pay for” isn’t always true. Free is possible. You already know you can find good royalty-free music for free, right? Maybe there is stuff in your kitchen that makes the exact sound effect you need for a creature. “Thinking outside the box” is such a cliché, but cannot be underestimated. Train yourself to identify the core nature of the effect you want or need, and then look for a better solution than the first one that comes to mind. 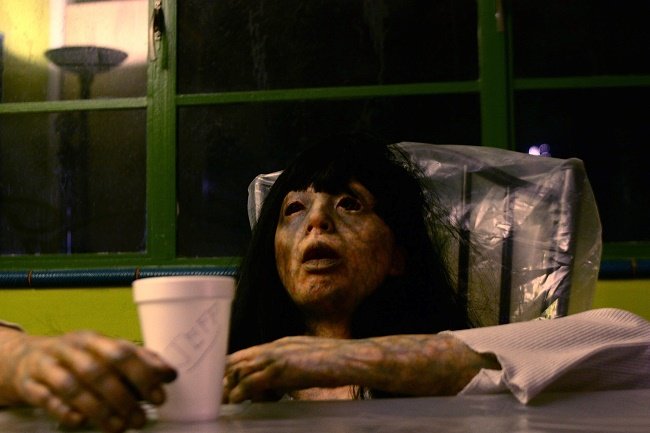 9. Warning: Hair Can Get Hairy

As an indie film producer, you need to manage your expectations and use your limited assets to your advantage. You have an asset in your people, so use them. Remember: Your actors can act, and often that’s enough to sell an effect. Ask them to do a scene that requires effects without any effects. See what they bring to the table naturally, and then fill in the gap. Ask for opinions on the effects from other people on your team, because you never know where a good idea might come from. MM

The campaign image for Gehenna: Where Death Lives features Jones

Snowpiercer: An Interview with Composer Marco Beltrami
How to Save Your Movie: Lessons in Continuity from The Infinite Man