Tesla: Ethan Hawke and Michael Almereyda Reunite for Another Story of a Man Out of Time 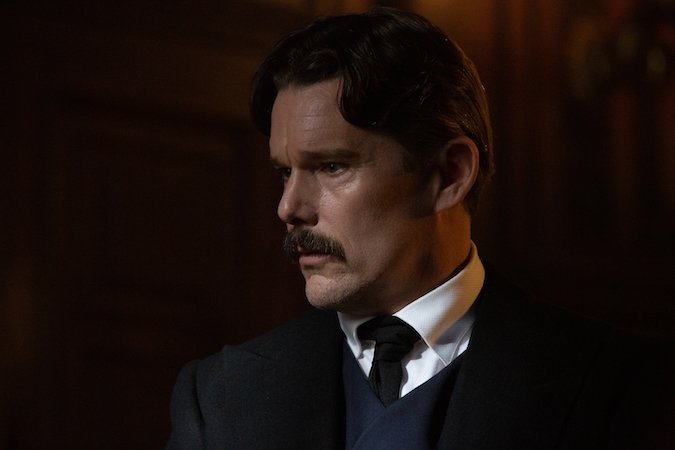 There’s a great moment in Tesla, the unconventional new Michael Almereyda biopic about the visionary inventor, when Nikola Tesla (Ethan Hawke) plunges a soft-serve ice cream cone directly into the heart of Thomas Edison (Kyle MacLachlan) — or at least onto his waistcoat. They’re arguing about the virtues and vulnerabilities of alternating current, the innovation that would become Tesla’s biggest claim to fame and threaten Edison’s direct-current empire. The action freezes and a narrator interjects: “This is pretty surely not how it happened.”

Full of historical what-ifs and self-conscious anachronisms — including iPhones, laptops, roller skates, and a truly glorious rendition of a Tears for Fears song — Tesla is more interested in reflecting the interior state of its introverted protagonist than in historical precision or big-budget razzle dazzle.

“I thought that if there was a way to get at the indignation and humiliation that Tesla faced with Edison,” Almereyda says, “ice cream would come into play. When Ethan read the script, he said, ‘We need more things like the ice cream scene!’ That was the tip-off telling me I could lift the ceiling and heighten that approach.”

It’s difficult to think of a collaborator better suited to Almereyda’s rigorous creative method than Ethan Hawke, who helped write the script and plays the Serbian-born genius with taciturn gusto and a perpetually furrowed brow. Both are cerebral, curious people who have steered their careers by following their intuition and interests rather than paychecks or popularity — something they both have in common with Tesla himself, perhaps. All three are idea men, and as the films shows us, ideas are almost always at odds with commerce.

For all his star power, Hawke has almost religiously avoided big-budget pictures in favor of arthouse fare, recently working with moviemakers like Paul Schrader (First Reformed) and Hirokazu Kore-Eda (The Truth), and directing Blaze, a freewheeling biography of obscure folk musician Blaze Foley. He’s joined forces with Almereyda twice before, most notably in the Gen-X update of Hamlet (2000), which also starred Kyle MacLachlan.

Who can forget the brilliant restaging of Hamlet’s “to be, or not to be” soliloquy in a dingy Blockbuster Video?

“It was anachronistic in the most perfect way,” Hawke says. “Michael has a unique vision for how to tell a story that allows it to vibrate on an original wavelength.”

Almereyda might not be a household name outside of indie circles, but you would be hard-pressed to find a filmmaker with a more vibrantly eclectic body of work: He’s like a fusion between Baz Luhrmann and Hal Hartley, with what one imagines to be an intimidating book collection. He’s made essay films, documentaries, docufiction hybrids, shorts, and narratives spanning subjects from urban vampires (Nadja) to rural family dysfunction (Twister). He’s even edited a volume of writings by Russian futurist poet Vladimir Mayakovsky. More recently, Almereyda has unpacked the ethics of social psychologist Stanley Milgram in The Experimenter and used a sci-fi framework to explore loss and memory in Marjorie Prime. Tesla is his sixteenth feature film.

Influenced in equal parts by Derek Jarman and episodes of Drunk History, Tesla unfolds like a dream reconstructed as a collage. Photographic backdrops and shimmering rear-screen projections stand in for physical locations, while historical events—both real and imagined—overlap. When we first meet Tesla, he’s newly arrived from Europe, working in Edison’s New York lab. These interior scenes are some of the most gorgeously rendered in the film; Almereyda’s frequent director of photography, Sean Price Williams, finds deep painterly shadows and illuminates faces with intimate flickering flames. 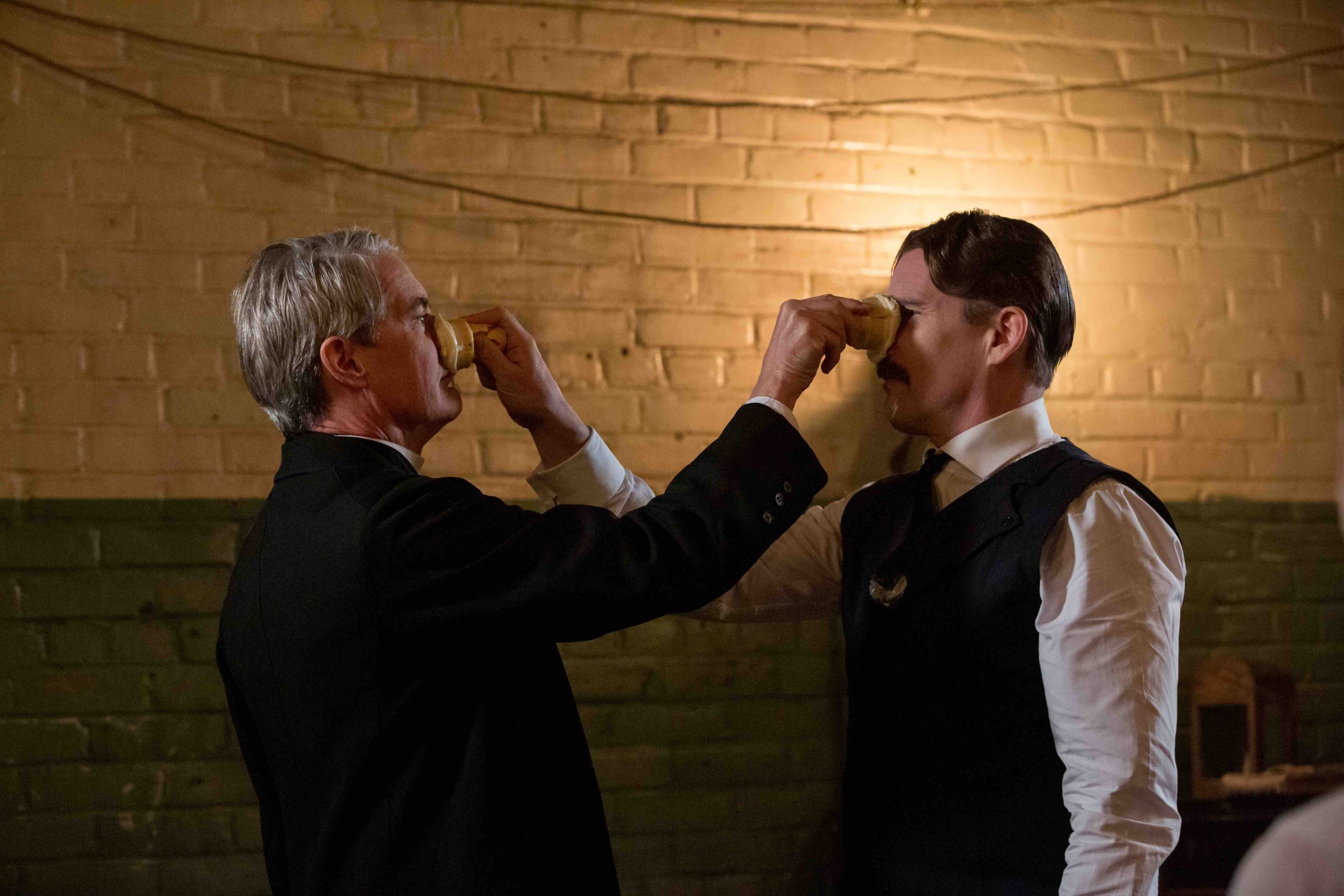 Given that the movie is about the minds that managed to harness light, it’s fitting that the most basic element of filmmaking is transformed into something godly.

“Eventually, we’ll be able to see in the dark,” Edison prophecies when the generator falters and his employees are shrouded in darkness.

Tesla’s European temperament is shown to be at odds with Edison’s bombast, and he’s frequently told he doesn’t understand the American sense of humor. Ethan Hawke hardly cracks a smile, and he transforms his voice, which has grown huskier over the years, into a whispering growl. Tesla may be ill-equipped to relate to others emotionally, but he’s gifted at relaying ideas. Hawke delivers his lines with such concentrated conviction, sometimes it seems laser beams might shoot from his eyes. In preparing for the role, he read as many of Tesla’s essays as he could find.

“I would challenge myself to memorize his expressions, intonation, and the ways he phrased things,” Hawke says. No one knows what the real Tesla sounded like, so the actor was free to create a voice, accent, and cadence. “I imagined that when my Tesla may have learned English, he learned ‘British’ English, and he wanted to intimidate others and hold power in a room with his speech, to sound as smart as he really was — and adapted a unique way of talking.”

Hawke’s Tesla speaks in poetic turns of phrase; when it’s clear Edison has no interest in his induction motor, for example, he says to himself, “Nothing grows in the shadow of an oak,” and strikes out on his own. Sinking into near obscurity, he takes odd jobs — including digging ditches for power lines —before partnering with George Westinghouse (a jovial Jim Gaffigan with mutton chops) and eventually securing funding from the famous banker J.P. Morgan.

An excellent Eve Hewson plays Morgan’s daughter Anne, who helps broker the deal and clearly harbors feelings for Tesla. Though a flirtation with stage superstar Sarah Bernhardt (Rebecca Dayan) is teased, Anne is the only character who achieves something resembling intimacy with the antisocial inventor — and she also serves as the film’s narrator. Dressed in gothic frocks fastened with infinite tiny buttons, she frequently interrupts the narrative to share stats from her shiny silver MacBook. She notes with disapproval that a Google search of Thomas Edison yields twice as many results as a search for Nikola Tesla. As much as Anne loves Tesla’s ideas, she is clear-sighted about his shortcomings: “A man who claims not to care about money can find himself tormented by the lack of it,” she tells us. Tesla’s visions are thwarted again and again: finances disappear, business deals go sour, patents are stolen, contracts are torn up. Anne wonders if things might have been different if only an “enlightened hustler” had helped “to steer him through the crass commercial world.”

Continue for more of Michael Almereyda and Ethan Hawke on Tesla